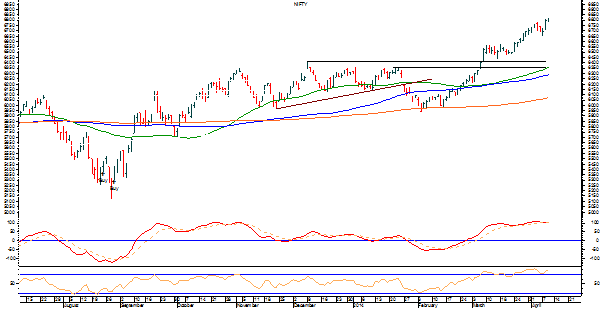 As we had mentioned in our yesterday’s edition of Daily Market Trend Guide, the Markets have not yet achieved a clear breakout. Yesterday it consolidated and today as well, expected the Markets to open on a modestly negative note and look for directions. The Markets are likely to remain in corrective mode as lead indicators continue to show signs of tiredness while remaining in “overbought” territory.

For today, the levels of 6820 would continue to act as immediate top and resistance. The supports exist much lower at 6740 and 6705 levels.

The RSI—Relative Strength Index on the Daily Charts is 76.7867 and it does not show any failure swings. It continues to trade in “overbought” zone and also, the NIFTY has set a new 14-period high whereas the RSI has not and this is a clear Bearish Divergence. The Daily MACD trades above its signal line but it is likely to give a negative crossover in a day or so.

On the derivative front, the NIFTY April futures have shed over 9.28 lakh shares or over 5.33% in total Open Interest. This very clearly signifies offloading of positions wherein the FIIs have remained net sellers in yesterday’s session.

Going by the pattern analysis, the Markets continues to remain in “overbought” territory and as we mentioned in our yesterday’s edition of Daily Market Trend Guide, the Markets have not yet given a comprehensive breakout on the upside while it attempted to move past the previous high of 6776.15. Given this fact, this levels is likely to hold as immediate top for the Markets and today the Markets are likely to continue with its corrective activities.
All and all, we continue to reiterate our advice to stick to defensives like IT and Pharma wherein we have seen massive addition of Open Interest over past sessions. Further to this, the Markets are very less likely to clear its previous highs and continue with its corrective activities. Because of this, it is advised to maintain moderate exposures in the Markets while adopting high degree of caution for today. 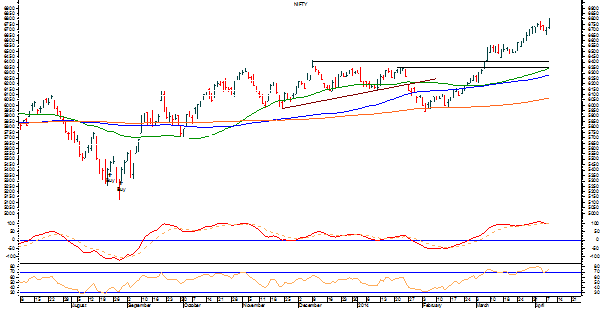 Though the Markets have moved past its previous highs to form a new one, it has not yet achieved a clear cut breakout on the Daily Chart. Today, the Markets are expected to open on a flat to modestly negative note and look for directions. The start is expected to be little subdued and it would be important to see if the Markets continues with its up move while remaining in extremely “overbought” territory with negative divergence.

The lead indicators show all signs of weariness in the Markets. The RSI—Relative Strength Index on the Daily Chart is 76.7761 and though it does no show any failure swings, it continues to trade in extremely “overbought” condition. Further, the NIFTY has set a new 14-period high whereas the RSI has not and this is a clear Bearish Divergence. The Daily MACD once again reports a positive crossover as it now trades above its signal line.

On the derivative front, NIFTY April futures have added over 7.21 lakh shares or 4.52% in Open Interest.

Going by the pattern analysis, as mentioned, the Markets have not given a clear cut breakout on the Daily Charts. It would be important to see if it gives a breakout today but that would come with the Markets being heavily “overbought” and would put a big question of sustainability on the up move. The second most important thing is that the Markets have now entered a “euphoria” stage and it is very clearly evident because of the fact that the Markets have moved up despite all technical factors remaining against it. This make the current up move more risky and prone to equally sharp correction at one point of time.

All and all, the Markets have caught a level of frenzy and we would very strongly advise retain investor to refrain from creating shorts. At the same time, the fresh purchases should be extremely limited to defensives like IT and Pharma and all high beta stocks should be avoided as the current up move is now prone to equally sharp correction. Overall, high degree of caution is advised for today. 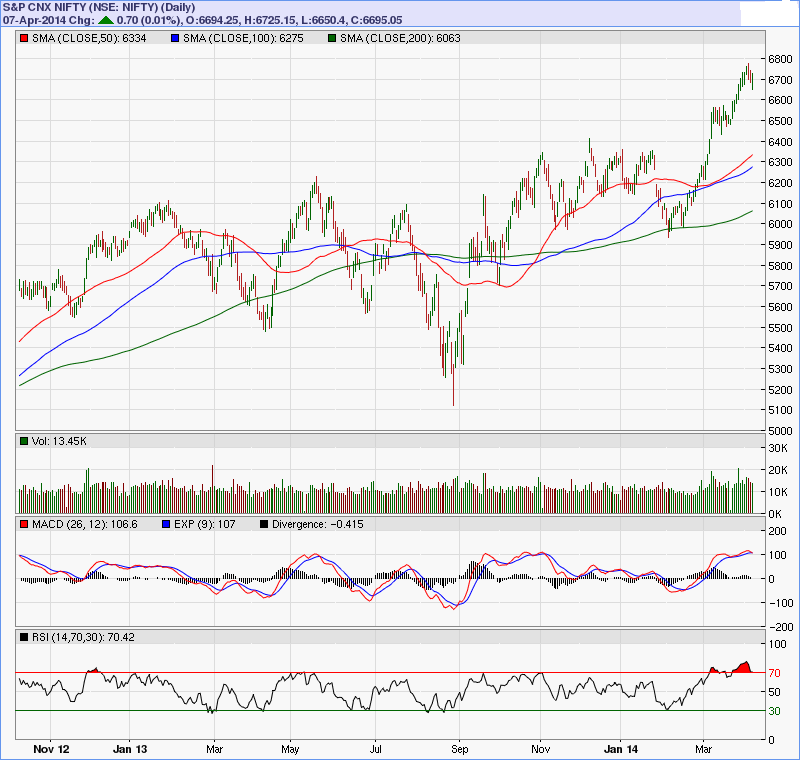 The Markets shall open today after a gap as yesterday was a trading holiday. The Markets are expected to open on a flat to mildly positive note and look for directions. Even if some amount of positive trading is seen, it is very much likely that the Markets continue to remain in the consolidation mode and trades in a range with some amount of volatility ingrained in it.

The lead indicators continue to remain overbought. The RSI—Relative Strength Index on the Daily Chart is 70.4193 and it is neutral as it shows no bullish or bearish divergences or any failure swings. However, it still continues to trade in the overbought territory. The Daily MACD has reported a negative crossover and it now trades below its signal line and it is bearish.

On the derivative front, the NIFTY April futures have added over 3.63 lakhs shares or 2.22% in Open Interest.  This signifies that some amount of shorts were covered form the lower levels on Monday and that has also resulted into addition of fresh longs. However, it needs to be seen if fresh profit taking begins.

Going by the pattern analysis, the Markets have now confirmed the levels of 6776.75 as its immediate top. The Markets will either see profit taking from these levels or at least consolidate with the levels of 6776 acting as the immediate top for the Markets. Going by the lead indicators and pattern analysis, it seem very much likely that this consolidation period would last bit longer before Markets see fresh up move.

Overall, today, we continue with our advice to remain light on exposure and make very sector and stock specific purchases. Shorts should still be avoided as the Markets may see bouts of short covering and the volatility would continue to remain ingrained in some sessions to come. While remaining light on positions cautious outlook is continued to be advised for today.


The Markets expectedly remained in the corrective mode on Friday as it opened negative, remained negative through the entire session and ended the day with modest losses. The Markets opened on a modestly negative note and expected the levels of 6776 continued to act as immediate top. After opening negative, the Markets traded in 20-odd points range until afternoon, after which it gradually kept losing ground. In the late afternoon trade, it touched the levels of 6685.15 to form the intraday low of the day. It hovered around those levels, never made any visible attempt to recover and finally ended the day at 6694.35, posting a loss of 41.75 points or 0.62% while forming a lower top and lower bottom on the Daily High Low Charts. 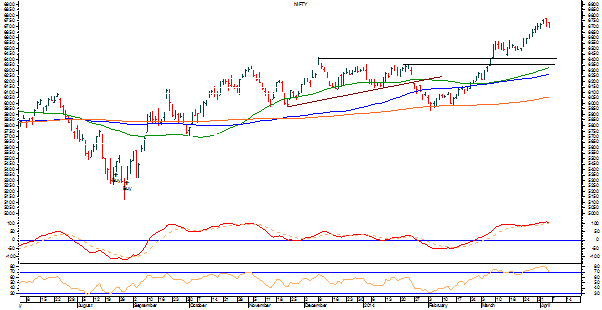 The Markets have visibly entered into corrective mode and today, it is expected to open on a flat and quiet note and look for directions. However, it is likely to remain under corrective mode and we can see some continuation of profit taking however at the same time, some sectoral out performance would also be seen.  We have a truncated week this time as tomorrow is a trading holiday.

The lead indicators continue to show the sign of some weariness in the Markets. The RSI—Relative Strength Index on the Daily Chart is 70.3672 and it still continues to remain in “overbought” territory. However, it is neutral as it shows no failure swings or any bullish or bearish divergences. The Daily MACD continues to trade above its signal line.

On the derivative front, the NIFTY April series have shed over 7.99 lakh shares or 4.66% in Open Interest. This is a very clear indication that there has been clear offloading of positions that has been seen in the Friday’s session.

Going by the pattern analysis, the levels of 6776 has now became a certain immediate top. The Markets would see an up move only after it moves past this level. However, for such up move to remain sustainable and healthy, it will have to either consolidate for some more time or show some profit taking from current levels.

All and all, the Markets would open flat and even if it trades positive in the initial session, some chances of profit taking from higher levels is certainly not ruled out. Sectoral out performance from the IT and Pharma stocks can be seen but the overall Markets is very much likely to remain in the corrective mode. It is important to make new purchases very selective and continue to protect profits at higher levels. While remaining light on the over all exposure levels, continuance of cautious outlook is advised for today.