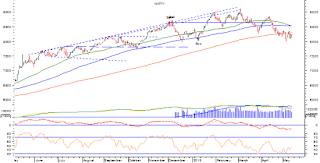 MARKET TREND FOR FRIDAY, MAY 15, 2015
Today as well, we continue to revolve the day’s analysis more or less on the similar lines. The Markets are expected to give a flat to modestly positive start but at the same time, it still continues to trade below its 200-DMA and this level is likely to pose resistance on its way up. However, the Markets are likely to attempt to continue with its recovery and trade with upward bias but still some intermittent bouts on the downside cannot be ruled out so long as it trades below its 200-DMA.

The RSI—Relative Strength Index on the Daily Chart is 44.2566 and it remains neutral showing no bullish or bearish divergence or any failure swing. The Daily MACD has reported a positive crossover and it now bullish trading above its signal line.

On the derivative front, the NIFTY May futures have added over 2.15 lakh shares or 1.55% in Open Interest. This shows some little amount of buying has emerged from lower levels. The NIFTY PCR stands at 0.95 as against 0.98.

Coming to pattern analysis, the Markets have attempted to find its bottom after posting lows on May 7th and is now attempting a pullback. However, while doing so, it still rules below its 200-DMA and therefore it is necessary for the Markets to move past this level. However, until this happens, as mentioned in our yesterday’s edition of Daily Market Trend Guide, the Markets will continue to witness volatile movements. Again, with the overall structure of the Chart supported by F&O data and somewhat improved external environment, there as strong chances that the Markets continue with its reversal in the coming sessions.

All and all, while continuing to remain constant on our analysis of previous couple of days, we continue to advise to refrain from aggressive positions. While strongly guarding any existing profits, small amount of fresh and selective purchases may be made. Cautious optimism is advised for the day. 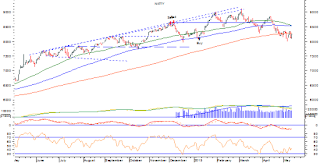 MARKET TREND FOR THURSDAY, MAY 14, 2015
Today’s analysis continues to remain on similar lines that of yesterday. The Markets may post a flat and quiet opening but it again becomes important to note that that the Markets still continues to trade below its 200-DMA and yesterday’s rise has come once again on back of short covering more than fresh buying. Given this fact, we may still continue to witness volatile movements in the Markets.

The RSI—Relative Strength Index on the Daily Chart is 44.6688 and it remains neutral showing no bullish or bearish divergence or any failure swing. The Daily MACD remains bearish trading below its signal line.

On the derivative front, the NIFTY May futures have once again shed over 2.27 lakh shares or 1.62% in Open Interest. This indicates short covering in the Markets.

All and all, we continue to reiterate our advice on refraining from creating any aggressive positions. Bottom hunting and selective buying may be done but in very small quantities as the Markets are not completely out of the woods. Until the Markets moves past its 200-DMA and sustains above that, we would continue to see some intermittent selling bouts and volatility will remain ingrained in the Markets. Continuance of cautious outlook is advised for the day. 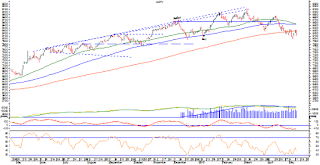 MARKET TREND FOR WEDNESDAY, MAY 13, 2015
Markets are likely to open today on a modestly positive note and thereby attempt to find some bottom and also attempt a relief rally. However, at this juncture, it becomes extremely important to note that the rallies that we saw on Friday and on Monday were fuelled by massive short covering and there was total absence of any delivery based buying. It would be necessary for the Markets to see some buying over and above short covering in order to confirm the bottom and attempt a reversal on the upside.
For today, the levels of 8180 and 8280 are immediate resistance for the Markets. Supports come in at 8065 and 7995 levels.
The RSI—Relative Strength Index on the Daily Chart is 39.6345 and it remains neutral as it shows no bullish or bearish divergence or any failure swing. The Daily MACD remains bearish while trading below its signal line.
On the derivative front, the NIFTY May futures have added over 4.34 lakh shares or 3.18% in Open Interest. This is the first time that the Markets have added OI while on decline. This indicates that the Markets have added good amount of shorts in the system. Also, the NIFTY premium has declined to its lowest levels in recent time. These are the faint signs that the Markets are attempting to find a bottom.
Coming to pattern analysis, the way the Markets are disregarding the important levels of 200-DMA, it is very clear that it is reacting to external factors and while doing so, it is attempting to find its bottom. Having said this, it still becomes important to note that while on its way up again in an attempt to recover, this level of 200-DMA is expected to remain a resistance for the Markets on the upside. Until it moves past this level, we will continue to see some pressure on the Markets in the immediate short term. Overall, the Markets have formed a broad range of 8000-8325 levels as of today.
Overall, as mentioned above, though some positive opening can be expected, the Markets are still not out of the woods at all. Apart from short covering which is likely, we desperately need to see fresh delivery based buying and this is what is required to support the Markets and make a successful reversal. It is advised to continue to refrain from any aggressive positions while maintaining cautious outlook on the Markets.

The Markets continued with its heavy bout of short covering yesterday as well and ended the day with decent gains. Today, though the Markets have closed a notch above its 200-DMA, expect the Markets to open on a flat note and look for directions. There are chances that the Markets may consolidate in a range bound manner while reacting to the CPI data coming in later. If some minor downsides are seen, it should not be surprising while the levels of 200-DMA is likely to act as support.

Overall, the Markets have seen upsides due to spate of short covering. For the Markets to go higher, it would need to see fresh buying taking place. However, until this happens, we cannot rule out the possibility of the Markets consolidating a bit. However, suspension of MAT notices will certainly aid the sentiments. Until the Markets confirms the reversal, continuance of caution with protection of profits at higher levels is advised.
Milan Vaishnav,
Consulting Technical Analyst,
Af. Member: Market Technicians Association (MTA), USA
Af. Member: Association of Technical Market Analysts, INDIA 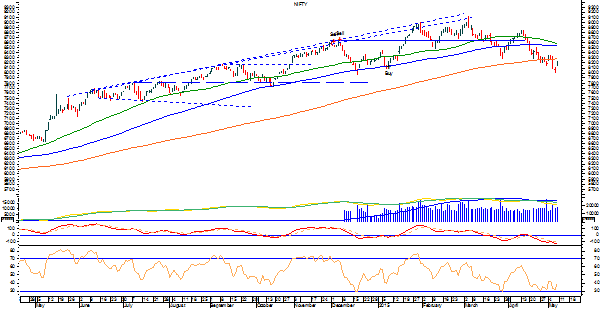 MARKET TREND FOR MONDAY, MAY 11, 2015
We are likely to once again see a decent and positive opening today while the Markets attempt to continue with its Friday’s pullback. However, it should be noted that what we are seeing is a sharp short covering led rally and therefore the Markets are not completely out of the woods until we see fresh buying coming in. Having said this, it would be also important to see the behaviour of the Markets vis-à-vis its 200-DMA levels in event of a continued rally.
For today, the levels of 8230 and 8280 will act as immediate resistance for the Markets. The supports will come in at 8140 and 8075 levels.
The RSI—Relative Strength Index on the Daily Chart is 40.0112 and it remains neutral while it shows no bullish or bearish divergence or any failure swing. The Daily MACD remains bearish trading below its signal line. On the Weekly Charts, the RSI stands at 44.3351 and this too continues to remain neutral showing no bullish or bearish divergences. The Weekly MACD is also bearish while trading below its signal line.
On the derivative front, the NIFTY May futures have went on shed over 12.61 lakh shares or 8.29% in Open Interest. This is very clear indication, as mentioned before, that the Friday’s rally has been fuelled absolutely by very heavy and sharp short covering.
Taking a cue from pattern analysis, the Markets have attempted to take support at Close levels on its 50-DMA on the Weekly Charts. The Markets trades above all of its moving averages on the Weekly Charts. On the Daily Charts, the Markets had breached its 200-DMA and are now attempting a pullback. On its way up, this very 200-DMA is likely to pose some resistance on the upside. It would be very important for the Markets to move past its 200-DMA and while doing so, it also witnesses some fresh buying rather than merely going up due to short covering.
All and all, we are set to see some possible positive opening again today. However, initially this positive movement would be more due to continued short covering. In order to successfully attempt a pullback, it would be imperative for the Markets to witness some fresh buying as well. We continue to reiterate out advice on making bargain purchases, but to a limited extent. Positive caution is advised for the day.