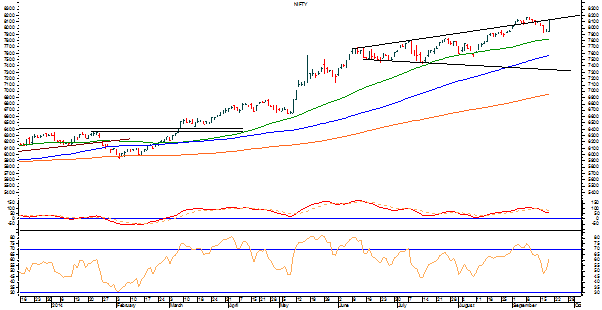 After a strong pullback, the Markets have left itself at a very critical juncture as evident from the Daily Charts. Tomorrow’s opening, and the behaviour of the Markets vis-à-vis the range of 8125-8150 would be crucial to see if the Markets attempt to breakout again or remain in consolidation mode. The opening is expected to be modestly positive but the overall trading trajectory of the Markets will remain very important and face an acid test.

The RSI—Relative Strength Index on the Daily Chart is 60.8258 and it is neutral as it shows no bullish or bearish divergence or failure swings. The Daily MACD still continues to remain bearish as it trades below its signal line.

On the derivative front, NIFTY September futures did see some fresh long positions as it added over 9.53 lakh shares or 7.54% in Open Interest.

Looking at the structure of the charts, as mentioned earlier, the Markets have still ended within the range seen on the Charts. Its opening and behaviour vis-à-vis the levels of 8120-8150 would be critically important. In order to breakout again, the Markets will have to trade above these levels. Failure to do so will bring the Markets once again in the consolidation zone.

Overall, with some initial positive movement expected, selective purchases can be made. Sectoral and stock specific out performance would also be seen. However, there are chances of some profit taking returning at higher levels and therefore, positions and profits should be protected at higher levels. Overall cautious optimism is advised.


The Markets had a volatile session and it moved in either direction before settling with modest gains after two days of losses. The Markets saw a strong opening, and proceeded to form its day’s low of 7990.65 but soon pared all of its gains subsequently to trade nearly flat.  Though quite good amount of volatility was witnessed in the trade it never really dipped into the negative. The Markets then spent the rest of the session in a capped and narrow range. It did never attempted to move upwards nor did it break down on the downside. After spending the session in this manner, the Markets finally ended the day at 7975.50, posting a modest gain of 42.60 points or 0.54% while forming a lower top and slightly higher bottom on the Daily Bar Charts.

Speaking purely on technical terms, the Markets have just halted its decline and there are chances that the weakness might continue to persist for some more time. Expect the Markets to open on a quiet note but at the same time, there are chances that it continues to bear negative bias and any rise may counter some more profit booking at higher levels. Possibilities of testing the level of 50-DMA cannot be ruled out.

The RSI—Relative Strength Index on the Daily Chart is 51.4293 and it remains neutral as it shows no bullish or bearish divergences or failure swings. The Daily MACD continues to remain bearish as it trades below its signal line. On the Candles,  A Bullish Harami has occurred. When such pattern is observed during a uptrend, as in case of NIFTY, this bullish harami pattern is considered bearish and signals potential continuance of the corrective activity.

On the derivative front, NIFTY September futures have shed yet another 2.82 lakh shares or 2.19% of Open Interest. This clearly indicates that profit taking and unwinding of positions have continued in the Markets.

Returning to pattern analysis, the Markets have formed a immediate top and have returned within the broadening formation. This implies bearish repercussions as such formations appear while formation of a major top. There are chances that the Markets may see pullbacks but these are likely to remain in overall downward bias of the Markets.

Overall, it is clear that any uptrend that the Markets will now see are likely to remain short lived and might be encountered with selling pressure from higher levels. Any purchases should be kept limited to non-index components and defensives. This should be done selectively and only if such sectoral indices are not overbought or have given sell signals. While maintaining much vigil, cautious approach should be continued.

The failure of the breakout from the rising trend upper trend line has been completely validated. Technically speaking, the Markets are likely to open on a weaker note and have bright chances to continue with its downward trajectory. If such trend persists, there are chances that the its goes on to test the 50-dma levels.

The RSI—Relative Strength Index on the Daily Chart is 47.8778. Though it does not show any bullish or bearish divergence, it has reached its lowest value in last 14-days which is bearish. The Daily MACD confirms it negative crossover and is bearish while it trades below its signal line.

On the derivative front, the NIFTY September further have continued to shed 5.29 lakh shares or 3.93% in Open Interest. This makes one thing very evident that the decline in Markets is direct result of unwinding of positions and pure selling. 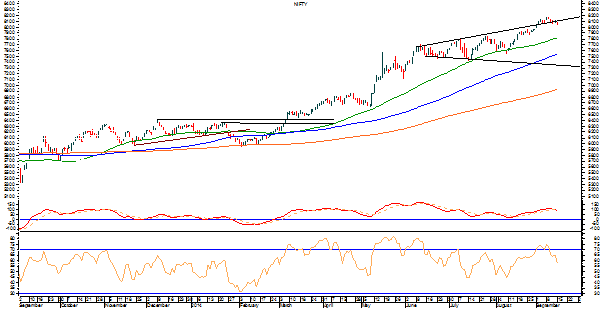 The RSI—Relative Strength Index on the Daily Chart is 57.9557 and it has reached its lowest value in last 14-days which is bearish. Further, the RSI has formed a fresh 14-period low whereas NIFTY has not yet and this is clear bearish divergence. The Daily MACD has reported a negative crossover as precisely predicted in our previous editions and it now trades below its signal line which is bearish indication.

On the derivative front, NIFTY September futures have went on to shed yet another 2.43 lakh shares or 1.78% in Open Interest. This signifies that that there has been continuance of unwinding of positions or profit taking and no fresh shorts have been created.

Going back to pattern analysis, the Markets have failed to confirm a breakout. Its movement past the rising trend line of the broad channel has proved to be a false signal or a whipsaw and with today’s close, it is back again in the broadening channel. As of now, the levels of 8180 has become a immediate top for the Markets and no runaway rise would occur until the Markets moves past this level.

Overall, the advisory remains more or less on similar lines like that of yesterday. We continue to reiterate to refrain from making major purchases but to keep them very much selective in stock specific and non-index components. Though sectoral out performance would continue, it is best advised to keep overall leverage under control. Cautious outlook is advised for the day.