MARKET TREND FOR FRIDAY, AUGUST 05, 2016
Markets traded precisely on expected lines yesterday as though it opened higher, it came off immediately from its opening highs to end day flat with minor gains. The levels of 8580-8600 acted as resistance yesterday. Today, we are likely to see a positive start to the Markets but the levels of 8600-8620 will continue to act as important pattern resistance to the Markets on Daily Charts. The ECB has kick started stimulus and this QE will result into risk assets continuing to remain in demand. 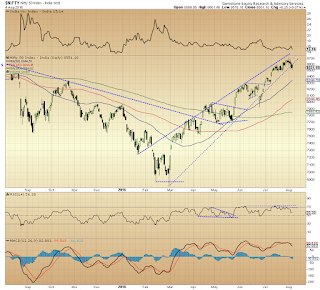 The RSI—Relative Strength Index on the Daily Chart is 56.3817 and it remains neutral as it shows no bullish or bearish divergence or any failure swing. The Daily MACD stays bearish as it trades above its signal line.

Coming to pattern analysis, as mentioned in our yesterday’s edition, the NIFTY has breached on the downside from the Channel that is drawn from the February lows. The level of 8580 was important to watch out for as it was the pattern support that the Markets breached on the downside. This level continued to act as resistance yesterday as well. Given the rising nature of the level, the levels of 8600-8620 will be critical to watch out for. Until the Markets move past these levels in the immediate short term, we will see them in corrective mode and they will continue to consolidate in a capped range.

Overall, with the levels of open interest addition witnessed in Puts yesterday, even a small up move is likely to trigger a serious short covering in the Markets. Over last 3-4 sessions, significant short positions have been added in the system. Given this reading, caution obviously gets elevated in the Markets. The Markets are likely to remain volatile and remain vulnerable to intermittent selling from higher levels until some critical levels are surpassed and the Markets get back into its upward momentum. Meanwhile which accepting 8680-8700 as its immediate top, cautious approach should be continued in the Markets.

MARKET TREND FOR THURSDAY, AUGUST 04, 2016
The Markets finally corrected and tested its important pattern supports levels while ending the day with losses. Today, we will see the Markets reacting to the GST bill getting passed and might see some initial reaction to it. Today, we can fairly expect to see a positive start to the Markets and we will see Markets trading with gains at least in the initial trade. However, while speaking purely on technical terms, it would be critical to see the Markets trading above important levels of 8580 so as to be back again in the trading channel. 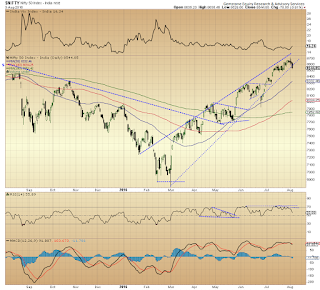 The RSI—Relative Strength Index on the Daily Chart is 55.8868 and it has reached its lowest value in last 14-days which is bearish. Furthermore, the RSI has set a fresh 14-day low while NIFTY has not yet and this is Bearish Divergence. The Daily MACD stays bearish as it trades below its signal line.

On the derivative front, the NIFTY August futures have added over 11.95 lakh shares or 5.24% in Open Interest. The NIFTY PCR stands further down at 0.87 as against 0.91.
Coming to pattern analysis, the Markets not only tested its lower pattern support of 8580-8560 but breached it as well yesterday. On its way up the level of 8580 is likely to act a short term resistance. On the other hand, it would be critically important for the Markets to bounce back and trade above 8580 levels so as to be back in the Channel. With each passing day, this level would increase given the rising nature of the channel. The lead indicators suggest the Markets remaining in consolidation / minor correction for some more time and the levels of 8675-8700 will remain sacrosanct as a immediate top for the Markets in the immediate short term.

Overall, we will see some sentimental bounce back in the Markets in the initial trade. The key would be to see if the Markets are able to capitalize on this expected positive opening and move beyond 8580 levels. Failure to do this will keep the Markets in corrective mode for some more time in the short term, even though, the overall downsides remain limited. It is important to note that volatility in the Markets will continue to remain ingrained and we will continue to see stock  specific activities dominating the session.

MARKET TREND FOR WEDNESDAY, AUGUST 03, 2016
The Markets held the immediate top levels of 8680-8715 intact as it continued to consolidate for the third day in a row while it ended its day yesterday with minor losses after coming off from its intraday highs. Today, we are once again expected to see a modestly negative start to the Markets. Today, GST bill will be tabled in the Upper House and its passing will have sentimental effect on the Markets though much of it has been priced in. On the lower side, the levels of 8550-8580 will be crucial to watch out for as they are one of the important pattern supports for the Markets. 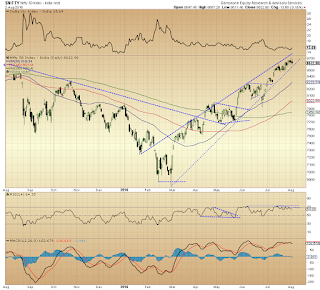 For today, the levels of 8680 and 8715 will act as immediate resistance levels for the Markets. The supports are expected to come in at 8580 and 8550 levels.

The RSI—Relative Strength Index on the Daily Chart is 64.3547 and it remains neutral as it shows no bullish or bearish divergence or any failure swings. The Daily MACD stands bearish as it trades below its signal line.

On the derivative front, the NIFTY August futures have further gone on to add over 2.85 lakh shares or 1.27% in Open Interest. The NIFTY PCR stands further down at 0.91 as against 0.94 yesterday.

Coming to pattern analysis, as mentioned often in our previous editions, the Markets are currently well within the rising channel drawn from the lows it made in February. Having said this, though until now the Markets have been tracking the upper end of the Channel, the channel is narrowing and therefore a sharp movement on either side cannot be ruled out. While the Markets consolidate, the pattern support levels formed by the lower band of the channel fall at 8550-8580 range and any breach below these levels will see some more temporary weakness creeping in to the Markets. However, having said this, it also becomes important to note that the overall inherent structure of the Markets continues to remain buoyant and remains resilient to any major external events.

Overall, though we can expect a lower opening today, it is likely to get bought into at lower levels. Furthermore, even if we see some corrective activities in the Markets, the overall downsides are likely to remain limited. However, given the inherent technical structure of the Markets we will see some good amount of volatility remaining ingrained in the Markets and the Markets will continue to remain vulnerable to intermittent bouts at higher levels. While continuing with our view given yesterday, we reiterate cautious stand on the Markets.

MARKET TREND FOR TUESDAY, AUGUST 02, 2016
The Markets traded mostly on analyzed lines yesterday as it expectedly witnessed a intraday selling bout as it came off over 100-odd points from the high point of the day to end on absolutely flat note. Today, we can fairly expect such consolidation to continue in the Markets. We can expect the Markets to start on a flat not and look for direction with the levels of 8590-8570 acting as pattern supports. The intraday trajectory that the Markets form would be critical to decide the trend for the day. 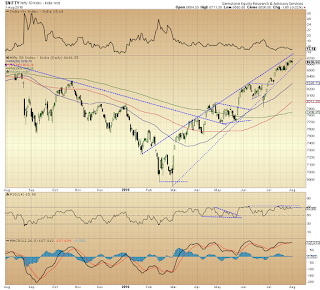 The RSI—Relative Strength Index on the Daily Chart is 65.9781 and it remains neutral as it shows no bullish or bearish divergence or any failure swings. The Daily MACD has turned bearish as it has reported a negative crossover and now trades below its signal line.

On the derivative front, the NIFTY August futures have added over 3.49 lakh shares or 1.58% in Open Interest. Some fresh shorts are being witnessed and the NIFTY PCR stands unchanged at 0.94 today.

Overall all, as of now, the primary trend of the Markets remain intact and any corrective activity is expected to remain restricted to intraday selling bouts like one that we witnessed yesterday or very limited downsides amidst range bound movements. However, also as mentioned in yesterday’s edition, the caution levels in the Markets remain at elevated levels and all existing profits should be guarded vigilantly at higher levels. Continuance of cautious outlook is advised on the Markets.

MARKET TREND FOR MONDAY, AUGUST 01, 2016
Markets took a breather on Friday from the up move that it witnessed over previous week and ended the day with modest losses while it consolidated. However, the Markets continued to display typically liquidity-fueled strength and resilience and today, it is  once again expected to open on a higher note. The Markets may post fresh 52-week highs today but at the same time, caution stands at elevated levels. 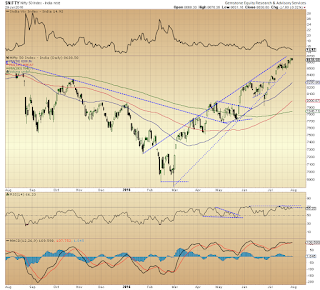 For today, the levels of 8670 and 8705 will act as immediate resistance levels while the supports would come again lower at 8570 and 8535 levels.

The RSI—Relative Strength Index on the Daily Chart is 66.1996 and it is neutral as it shows no bullish or bearish divergence or any failure swings. The Daily MACD continue to remain bullish as it trades above its signal line.

On the derivative front, the NIFTY August futures have added over3.23 lakh shares or 1.48% in Open Interest.

Coming to pattern analysis, the Markets have continued to remain in the upward rising channel drawn from February lows. As mentioned often, the Markets have successfully managed to remain in this upward rising channel. It has been displaying good amount of resilience and strength as after each up move, the Markets are showing a range bound consolidation and the corrections have remain limited in the form of intermittent selling bouts and flat endings at Close levels. However, it is also important to note that it has been tracking the upper line of the channel and as mentioned often in our previous editions, it is also continuing to display mild signs of fatigue at higher levels.

Overall, though the Markets are expected to start positive, the caution levels too stand at elevated levels. The Markets will continue display strength and will also continue to see stock specific out performance but continue to reiterate our view to use upsides more for protecting profits at higher levels and keeping fresh purchases highly selective and extremely stock specific. Overall, positive but cautious outlook is advised for the day.