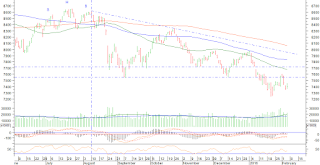 MARKET TREND FOR Friday, February 5, 2016
The Markets are likely to see a flat opening and is likely to trade in a capped range in the initial trade today. The Markets have been tentative and are likely to remain so in the immediate short term as the levels of 7540 have acted as a fierce resistance post pullback and will continue to act as resistance as well in the immediate short term. The intraday trajectory that the Markets form would be critical to watch out for post flat opening. Though the Markets continues to make attempt form a bottom, it continues to remain vulnerable to sell-offs at higher level as well.

The RSI—Relative Strength Index on the Daily Chart is 41.9102 and it is neutral as it shows no bullish or bearish divergence or any failure swings. The Daily MACD remains bullish as it trades above its signal line.

On the derivative front, the NIFTY February futures have shed over 5.53 lakh shares or 2.85% in Open Interest. The reduction in Open Interest indicates that some amount of unwinding was seen from higher levels yesterday.

Coming to pattern analysis, the structure of the Markets remains similar to what we have explained in our recent past editions. The Markets forms a triple bottom and a descending triangle and it breached the critical supports of 7540 and made recent lows of 7250 in recent past. From there, the Markets attempted to form a bottom, pulled back but the levels of 7540 continued to pose a fierce resistance to the pullback. Though the  Markets have retraced once again some 200-odd points, it is yet to show any definite signs of any confirmation of bottom formation.  At the same time, with the Markets trading below 7540, this level will continue to act as important resistance to the Markets on its way up. Until the Markets moves past this level and beyond, it will continue to remain vulnerable to intermittent sell-offs from higher levels.

All and all, the Markets have shown modest gains yesterday but it is still not completely out of the woods and the structure continues to have a bearish undertone. No sustainable run-away up move shall occur in the Markets until Markets moves past certain critical levels. Until this happens, it may continue to oscillate in a broad trading range and would also remain vulnerable to sell-offs at higher levels. Continuance of cautious outlook is advised for today. 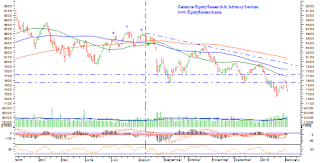 MARKET TREND FOR THURSDAY, FEBRUARY 04, 2016
After the Markets have shaved off over 200-odd points in last three sessions, we are likely to see some respite from the weakness that we have been seeing recently. We can expect the Markets to open on a fairly stable note. However, there are two things that we need to take note of. One, it would be critically important for the Markets to sustain expected opening gains and; two, the levels of 7540 will continue to pose major resistance in the immediate short term.

The RSI—Relative Strength Index on the Daily Chart is 38.9922 and it remains neutral as it shows no bullish or bearish divergence or any failure swings. The Daily MACD continues to remain bullish as it trades above its signal line.

On the derivative front, the NIFTY February futures have added over 1.29 lakh shares or 0.67% in Open Interest. This indicates creation of some minor shorts in the system.
If we take a look at pattern analysis, we have been mentioning in our previous editions that what we have seen is a mere technical pullback and there have been no signs of “confirmation” of bottom. This keeps us vulnerable to selling bouts from higher levels. This happened precisely as the Markets resisted near 7540 levels and came off over 200-odd points from there. As of now, though the Markets are expected to take support around these levels and it is not expected to make fresh lows but until a definite bottom is formed and confirmed, the Markets will continue to remain vulnerable to selling bouts from higher levels and the levels of 7540 will continue to act as immediate resistance for the Markets.

Overall, though the Markets are expected to see a decently positive opening, it would be important to see if it sustains this and is able to capitalize on it. In any case, with the levels of 7540 acting as important resistance levels, the Markets are likely to oscillate in a broad range and will see some amount of volatility remaining ingrained in the Markets. While avoiding over-exposure in the Markets cautious outlook should be continued for today.

MARKET TREND FOR WEDNESDAY, FEBRUARY 03, 2016
Today, in line with the prevailing global weakness, we are likely to see a negative opening in the Markets. However, looking at the overall technical structure of the Charts and reading of lead indicators, we are likely to see some resilience from the Markets are lower levels and there are less chances that the Markets makes fresh lows. However, at the same time, it also becomes important to note that the levels of 7540 has once again proved to be a resistance and this level will remain a key level to watch out for.

The RSI—Relative Strength Index on the Daily Chart is 43.4998 and it remains neutral as it shows no bullish or bearish divergence or failure swings. The Daily MACD continues to remain bullish as it trades above its signal line.

On the derivative front, the NIFTY February futures have shed over 7.31 lakh shares or 3.64% in Open Interest. The NIFTY PCR stands at 0.81 as against 0.87 yesterday.

Coming to pattern analysis, we had mentioned often in our previous editions that the Markets have attempted to form a bottom around 7250 levels but have not confirmed it as yet. We had also mentioned that in absence of any confirmation of bottom, what we were seeing are just pullbacks and therefore we continue to remain vulnerable to intermittent selloffs. While this precisely happening, the importance of levels of 7540 remains sacrosanct. This was the important support that the Markets broke on the downside and this is the level which the Markets will continue to resist in the immediate short term.

As mentioned in the beginning, though the level of 7540 continues to remain a key level to watch out for, the Markets are also likely to show resistance to major downsides. Though the Markets may remain weak in the immediate short term remaining affected by global weakness, bouts of short covering from lower levels cannot be ruled out. While expecting resilience by the Markets at lower levels, cautious outlook is advised for the day. 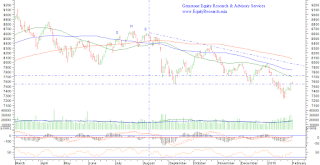 MARKET TREND FOR TUESDAY, February 2, 2016
The Markets have traded yesterday on analysed lines as it consolidated while the levels of 7540 act as support. Today, we can expect a flat to mildly positive start to the Markets. The analysis continues to remain on similar lines as the Markets are expected to consolidate with upward bias and the levels of 7540 will continue to act as support and it would be the important levels to watch out for. Today, RBI is coming up with Credit Policy later in the day and the Markets would also react to that.

The RSI—Relative Strength Index on the Daily Chart is 49.1501 and it remains neutral as it shows no bullish or bearish divergence or any failure swings. Daily MACD remains bullish as it trades above its signal line.

On the derivative front, the NIFTY February futures have added over 6.90 lakh shares or 3.56% in Open Interest. This is good indication that the Markets are trying to build some base for continuation of a pullback.

While having a look at pattern analysis, the Markets have managed to move above the critical levels of 7540 and have managed to stay above that. If it is to consolidate at these levels, it will have to keep its head above 7540 levels to avoid any short term weakness again. However, in event of the Markets significantly slipping below the levels of 7540 again, it may lead to weakness persisting for some more time. Therefore, the levels of 7540 continue to remain important levels to watch out for and in ideal condition, the Markets should consolidate keeping that level as bottom support and move on from there.

Overall, so far as RBI Credit Policy is concerned, the RBI is expected to keep the key rates unchanged and this remains discounted by the Markets. The Markets are likely to remain capped and trade in a range in the initial trade and later react to the RBI news flow, however, any hike, will remain a positive surprise for the Markets. Keeping in line with recent analysis, we continue to reiterate to continue to keep making selective purchases while guarding profits at higher levels.