MARKET TREND FOR FRIDAY, JULY 01, 2016
The Markets continued to recover and had a healthy expiry session yesterday as it ended yet another day with gains. Today, we are likely to see the Markets taking a breather from the gaining streak. We can fairly expect the Markets to open on a flat note and look for directions. The levels of 8300 would be key levels to watch out for and it would be interesting to see if the Markets attempt a break out and if they do, it would be further interesting to see if the higher levels are sustained. 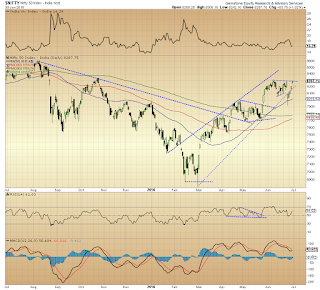 The RSI—Relative Strength Index on the Daily Chart is 61.0283 and it does not show any failure swing. However, the NIFTY has formed a fresh 14-period high whereas the RSI has not and this is Bearish Divergence. The Daily MACD stays bearish as it continues to trade below its signal line.

While having a look at pattern analysis, we had mentioned on the day Brexit voted to exit Europe that the Markets will show a sharp knee jerk reaction to this but eventually techincals would take over and we will see the Markets recovering gradually. Over last 5 days, this is what precisely has happened. The Markets anyway had pattern resistance before this even at 8294-8300 levels and today the Markets are again back to these levels. So, individually speaking, with all the Brexit volatility recovered and dealt with, the Markets faces a resistance around 8295-8310 levels. It would be interesting to see the behavior of the Markets vis-à-vis this level and some amount of consolidation at higher levels cannot be ruled out.

All and all, it would be healthy if the Markets see some amount of consolidation at higher levels as the Markets have seen rise of nearly 375-odd points from the Friday’s intraday lows. Any consolidation if we see, would be very healthy for the Markets in the long term. The lead indicators suggest some weariness in the Markets at higher levels and it would be prudent if we use all up moves from here on to book and protect profits in existing positions. Fresh position should be kept limited and stock specific. Overall, cautious outlook is advised for the day.

MARKET TREND FOR THURSDAY, JUNE 30, 2016
The Markets have staged a smart up move on back of positive global cues and have managed to trade back into the channel moving past its pattern resistance and in the process, has recovered nearly 75% of its Friday’s losses. Today as well, tracking positive global cues and favorable technicals, the Markets are likely to see a decently positive start and move towards its immediate top. It would be extremely important to see if the Markets sustain the expected positive opening and capitalize on that. 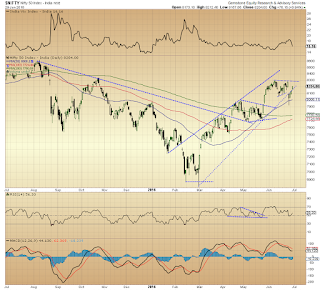 The RSI—Relative Strength Index on the Daily Chart is 56.2962 and it remains neutral as it shows no bullish or bearish divergence or any failure swing. The Daily MACD stays bearish as it continues to trade below its signal line.

While having a look at pattern analysis, we now need to take a individual look our Charts. The Brexit effect is left behind and the Markets have recovered over 70% of its losses.
Having said this, until yesterday, the Markets were resisting to the trend line as it had fallen out of the rising channel drawn from February lows. Yesterday, the Markets have managed to get inside that channel once again. With today’s expected opening, the Markets will move towards testing its immediate highs of 8280-8295 range which was formed pre-Brexit date. This range, individually speaking, continues to remain an immediate top and resistance for the Markets. It would not be a surprise if we see some mild profit taking bouts at higher levels.

Also, given the expiry of the current series today, we will see the Markets remaining dominated with rollover centric activities. Even if the undercurrent continues to remain intact, some minor profit taking bouts at higher levels cannot be ruled out. However, it would once again be a healthy consolidation if it happens at higher levels, before the Markets attempts to move past its immediate top. Overall, cautious optimism is advised for the day.

MARKET TREND FOR WEDNESDAY, JUNE 29, 2016
The Markets ended the day with modest gains but it continued to track the upper rising trend line as resistance at the day’s high. Today, we enter the penultimate day of the expiry of the current series and therefore we can fairly expect the session to remain dominated with rollover centric activities. Today, the Markets are expected to open with modest gains but in the same breath, it is also expected to track its pattern resistance and also remain bit volatile as well. 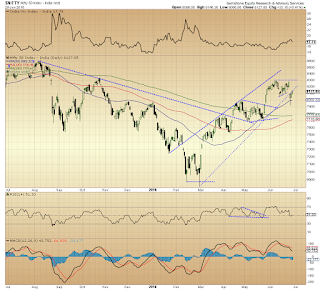 The RSI—Relative Strength Index on the Daily Chart is 51.3099 and this remains neutral as it shows no bullish or bearish divergence or any failure swings. The Daily MACD still remains bearish as it trades below its signal line.

Coming once again to pattern analysis, as mentioned in our yesterday’s edition, the Markets have breach on the lower side of the rising channel drawn from February lows. Now with it being out of the Channel on the lower side, each subsequent up moves will be resisted by the upward rising trend line. The Markets may continue to see moderate up movers as this pattern resistance line too keeps rising every day. However, it is very much evident from the overall structure of the Charts that the levels of 8250-8300 has now become an immediate top for the Markets are is not likely to be breach easily in the near term. Also, F&O data strongly suggests that this level has formidable creation at these strike prices which is also likely to pose a statistical resistance to the Markets.

Overall, we continue to keep our recommendation on similar lines. We reiterate to avoid shorts and keep purchases limited to specific sectors which have dependence on local economy and also use all up moves to vigilantly protect profits. Some sharp profit taking bouts from higher levels cannot be ruled out. Overall, while keep exposures limited preservation of cash is advised.

MARKET TREND FOR TUESDAY, JUNE 28, 2016
The Markets continued to trade in a capped range, much on expected lines yesterday and ended the day with minor gains. Today as well, we continue to keep our analysis on similar lines. The Markets are expected to open on a modestly negative to flat note and look for directions. It is expected to remain volatile but in a capped range and since it has broken out of the channel; it is likely to continue to resisting to the rising trend line drawn from the lows of February. 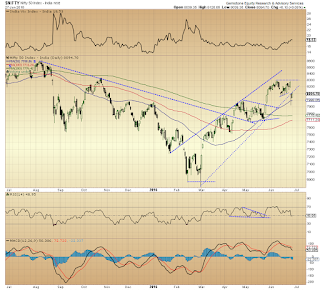 The RSI—Relative Strength Index on the Daily Chart is 48.9465 and it remains neutral as it shows no bullish or bearish divergence or any failure swings. The Daily MACD stays bearish as it trades below its signal line.

On the derivative front, rollovers continued as the NIFTY June futures shed over 13.17 lakh shares or 9.81% in Open Interest. The July futures added over 22.87 lakh shares in OI. There was net OI addition and the NIFTY PCR stood at 1.04.

Coming to pattern analysis, as we mentioned in our yesterday’s edition, the Markets have breached the channel on the downside and therefore, the trend line drawn from the lows of February which was acting as pattern support is now likely to act as resistance. However, given the rising nature of the trend line, this potential resistance levels keeps rising every day. Further to this, it still remains important to note that the Markets continue to trade above all of its averages and therefore it remains structurally intact. There is no structural damage as yet and the lows of Friday, i.e. 7927 continue to remain sacrosanct as of now. Any breach below this level, which is not likely, will bring further weakness in the Markets.

Overall, though the Markets have not shown any structural breach, it is very much likely that it continues to see ranged volatility. This is more important when we have expiry lined up this week. We continue to reiterate our view of preserving more cash. With every dip, if any, limited purchases may be made. However, this may be kept very selective and sector specific. Overall, cautious optimism is advised for the day.

MARKET TREND FOR MONDAY, JUNE 27, 2016
The Markets witnessed tremendous amount of volatility on Friday following Brexit and swung nearly 400-odd points and ended with losses even after recovering some 150-odd points from the lows of the day. Today as well, we are likely to see a negative opening once again and the Markets will continue to adjust itself with this very important global development. As mentioned in our previous edition, the Markets did go on to test the 50-DMA and the Friday’s low has now become a reference point for the immediate short term. 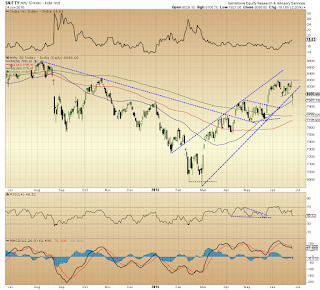 The RSI—Relative Strength Index on the Daily Chart is 48.5207 and it has reached its lowest level in last 14-days which is bearish. It does not show any bearish or bullish divergence. The
Daily MACD is bearish as it continues to trade below its signal line.
On the derivative front, the NIFTY June futures have shed over 24.52 lakh shares or 15.43% in Open Interest.

Overall, lower opening is likely in the Markets once again but in the same breath, the Markets will also attempt to stabilize itself.  While expecting the levels of 50-DMA and the Friday’s low as immediate support, the Markets may attempt to form base and these levels will be important to watch out for as any breach below this will induce further weakness in the Markets. Going ahead, liquidity should be preserved while adopting a cautious outlook on the Markets.