MARKET TREND FOR FRIDAY, AUGUST 19, 2016
Though the Markets ended the day yesterday with modest gains, the levels of 8700-8725 continued to remain as intermediate top for the Markets. Today as well, the Markets are likely to see a flat to mildly negative opening and therefore this keeps our analysis for today on similar lines that of yesterday. Though the Markets may open flat to mildly negative the overall movement is likely to remain range bound and the mentioned levels will continue to act as resistance. 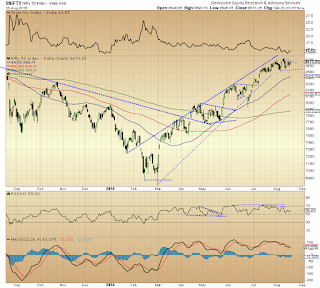 The RSI—Relative Strength Index on the Daily Chart is  59.1958 and this remains neutral as it shows no bullish or bearish divergence or any failure swings. The Daily MACD is bearish as it trades below its signal line.

On the derivative front, the NIFTY August futures have shed over 7.34 lakh shares or 2.99% in Open Interest. This shows some amount of short covering that have taken place in yesterday’s session.

Coming to pattern analysis, after falling out of the upward rising channel drawn from February lows, the Markets have continued to keep the levels 8700-8725 sacrosanct as its immediate resistance. The Markets have not moved past these levels and very much as analyzed in previous editions, it has shown limited downsides as well. Much of the corrective activity has come in the form of range bound sideways movement and currently the Markets continue to trade within a small congestion zone while the mentioned levels continue to act as immediate resistance levels for the Markets.

Overall, we will not see any runaway rise until the Markets moves past the levels of 8700-8725. Until this happens, we will see the Markets remaining in corrective mode and this will result into range bound volatile movements, though the downsides are likely to remain limited. We continue to reiterate our view to continue to utilize intermittent downsides to make selective purchases while vigilantly protecting profits at higher levels.

MARKET TREND FOR THURSDAY, AUGUST 18, 2016
Range bound consolidation continued in the Markets as it continued to remain in sideways trajectory on Daily Charts while ending the day with modest losses. Today as well, the Markets are expected to open on a flat to modestly positive note and look for directions and this keeps our analysis on similar lines that of yesterday. We will continue to see the Markets trading in a well defined range while the levels of 8700-8725 will continue to act as immediate top for the Markets for the near term. 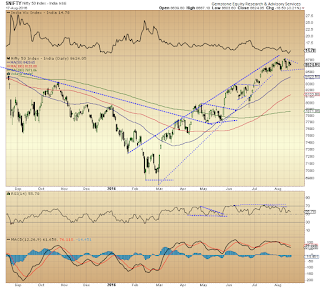 The RSI—Relative Strength Index on the Daily Chart is 55.7773 and this remains neutral as it shows no bullish or bearish divergence or any failure swings. The Daily MACD stays bearish as it trades below its signal line.

On the derivatives front, the NIFTY August futures have shed over 2.56 lakh shares or 1.03% in Open Interest. This signifies some creation of fresh short positions in the Markets again.

While having a look at pattern analysis, as mentioned often in our previous editions, though the Markets have fallen out of the rising channel that is drawn from the February lows, the corrective activity has been in form of more of sideways range bound movements than any major downsides. Keeping in line with this fresh pattern, we can fairly expect the Markets to continue to exhibit limited downsides while at the same time, the levels of 8700-8725 will continue to act as important resistance and intermediate top for the Markets. No sustainable up move shall occur until the Markets move past this level.

Overall, any corrective activity, especially in the form of a sideways movement is healthy for the Markets in the long term. While the overall trend remaining intact and with the Markets continuing to exhibit inherent buoyancy, we continue to reiterate the approach of using any intermittent downsides to make selective purchases. Until the levels of 8700-8725 are breached on the upside, all profits will required to be protected vigilantly though major shorts should be avoided. More preservation of cash to make selective purchases during dips should be done maintaining a positive caution in the Markets.

MARKET TREND FOR WEDNESDAY, AUGUST 17, 2016
The Markets continued to remain in corrective mode yesterday and today as well, we continue to keep our analysis on absolutely similar lines. We can expect the Markets to see a modestly negative opening but at the same time, the Markets are expected to continue with its corrective activities as well. As mentioned yesterday, though the corrective actions will not see major downsides but the levels of 8700-8725 has now become a intermediate top for the Markets. 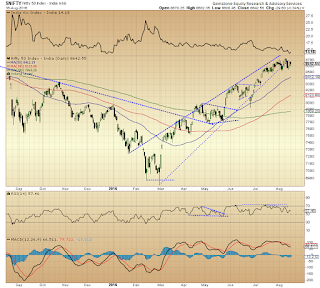 The RSI—Relative Strength Index on the Daily Chart is 57.4580 and it remains neutral as it shows no bullish or bearish divergence or any failure swings. The Daily MACD stays bearish as it trades below its signal line.

On the derivatives front, the NIFTY August futures have shed over 2.03 lakh shares or 0.83% in Open Interest. The NIFTY PCR stands at 1.0 as against 1.03.

While having a look at pattern analysis, as mentioned often the Markets showed clear signs of fatigue over past couple of days while the upward rising channel that the Markets was trading in had started getting narrow. The Markets had been trading within this channel that is drawn from the lows that the Markets made in February. The Markets have shown a downward breach from this and currently this has established the levels of 8700-8725 as its immediate top. We will not see any significant runaway up moves coming in and if at all that happens, the sustainability of such up moves will remain questionable. Sound up moves will occur only after the Markets moves past 8725 comprehensively. On the downside, the levels of 8500 remain an important level to watch and a major support as well.

Overall, we continue to reiterate a cautious outlook on the Markets in the immediate short term. Though the inherent long term trend remains explicitly bullish the Markets will show intermittent corrective tendencies though the downsides remain limited. Volatility too will remain ingrained in the Markets. While avoiding any major shorts, any downsides should be continued to be utilized to make selective purchases as stock specific out-performance will continue.

MARKET TREND FOR TUESDAY, AUGUST 16, 2016
The markets will reopen today after a holiday following Independence Day yesterday. Today, we can fairly expect the Markets to open on a flat to mildly positive note and look for directions. Speaking purely on technical grounds, the Markets are expected to open stable and positive and continue with the up move at least in the initial trade. However, the Markets are under consolidation and the levels of 8700-8725 zones will continue to pose major and important resistance to the Markets. 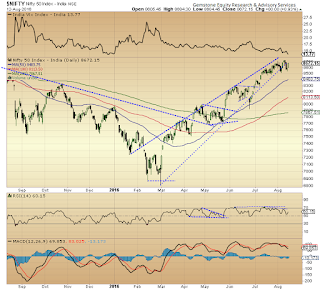 On the derivatives front, the NIFTY August futures have shed over 8.75 lakh shares or 3.43% in Open Interest. This makes quite evident that the rise that we saw on Friday was more on account of short covering.

Coming to pattern analysis, the Markets have broken out of the rising channel formation, a channel that is drawn from the February lows. As mentioned often in our previous editions, this channel was getting narrower and a sharp movement on either side was not ruled out.
Currently with the channel getting narrower, the Markets showed a downward breach, only to move up again. However, it still continues to trade below and outside the said channel. Further, while having a look at the Weekly Charts, the pattern clearly suggests potential halting of the uptrend. Though this remains a high possibility, this always requires a confirmation on the next weekly bar.

Overall, given the above facts, it is very much evident that the Markets are very less likely to give a runaway rise on the upside. In case of such runaway rise, the sustainability of such rise would be questionable. The Markets are likely to continue to remain in corrective mode. However, given the inherent buoyancy of the Markets, such corrective actions will be characterized with limited downsides and more of range bound sideways movements. The stocks / sectors that underperformed over previous two weeks are likely to lead. Overall, we continue to reiterate to use dips to make selective purchases at lower levels.