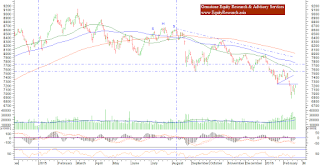 MARKET TREND FOR TODAY FRIDAY, FEBRUARY 19, 2016
Today is the likely day for consolidation for the Markets. While keeping the analysis on the same lines that of yesterday, the Markets will continue to see themselves resisting at 7200-7240 zone. Today, the Markets are likely to open on a quiet note and look for directions. The intraday trajectory that the Markets forms post opening would be crucial to watch out for and the behavior vis-à-vis the levels of 7200-7240 will be important to watch out for.

The RSI—Relative Strength Index on the Daily Charts is 43.1142 and it remains neutral as it shows no bullish or bearish divergence or any failure swings.  The Daily MACD stays bearish as it trades below its signal line. However, it is attempting to move towards possible positive crossover in coming days if the Markets consolidate.

On the derivative front, the NIFTY February futures have added further over 5.24 lakh shares or 2.43% in Open Interest. This signifies addition of fresh longs into the system.

Going by the pattern analysis, the Markets have expectedly resisted to the 7200-7240 zone. These are the levels that the Markets breached on the downside and therefore the same are acting as resistance on its way up. It is important to note that the Markets are unlikely to breach its previous lows even if it corrects a bit. Though the Markets may correct from higher levels and tend to consolidate in a broad range, the previous lows are not likely to be tested unless the Union Budget remains problematic. The reason being – in the previous week and a half when the Markets are oscillating in a broad range, there has been evident increase in volumes and this is a sign of possible accumulation. However, this remains purely indicative at this juncture.

Overall, the Markets may remain little volatile and may oscillate in a given broad range. The Markets may still remain vulnerable to selling pressure around 7200-7240 zone and therefore we continue to reiterate our view of keeping the overall exposure moderate and remaining vigilant at higher levels. The cautious view is reiterated given the fact that the Markets are yet to move past the 7200-7240 zones. 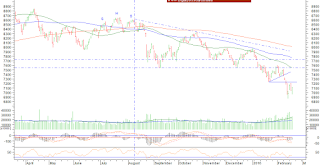 MARKET TREND FOR THURSDAY, FEBRUARY 18, 2016
Today’s analysis continues to remain more or less on similar lines that of yesterday. The markets are likely to see a modestly positive opening but once again, the levels of 7200-7240 will continue to act as resistance zone for the Markets. With no signs of confirming bottoms so far, the behavior of the Markets vis-à-vis these levels would be critical to watch out for. Though, some amount of technical pullback is expected, the Markets continue to remain vulnerable to selling pressures at higher levels.

The RSI—Relative Strength Index on the Daily Chart is 38.7889 and it remains neutral as it shows no bullish or bearish divergence. The Daily MACD stands bearish as it trades below its signal line.

On the derivative front, the NIFTY February futures have shed 84,150 shares or nominal 0.40% in Open Interest. Going by these figures, we see that still quite good amount of shorts still exist in the system. The NIFTY PCR stands at 0.80 as against 0.78.

While having a look at pattern analysis, we had mentioned yesterday that though the Markets are not expected to breach its previous bottom, it will continue to oscillate in a broad range. Keeping in line with this analysis, the Markets oscillated nearly 100+ points intraday. Today as well, if we expected the Markets to show uptick in the initial trade, it would be continuation of pullback. It becomes important to note that these are technical pullbacks as of now and the Markets have not yet shown any signs of confirmation of bottom so far. The levels of 7200-7240 will remain critical to watch out for. With no signs of bottom formation as yet, the Markets may continue to advance towards these levels but at the same time will remain vulnerable to sell-offs at higher levels as well.

Overall, Markets may open modestly positive and are likely to continue to edge higher. However, with the Markets ruling still below its critical levels, we continue to reiterate our view of cautious outlook on the Markets. Profits, if any, should be vigilantly protected at higher levels and rallies should be used to protect profits until the Markets moves past its critical levels. Continuation of cautious outlook is advised for today. 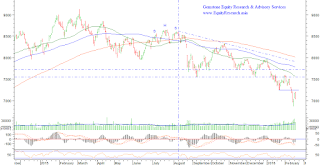 MARKET TREND FOR WEDNESDAY, FEBRUARY 17, 2016
The Markets have decoupled since yesterday with the Global Markets and have shown downsides despite global stability. However, today, we can once again expect a stable start to the Markets. The Markets are likely to see a modestly decent opening but the levels of 7240 are likely to continue to remain a immediate resistance for the Markets in the immediate short term. At the same time, the Markets are also less likely to retest or breach its low of 6869.

The RSI—Relative Strength Index on the Daily Chart is 35.4977 and it remains neutral as it shows no bullish or bearish divergence or failure swings. The Daily MACD stays bearish as it trades below its signal line.

On the derivative front, the NIFTY February futures have once again added over 7.62 lakh shares or 3.73% in Open Interest. This shows addition of fresh shorts into the system. The NIFTY PCR stands at 0.78 as against 0.80.

While having a look at pattern analysis, the Markets resisted and declined from 7200-7240 range. These levels are likely to act as resistance as it was the last immediate support that it breached on the downside.  The Markets are expected to oscillate in a  broad range with the levels of 7200-7240 acting as immediate resistance. The lower range can be little broad as well with the levels of 6870. The previous low of the Markets are not likely to be breached. For the Markets to form and establish 6869-70 as immediate bottom, it will have to move past 7240 and trade above those levels. Until the Markets move past these levels, it will not be forming a confirmed bottom and would continue to remain vulnerable as ever to selloffs from higher levels.

All and all, though we can expect a modestly positive start to the Markets, it would be important to take note of the fact that the Markets are not yet out of the woods. It currently trades in what is known “trading range” with either no directional bias or with mildly bearish undertone. This structure of the Markets will remain until it moves past 7240. It is advised to continue to refrain from excessive position and adopt cautious outlook on the Markets. 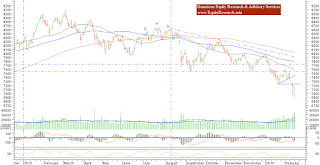 MARKET TREND FOR TUESDAY, FEBRUARY 16, 2016
Markets witnessed a very sharp technical pullback yesterday. Today as well, we can expect a fairly positive start to the Markets and they are likely to continue with its yesterday’s pullback. Having said this, we again refer to our yesterday’s edition wherein we had mentioned that the logical target and resistance to the Markets may occur at 7240 levels.
Today’s opening is likely to see the Markets trading around these levels and it would be critically important to see the behavior vis-à-vis these levels.

The RSI—Relative Strength Index on the Daily Chart is 39.2295 and it remains neutral as it shows no bullish or bearish divergence or any failure swings. The Daily MACD remains bearish as it trades below its signal line.

On the derivative front, the NIFTY February futures have shed over 4.01 lakh shares or 1.93% in Open Interest. This confirms some amount of short covering in the Markets. The NIFTY PCR stands at 0.805 as against 0.78.

While having a look at pattern analysis, the Markets breached its previous 52-week low of 7240 levels and this level is likely to act as resistance on its way up. The Markets, with its extent of expected positive opening will open very near to this level and it would be critically important to how it reacts around 7240. Some amount of consolidation / mild selling cannot be ruled out at 7240 and beyond. The Markets, though they have pulled back very sharply, have not confirmed its bottom formation as yet and it continues to remain vulnerable to sell-offs at higher levels. Further, even if it continues to pullback beyond 7240 for some time, it would continue to remain in overall downtrend as it is yet to form a definite bottom and confirm it.

Overall, with the Markets likely to continue to show upticks in the initial trade, it is advised to make fresh purchases on highly selective basis and at very moderate levels. Since the directional bias is not established because what we are seeing are mere technical pullbacks, the exposures should be limited to quality stocks with very high vigil at higher levels.  With a view to maintain liquidity and to keep exposures at modest levels, positive caution is advised for the day.