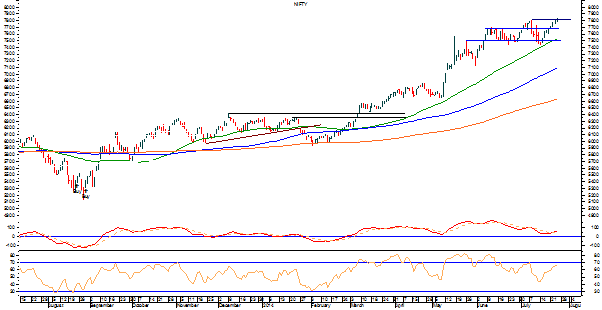 Today’s session again remains critical for the Markets. As evident on the Daily Charts, the Markets attempted a fresh breakout yesterday and today it needs confirmation. Today, expect the Markets to open on a flat to mildly negative note and consolidate in the initial trade. It will need to move past the levels of 7810-7830 confirm the breakout. Until this happens, the Double Top formation would continue to act as immediate resistance. However, any strong breakout shall make the Markets overbought again.

Today, on the higher side, the Markets would be in uncharted territory. The levels of 7835 would act as immediate resistance and the support exist at 7765 and 7710 levels.

The lead indicators show a bias towards consolidation. The RSI—Relative Strength Index on the Daily Chart is 67.2079 and it does not show any failures wings. However, NIFTY has formed a fresh 14-period high whereas RSI has not, and this is Bearish Divergence. The Daily MACD remains bullish as it trades above its signal line.

On the derivative front, the NIFTY July futures have shed over 3.70 lakh shares or 2.20% in Open Interest. This shows that there has been some short covering during the spurt that we saw in the last hour and half of the trade.

Pattern analysis clearly suggest that the Markets tested the previous highs and have attempted to breakout on the upside. Currently a  Double Top formation exists which would pose immediate short term resistance until the Markets moves past these levels again form a bottom above that level. This would be the confirmation of the breakout and until this happens we cannot rule out the possibilities of a consolidation.

All and all, the Markets are poised at a critical juncture. We continue to advice to make purchases on a very selective note. The cautious approach in the Markets should be continued and profits should be protected at every level very vigilantly. While avoiding any fresh shorts, adequate liquidity should be maintained to absorb any volatility that the Markets are likely to display. 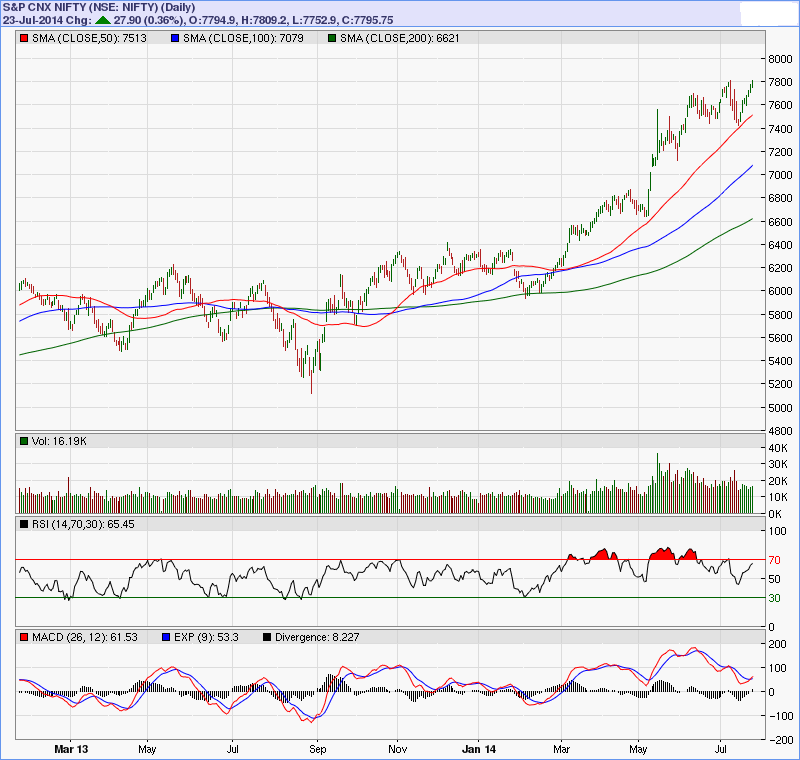 Today, expect the Markets to take some breather from the up move that it has been witnessing since last seven sessions. The Markets have resisted to its previous top of 7809 and today this level would continue to pose some resistance. The Markets are expected to see flat to mildly negative opening and is likely to consolidate and witness some profit taking from higher levels.

For today, the level of 7809 would continue to act as immediate resistance. The supports come in much lower at 7740 and 7670 levels.

The RSI—Relative Strength Index on the  Daily Chart is 65.45 and it does not show any failure swings. However, NIFTY has set a new 14-period high whereas RSI has not yet and this is Bearish Divergence. The Daily MACD continues to remain bullish as it trades above its signal line.

On the derivative front, the NIFTY has added over 4.22 lakh shares or 2.58% in Open Interest. This indicates that building of long positions continued in yesterday’s session as well.

Pattern analysis of the Charts clearly suggest that the Markets have formed a Double Top at 7809 levels and this Double Top formation is expected to pose resistance to the up move in the immediate short term. The Markets will have to move past this level with volumes an sustain above that to make a fresh breakout. However, until this happens some consolidation and profit taking cannot  be ruled out.

Overall, today might be the day of consolidation for the Markets. We advise you to refrain from blanket buying and continue to restrict purchases only to the selective stocks while maintaining adequate liquidity as profit taking bout from higher levels cannot be ruled out. Overall, cautiously neutral outlook is advised for today. 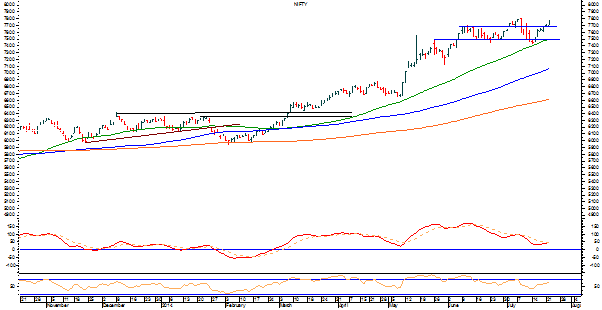 As evident from the Daily Chart, the Markets have attempted a breakout once again above 7700 levels. Today as well, we are set to see a positive opening and the Markets are likely to continue with its up move in the initial trade. Today’s opening would take the Markets near to 7809 level, which it its previous top. It would be critical to see the behaviour of the Markets as against that level.

The RSI—Relative Strength Index on the Daily Chart is 64.0237 and it is neutral as it shows no bullish or bearish divergences or any failure swings. The Daily MACD has reported a positive crossover and it now trades above its signal line and is bullish.

On the derivative front, the NIFTY July futures have added over 13.89 lakh shares or 9.26% in Open Interest. This is a clear indication that fresh longs have been created in yesterday’s session and there had been clear consensus while being on the upside.

Going by the pattern analysis, as evident from the Daily Charts, the Markets have attempted to break out on the upside from its broad trading range of 7500-7710 and today it is likely to continue its up move in the initial trade. However, the Markets will now face resistance against its immediate previous top of 7809 levels. It would be critically important to see whether the Markets moves past this level or facing some profit taking. Intraday trajectory of the Markets would be critically important as well.

All and all, we are set to see buoyant opening today and the Markets are likely to test its previous top of 7809 levels. However, given this fact, we continue to once again sound caution as it is likely that the Markets faces a bout of profit taking near its previous highs. Select stocks shall clearly outperform but it is extremely and critically important that we continue to protect profits at higher levels. Overall, cautious optimism is advised for today. 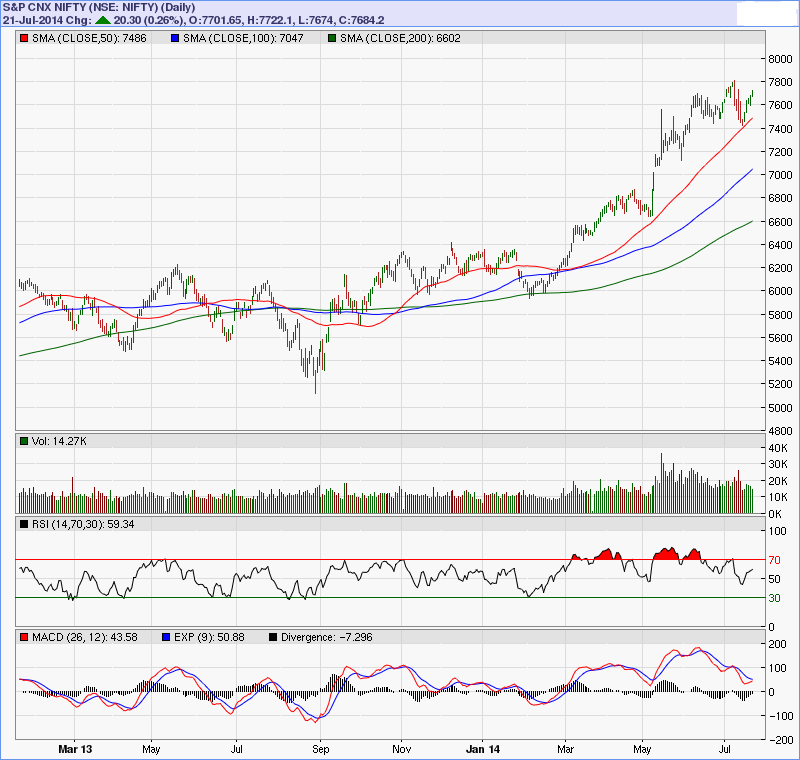 Though the Markets have ended with gains for fifth day in a row, the today’s session is all set to remain more or less on similar lines that of yesterday. Today, the Markets are likely to open again with modest gains and the opening levels would see the Markets once again around 7700 levels. The behaviour of the Markets after opening vis-à-vis the levels of 7700 would continue to remain critical to decide the trend for today.

The RSI—Relative Strength Index on the Daily Chart is 59.34 and it continues to remain neutral without showing any bullish or bearish divergences or any failure swings. The Daily MACD too continues to remain bearish as it trades below its signal line.

On the derivative front, the NIFTY July futures have shed 13,500 shares or nominal 0.09% of Open Interest. Stock futures too have witnessed a very nominal decline in over all Open Interest. The NIFTY PCR stands unchanged at 0.87.

Pattern analysis clearly suggests what we have often repeated in our previous editions of Daily Market Trend Guide. The levels of 7700 have continued to pose immediate resistance for the Markets and the Markets shall try and reach out to its immediate top of 7809 only if it moves past the level of 7700. There are chances that we see some profit taking coming in a gain around 7700 levels as  that is a immediate resistance for the Markets and the upper band of the broad trading range that the Markets have been trading in recent past.

Overall, the behaviour of the Markets post opening around 7700 would be critical. There are chances that the Markets find some resistance near these levels and see some intermittent bouts of profit taking. However, stock specific action would continue and volatility would stay. It is advised to limit fresh purchases while continuing to protect profits at higher levels. Overall, cautious outlook is continued to be advised for today.