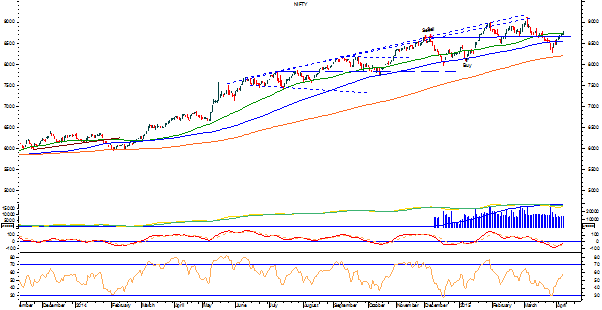 MARKET TREND FOR FRIDAY, APRIL 10, 2015
We can expect a flat to quiet opening once again today and the Markets are generally likely to trade with a positive bias. Though it has moved past the levels of 50-DMA, some amount of consolidation at higher levels still cannot be ruled out with the levels of 50-DMA acting as support. Even in case of any consolidation, the overall bias of the Markets would continue to remain on the upside.

The RSI—Relative Strength Index on the Daily Chart is 59.0135 and it has reached its highest value in last 14-days which is bullish. It does not show any bullish or bearish divergence. The Daily MACD remains bullish trading above its signal line.

On the derivative front, the NIFTY APRIL Futures have shed 96,500 shares or 0.50% in Open Interest. This remains a negligible figure and one can conclude that no major short covering was seen from lower levels yesterday.

Coming to pattern analysis, the Markets have managed to move past the level of 50-DMA and in event of any consolidation, this level is likely to act as support. Barring possibilities some consolidation from higher levels, the overall bias of the Markets certainly remains on the upside. The Markets encounters some minor pattern resistances in between, is likely to consolidate and  likely to move up again. As mentioned often in our previous editions, consolidation would be required and in fact, healthy for the Markets.

Overall, the day remains crucial as the Markets approaches minor pattern resistances. With the quantum of the pullback that we have seen from March 27th lows, even if the Markets consolidates, it would display strength by doing so and would be healthy in the immediate short term. Some amount of volatility is likely to remain ingrained in the Markets. While continuing to make select purchases, cautious outlook is advised for the day. 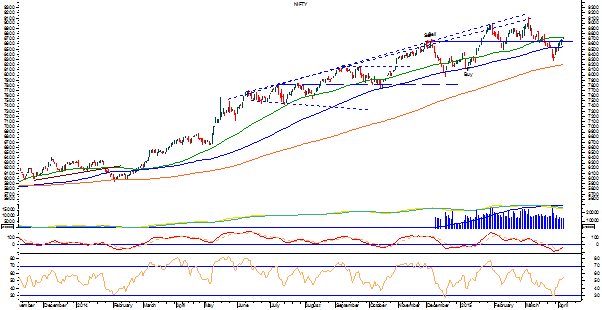 MARKET TREND FOR THURSDAY, APRIL 09, 2015
Markets have continued to display good amount of strength and today as well, we can expect it to open on a fairly positive note. The Markets, as of now, still trade below its 50-DMA and today’s opening is likely to see the Markets open above its 50-DMA. It would be important for the Markets to maintain levels above this and capitalize on possible positive opening. The behaviour of the Markets vis-à-vis the levels of 50-DMA would be crucial to watch out for.

The RSI—Relative Strength Index on the Daily Chart is 55.5613 and it has reached its highest value in last 14-days which is bullish. It does not show any bullish or bearish divergence. The Daily MACD continues to remain bullish trading above its signal line.

On the derivative front, the  NIFTY APRIL Futures have added over 6.15 lakh shares or 3.32% in Open Interest. This is certainly a bullish piece of figure especially after shedding of Open Interest that was observed since last couple of sessions.

Overall, the directional bias of the Markets continues to remain bullish. It is likely to see positive opening and at the same time, it is also likely to consolidate from higher levels. This is likely to keep some amount of volatility ingrained in the Markets. Though some amount of caution is required, selective purchases may certainly be made. Cautiously positive outlook is advised for the day. 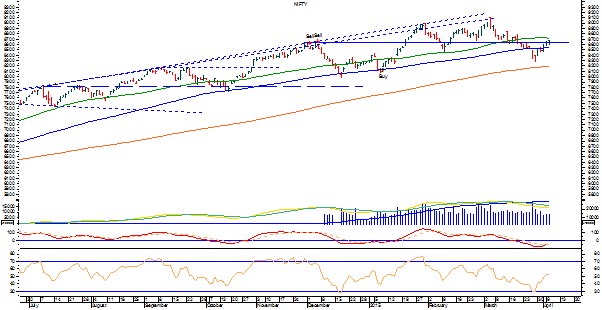 The RSI—Relative Strength Index on the Daily Chart is 52.4098 and it has reached its highest value in last 14-days which is bullish. Also, the RSI has formed a fresh 14-period high while NIFTY has not yet and this is Bullish Divergence. The Daily MACD is bullish while it trades above its signal line.

On the derivative front, the NIFTY APRIL Futures have 47,975 shares or 0.25% in Open Interest. This is negligible as compared to OI shedding that we witnessed in the prior sessions.

Coming to pattern analysis, as mentioned in our yesterday’s edition of Daily Market Trend Guide, the Markets have attempted a pullback from its lows posted on March 27th. However, post this pullback, it is likely that the Markets consolidate a bit around these higher levels before it inches upward again. Such amount of consolidation would be healthy for the Markets and any rise after that would confirm the reversal.

All and all, the Markets still trades below its 50-DMA and therefore, this level would be important level to watch out for in the immediate term. There are fair amount of chances that the Markets see a healthy consolidation at higher levels. This can be in a bit wide trading range but this would keep the overall pullback healthy and confirm the attempted reversal for the Markets. Vigilant protection of positions is advised at higher levels.


The Markets traded precisely on the analysed lines as it opened quiet, traded directionless in the first half of the session but ended the day on a buoyant note. The Markets saw a quiet opening and post such openings traded in a very capped and narrow 20-odd point range until afternoon while slipping in and out of the positive territory. It formed its day’s low of 8573.75. The seconde half of the session, Markets once again saw sustained strength returning. It crawled back into the positive territory and then kept gradually forming new intraday highs. It went on to form the  day’s high of 8667.55 and while sustaining these levels, it finally ended the day at 8659.90, posting a net gain of 73.65 points or 0.86% while continuing to form a higher top and higher bottom on the Daily Bar Charts.


TECHNICAL ANALYSIS OF NIFTY AND MARKET TREND FOR TUESDAY, APRIL 07, 2015

Today remains a crucial day for the Markets. Expect the Markets to open on a modestly positive note and look for directions with a mild upward bias. The expected positive opening would see the Markets opening near its 50-DMA levels and therefore it would be important to see the behaviour of the Markets vis-à-vis this level. Further Markets would also react to the RBI Policy review slated to come in later today.

The RSI—Relative Strength Index on the Daily Chart is 52.3867 and it has reached its highest value in last 14-days which is bullish. Further, the RSI has set a fresh 14-period high while the NIFTY has not yet and this is Bullish Divergence. As expected and mentioned in our yesterday’s edition, the Daily MACD has reported a positive crossover. It his now bullish trading above its signal line.

On the derivative front, the NIFTY April futures have further shed over 3.70 lakh shares or 1.95% in Open Interest.

Returning to pattern analysis, the Markets moved past one of its important pattern resistance of 8640. With today’s mildly positive opening expected, it would open near its 50-DMA levels. There is great likelihood that the Markets consolidate around these levels. The consolidation would in fact make the Markets healthier and the possibility of the Markets consolidating rather than continuing to move up increases as it has been shedding Open Interest in the previous sessions.

All and all, the Markets would see a modestly positive to quiet opening. It is likely to trade in a given range before it reacts to the RBI Policy review. The reaction would be more to the guidance issued as majority of the participants expects a status quo on the rate scenario. With the likelihood of the Markets consolidating on the higher levels, it is advised to keep booking profits on every rise now while keeping the fresh purchases limited and selective.