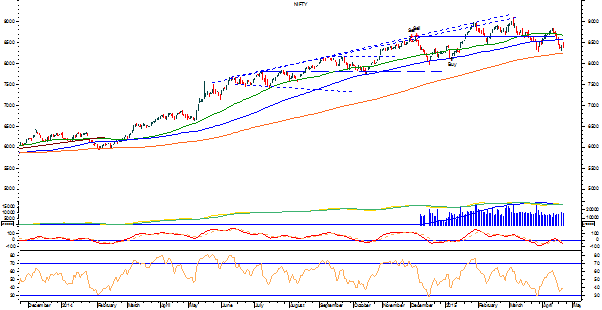 MARKET TREND FOR FRIDAY, APRIL 24, 2015
Markets had a volatile session yesterday and that same amount of volatility is likely to persist today. The Markets are likely to see a quiet to modestly positive opening but is also likely to remain in consolidation mode with some amount of volatility ingrained in it. The Markets are in the process of finding its bottom and are near their pattern support but in event of any weakness creeping, it is likely that it tests its 200-DMA.
For today, the levels of 8505 and 8560 will act as immediate resistance for the Markets today. The supports come in at 8360 and 8250 levels.
The RSI—Relative Strength Index on the Daily Chart is 37.5260 and it remains neutral showing no bullish or bearish divergence or any failure swings. The Daily MACD remains bearish trading below its signal line. On the Candles, If the engulfing bearish pattern occurs during a downtrend (which appears to be the case with NIFTY), it may be a last engulfing bottom which indicates a bullish reversal.  The test to see if this is the case is if the next candle closes above the bottom the current (black) candle's real body.
On the derivative front, the NIFTY APRIL Futures have shed over 9.35 lakh shares or 4.39% in Open Interest. This clearly indicates unwinding of positions from higher levels. It would be very important to see if this gets replaced with fresh buying from higher levels.
Coming to pattern analysis, the Markets have tested the bottoms that it formed on March 27th and have once again attempted to take support from there. The Markets are in the process of finding bottoms and it is likely that it may attempt a pullback once again, but it is also equally important to note that any more weakness in the Markets will increase its probability of testing the supports of 200-DMA.
All and all, the Markets may attempt a pullback but at the same time, the pattern support of the lows formed on March 27th would be important. It would be imperative for the Markets to trade above this levels as any breach will bring it nearer to its 200-DMA. It is advised to refrain from taking any aggressive positions on either side and more emphasis should be laid to preserve and maintain liquidity.  Cautious outlook is advised for the day.

Due to technical glitch, we have not been able to publish Daily Market Trend Guide in regular PDF Format. Brief Market Forecast has been produced herewith. Inconvenience caused is sincerely regretted
BRIEF MARKET FORECAST FOR THE D AY - THURSDAY, APRIL 23, 2015
The Markets nearly approached its 200-DMA and took support near the lows of 27th March while completing 100% retracement on intraday charts but ended the day after nearly a 150-odd points pullback. Today as well, the Markets are likely to open on a positive note and continue with the pullback at least in the initial trade. On its way up, the levels of 100-DMA, i.e.8565  is likely to act as resistance.

RSI on the Daily Charts is 38.9136 is neutral and it shows no bullish or bearish divergence. The Daily MACD remains bearish trading below its signal line. Overall, the Markets have seriously attempted to find bottom. There are chances that the Markets may attempt to make a pullback once again from these levels. However, the possibilities of it consolidating briefly cannot be ruled out but overall, the Markets may attempt a pullback. Selective purchases may be made while remaining vigilant on existing profits, if any. Overall, cautious optimism is advised for the day.

Due to technical glitch, we have not been able to publish Daily Market Trend Guide in regular PDF Format. Brief Market Forecast has been produced herewith. Inconvenience caused is sincerely regretted
BRIEF MARKET FORECAST FOR THE D AY - WEDNESDAY, APRIL 22, 2015

The Markets have ended the fifth day in a row yesterday with losses but in the end recovered some part of it while continuing to add over 10.30 lakh shares  or 5.04% in Open Interest. Today as well, we can expect a quiet and flat opening but there are now chances that we see some attempts to recover by the Markets while the levels of 8470 and 8565 acting as resistance and supports coming in at 8290 levels.

The RSI remains at 35.2345 and Daily MACD remains bearish trading below its signal line. Overall, though the Markets have started some signs of finding bottom and some pullback might be seen, we continue to keep the overall analysis on the similar lines. We continue to reiterate to maintain adequate liquidity and keep fresh purchases while completely avoiding any fresh shorts. Cautious optimism is advised for the day.
Milan Vaishnav,
Consulting Technical Analyst,
Af. Member: Market Technicians Association (MTA), USA
Af. Member: Association of Technical Market Analysts, INDIA

MARKET TREND FOR TUESDAY, APRIL 21, 2015
Markets have continued to remain in bearish grip for yesterday as well and ended the fourth day with losses. Today as well, there aren’t any positive triggers but at the same time, we can once again expect a quiet start to the Markets. The Markets have closed below its 50-DMA and 100-DMA and b of these levels would now act as resistance on its way up.

The RSI—Relative Strength Index on the Daily Chart is 38.1216 and it continues to remain neutral while showing no bullish or bearish divergence or failure swings. The Daily MACD remains bearish trading below its signal line.

On the derivative front, the NIFTY April futures have shed 49,750 shares or nominal 0.24% in Open Interest. These figures, individually remains insignificant. However, we have seen that the Markets have piled up huge amount of short positions while on its decline and this means that there are lot of shorts that exist in the system. This also means that there has been selling in Cash segment which is, in turn, hedged with heavy shorts in the futures.

Coming to pattern analysis, the Markets have breached its 50 and 100-DMA while on its way down. However, the decline is more due to an external feature, i.e. the issue of retrospective tax demand on portfolio investors, and less on technical ground. This reason is evident because, the Markets have declined in the manner as if these key supports never existed. Such news flows tend to disregard the technical factors as well as the technical levels.

Overall, Markets have now shed 385-odd points from the pullback of 493-odd points from the Close of March 27th. This translates into correction of 78% of the pullback. Usually, such levels see some support coming in and owing to huge short positions that have been seen piling up in the futures segment, even a small technical pullback cannot be ruled out. However, it is advised to completely refrain from creating aggressive positions and maintain cautious outlook in the Markets. 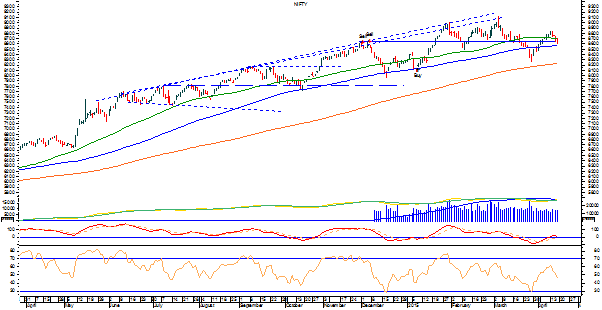 MARKET TREND FOR MONDAY, APRIL 20, 2014
The Markets have continued to correct for the third day in a row on Friday. Today, we can once again expect the Markets to open on a flat note and look for directions. The Markets have breached its 50-DMA and its pattern support levels of 8640 and is now within striking distance of its 100-DMA which is 8567 and this level would now be critically important to watch out for.

On the derivative front, NIFTY April futures have added over 11.32 lakh shares or 5.85% in Open Interest. This is a very clear indication that yet another massive bunch of shorts have been created in the Markets. NIFTY PCR stands at 0.96 as against 1.01.

All and all, given that the Markets have nearly corrected 45% of the total pullback that it saw post March 27th, it is also important to note that it has added huge amount of shorts in the previous three sessions. This is very clearly evident from the increase in OI that we have witnessed. Given this scenario, we continue to strongly reiterate to avoid any shorts. The Markets are likely to find support within very short range and this may lead to recovery from lower levels. While continuing to maintain liquidity, positive caution is advised for the day.