MARKET OUTLOOK FOR FRIDAY, SEP 08, 2017
In our yesterday’s note, we had expected the Markets to remain in a very limited range with positive bias. In line with this analysis, the Thursday’s session saw the NIFTY oscillating in a very narrow range. The Markets made no meaningful headway but still remain resilient and ended the day with minor gains of 13.70 points or 0.14%. We expect a quiet opening once again on Friday but also expect the Markets to continue to trade with positive bias. Short term moment is likely to be maintained with the Markets continuing to trade above all of its averages. 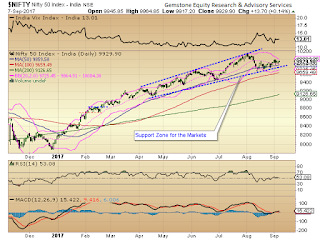 The Relative Strength Index – RSI on the Daily Chart is 53.0796 and it continues to remain neutral showing no divergence; either bullish or bearish. The Daily MACD is flattened but it trades above its signal line and it is bullish. No significant formations were observed on Candles.

The pattern analysis show that the NIFTY continues to trade well within the rising channel as evident in the Charts. However, it is currently tracking its 50-DMA which has now almost become its proxy trend line.

The levels of 20-DMA and 50-DMA now remain in very close vicinity. However, it also reveals that the NIFTY has lost momentum off late but it still continues to trade above all of the averages. Going by the number of days, this is perhaps the highest number of days that the Markets have formed consolidating and trading in a defined congestion zone. Though we still have all the evidences present on the Charts that show that the underlying current still have an upward bias, we need to approach the Markets with some amount of caution. We recommend remaining highly stock specific and vigilantly protect profits at higher levels.

MARKET OUTLOOK FOR THURSDAY, SEP 07, 2017
The buoyant intent of the domestic Equity Markets was interrupted once again by geopolitical tensions around Korean peninsula as the benchmark NIFTY ended the session on Wednesday with a modest loss of 36 points of 0.36%. However, the show of the Indian Markets remained much resilient as recovered nearly half of its early morning losses. Stock specific buying was evidently seen in some distinct quarters as the recovery came along with addition of Net Open Interest. On Thursday, we expect a positive start and expect the markets to oscillate in a limited range with positive intent. 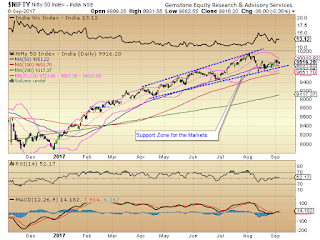 The Relative Strength Index – RSI on the Daily Chart 52.1715 and continues to stay neutral showing no divergence against the price. The Daily MACD stays bullish while trading above its signal line. No significant formations were observed in NIFTY.

Markets have not made any significant and meaningful headway and therefore, it continues to oscillate in a very narrow range. It has formed a small congestion zone but continue to remain in a overall rising channel that it has been trading in over past couple of months.

All and all, F&O data indicate that there will be limited downsides in event of any negative global news flow and the Indian Markets are likely to pose resilience to any major downsides. So long as the NIFTY continues to trade above its short term 20-DMA and 50-DMA, any sentimental dip is likely to attract buying from lower levels. Though the Bollinger bands are getting narrower, they individually do not throw any reading as of now. Given the overall structure of the Markets, we continue expect some stability and expect NIFTY to show some modest upsides again and consolidate at higher levels. Positive caution is advised for the day.

MARKET OUTLOOK FOR WEDNESDAY, SEP 06, 2017
The Markets had a relatively stable session on Tuesday as it recouped some of its previous session’s losses and ended the day with modest gains of 39.35 points or 0.40%. The better part of the session was that the up move has come on back of fresh longs and not just on short covering. This has put the Markets on a relative better footing. We expect a quiet to modestly positive start to the session on Wednesday and expect the NIFTY to progress gradually towards the 10,000-mark again if no untoward developments happen overnight. 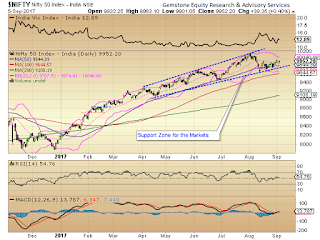 The Relative Strength Index – RSI on the Daily Chart stands at 54.7572 and it is neutral showing no divergence against the price. The Daily MACD is bullish as it continues to trade above its signal line. No significant formations were observed on Candles.

As evident from the Charts, the NIFTY continues to crawl within the rising channel that it has been trading in over past couple of months. It is likely that it will maintain its short term positive momentum given that it is trading above its short term 20-DMA.

All and all, if there are no incremental geopolitical tensions overnight, we expect the Markets to continue with its up move. No major downsides are expected and we may expect the Markets to continue it’s up move and consolidate once again at higher levels. While refraining from shorts, we continue to recommend making selective purchases while guarding profits at higher levels.

MARKET OUTLOOK FOR TUESDAY, SEP 05, 2017
Amid fresh geopolitical tensions, the benchmark NIFTY50 had a negative day on Monday as it ended the day losing 61.55 points or 0.62%. Despite the developments and the news flow that the Global Markets digested, it is important to note that even with the Monday’s decline, there is no structural damage to the Charts. On Tuesday, we  expect a quiet start to the Markets and in absence of any negative news flow, the favorable technical conditions is likely to take over and we can expect the Markets to trade with positive bias. 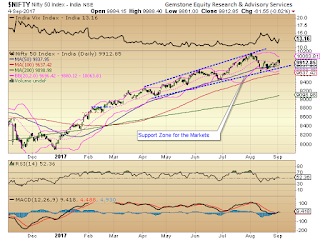 The Relative Strength Index – RSI on the Daily Chart is 52.3607 and it remains neutral showing no divergence against the price. The Daily MACD continues to remain bullish as it trades above its signal line. Though an engulfing bearish line has occurred on Candles, given its place for formation, it holds little or no significance in the present scenario.

If we have a look at pattern analysis, we see that the NIFTY still continues to trade comfortably in the upward rising channel that it has been trading over last couple of months. There is no structural triggers that point towards any major movements on either side.

If we have a broader view, the NIFTY not only trades above its 50, 100 and 200DMA, it also trade above its short term 20-DMA. This reading is enough to conclude that there are no triggers at present that triggers any major downsides. The levels of 50-DMA along with its filter continues to remain a major support to bank upon in the even the Markets consolidate. We expect the Markets to trade extremely stock specific and the select out-performance can be expected from broader indices. While strictly avoiding shorts, cautious optimism is advised for Tuesday.

MARKET OUTLOOK FOR MONDAY, SEP 04, 2017
The Markets ended the session on Friday on a positive note as the benchmark NIFTY50 gained 56.50 points or 0.57%. The positive closing on Friday had some technical significance as well. In the previous days, not only the NIFTY has affirmed and re-affirmed the 50-DMA as its immediate major support, it has also moved past its short term 20-DMA on Friday. We expect a positive start to Monday and despite some possible consolidation at higher levels, we expect the Markets to maintain a overall positive bias. 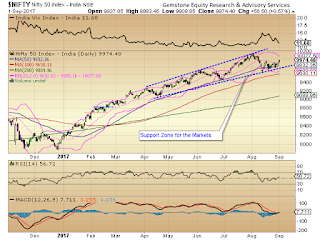 The Relative Strength Index – RSI on the Daily Chart is 56.7249 and it has marked a fresh 14-period high which is bullish. It does not show any bullish or bearish divergence. The Daily MACD reported a positive crossover and it is now bullish as it trades above its signal line. Candles do not show any significant formations on the Charts.

The pattern analysis reveals an encouraging picture. As it is evident on the Charts, the NIFTY remains comfortably placed in the rising channel that it has been trading in. Also, it has reaffirmed the levels of 50-DMA as its sacrosanct support, it has also moved past the short term 20-DMA.

Friday’s session has also seen NIFTY September futures adding 10.42 lakh shares or 6.57% in Open Interest. This indicates fresh longs in NIFTY. The closing of the NIFTY above 20-DMA indicates likely return of short term momentum in the Markets. Though consolidation at higher levels not ruled out, we expect the Markets to maintain positive bias. Any consolidation or minor dips should be continued to make fresh purchases.