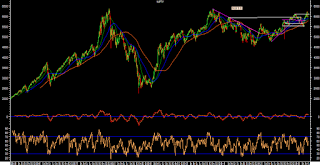 With the Markets consolidating yesterday , today also, like the previous two sessions, the analysis would remain more or less same as the Markets are expected to open on a flat note and look for directions. With the Markets likely to open flat, it is likely to trade around its critical levels of 6100-6110 and the behaviour of the Markets vis-à-vis these levels would be crucially important. Also, the  Markets are likely to react to the Q4 GDP numbers coming in later today and they are not likely to be encouraging.

The lead indicators continue to indicate neutral to mildly bearish bias. The RSI—Relative Strength Index on the Daily Chart is 59.1451 and it does not show any bullish or bearish divergence and also does not show any failure swings and therefore it is neutral. The Daily MACD, however, continues to remain bearish as it trades below its signal line.

On the derivative front, the NIFTY reported 57% of rollovers as against 66% in the previous months. Though the NIFTY-wide rollovers have been lower, the rollovers in Stocks and BankNifty have been reported more or less unchanged.

Overall, the Markets are still devoid of any explicit triggers on the upside. If we read other indicators, then the prices of gold have moved up a bit in previous few days. Further and more importantly, the INR has continued to weaken in spite of some strength in the Markets that we saw in last few sessions. This behaviour of INR to USD is not in sync with the movements in the markets.

All and all, we continue to reiterate the caution in the Markets. As mentioned earlier, the Markets are devoid of any explicit triggers on the upside. Also, it may react, violently on either side to the Q4 GDP numbers which shall come in later today and they are no expected to be encouraging. Given this indecisive technicals which have a mild downward bias and some external news flow pending, it is advised to avoid taking aggressive positions on either side until the directional bias gets confirmed. Overall, reserved and selective approach is advised for the Markets today. 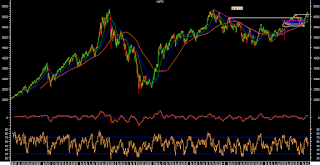 Today is an expiry day of the current derivative series and therefore, expect the session to remain heavily dominated again with rollover centric activities. The analysis for today remain on similar lines as well as the Markets continue to consolidate in a capped range. Expect the markets to open on a flat note and will look for direction and the behaviour of the Markets vis-à-vis its pattern resistance levels of 6100 would be crucially important. Any breach below this level will bring in weakness in the Markets.

The lead indicators continue to point towards mild downward bias. The RSI—Relative Strength Index on the Daily Chart is 57.8350 and it is neutral as it shows no bullish or bearish divergence or any kind of failure swings. The Daily MACD continues to remain bearish as it trades below its signal line.

If we take into account the F&O data and also rely on the pattern analysis, the Markets are likely to continue to consolidate and there are some moderate chances of slipping it below 6100 levels and this can induce some weakness. The Markets will have to maintain levels comfortably above 6100 in order to avoid any weakness creeping in but the chances of some more correction, if not today, then in the next week just cannot be ruled out as there are no explicit triggers on the upside.

All in all, today being the expiry day, the session will definitely remain dominated with rollover centric activities. This is likely to keep the Markets highly volatile and swings on either side cannot be ruled out. With the consolidation continuing and with Markets not taking any clear directional trend, it is continued to be advised to remain light on positions while protecting profits wherever available. Cautious approach is continued to be advised as the bias remains mildly on the downside with no explicit triggers for an up move expect the rollovers induced volatility. 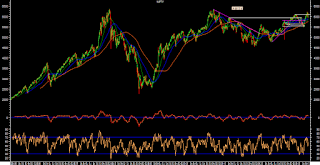 Today’s analysis would remain on similar lines like that of yesterday. We enter the penultimate day of expiry of current derivative series and the session remain highly dominated with rollover centric activities. With flat to moderately negative opening expected, the opening levels would play a crucial role in deciding the trend for the day and the behaviour of the Markets vis-à-vis the levels of 6100 would be important. The Markets have resisted to this level yesterday before closing a notch above this.

The lead indicators point towards neutral behaviour of the Markets with mild bias on the downside. The RSI—Relative Strength Index on the Daily Chart is 58.4475 and it does not show any bullish or bearish divergence or any kind of failure swing and is therefore neutral. The Daily MACD is bearish as it trades below its signal line.

On the derivative front, the NIFTY futures have reported over 31% in rollovers. The total open interest has remained more or less constant signifying no major shorts  were created yesterday.

Overall, if we try to corroborate the behaviour of INR against USD, the USD has strengthened even with the Markets not showing any weakness in last two days. This further signifies the trading sessions were more dominated with rollover centric activities and the bias still remains mildly on the downside. The Markets will see weakness creeping in if it slips well below 6100 levels.

All and all, the Markets are likely to trade in a range with a mildly negative bias. However, any intraday spurt cannot be ruled out as volatility is likely to remain firmly ingrained in last two days of expiry. This is likely to cause the Markets see volatile swings on the either side. Overall, still, aggressive positions on either side should be avoided and concentration should be laid on protecting profits wherever possible until the directional bias gets clear. Continuation of cautious outlook is advised for today. 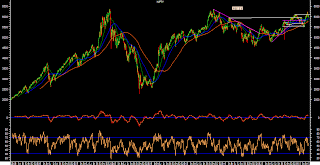 Today, we are likely to see a flat opening in the Markets. The Markets have closed near the pattern resistance levels of 6090-6100. This is the level which it breached on its way down and therefore, it is likely that the Markets shall resist at these levels. The opening, therefore, would be crucial. If the markets manages to move past the levels of 6090-6100, it can move up further, but otherwise, it may again resist at these levels and we may the Markets consolidating again. Rollovers are likely to continue to dominate the session.

The lead indicators remain neutral. The RSI—Relative Strength Index on the Daily Chart is 56.7271 and it is neutral as it shows no negative divergence or failure swings. The Daily MACD continues to trade below its signal line and therefore continues to remain bearish.

Overall, if we go with the pattern analysis, the Markets are likely to resist around 6100 levels. We might see temporary up move if the Markets move past these levels but otherwise, the chances of the Markets consolidating again are higher. However, this being the rollover week, the volatility shall remain and we will see the Markets trading on either side in the volatile manner.

All and all, the opening levels of the Markets and its behaviour vis-à-vis the levels of 6100 shall dominate the directional trend for today. The Markets are expected to find resistance around this levels. However, as mentioned above, this being expiry week, volatile movements on either side cannot be ruled out. It is advised to remain light on positions and taking aggressive positions on either side should avoided. Overall, continuance of cautious outlook is advised for today.