MARKET OUTLOOK FOR FRIDAY, DEC 22, 2017
The session on Thursday remained quite lackluster as the Markets headed nowhere and spent the session in a narrow range. The benchmark NIFTY50 oscillated in a 30-point range and finally settled the day with a modest loss of 3.90 points or 0.04%. The Markets continued to consolidate and going ahead for trade on Friday, we expect this consolidation to continue. The levels of 10490-will continue to pose serious resistance and given the extended weekend this time, we will also see some cautious outlook weighing on the Markets. For any serious up move to occur, the Markets will have to take out the levels of 10490 comprehensively and this may not happen too soon too fast. 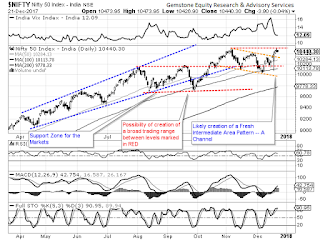 The Relative Strength Index – RSI on the Daily Chart is 60.7827 and continues to stay neutral against the price. The Daily MACD is bullish while trading above its signal line. No significant formations were observed on Candles.

While having a look at pattern analysis, the NIFTY has comfortably moved outside the falling channel and have tested the 10490-mark on expected lines. However, given the overall structure on the Charts, we are likely to see some more consolidation happening before we see any comprehensive and sustainable breakout.

Overall, it is also worth taking note that the short term 20-DMA has cut the 50-DMA from above. The interpretation of this is that if this continues and if the 20-DMA slips significantly below the 50-DMA, it can signal loss of momentum for the Markets in the immediate short term. With Monday being a trading holiday, we are likely to see consolidation happening on a cautious note in the Markets. It is required that the Markets are approached with a highly stock specific focus and on a very cautious note.

MARKET OUTLOOK FOR THURSDAY, DEC 21, 2017
Very much as analyzed in our previous note, the benchmark NIFTY 50 did attempt to inch higher and test the 10490-mark, but it also faced stiff resistance to those levels. The Index after a marginal high saw corrective pressure in the second half of the session. The NIFTY finally ended the day with net loss of 19 points or 0.18%. Thursday’s trade is likely to remain in similar lines. The Markets may see a quiet opening and may also show some buoyant intent but the levels of 10490 will continue to post stiff resistance to the Markets and force it into some more consolidation. 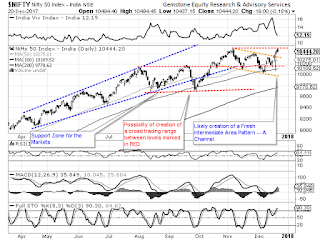 The Relative Strength Index – RSI on the Daily Chart is 61.1090 and it stays neutral showing no divergence against the price. The Daily MACD stays in buy mode while trading above its signal line. On Candles, a not-so-classical Dark Cloud occurred. The size of the candle is relatively small than what is usually required in such formation but this often reiterates the credibility of the resistance area where it occurred.

While having a look at pattern analysis, the NIFTY has managed to move out of the intermediate falling channel that it had created. However, it has inched higher but has met with a stiff resistance at its previous high. Also, the lead indicators remain neutral while marking a lower top though not confirming it.

All in all, while going into trade on Thursday, we recommend maintaining highly stock specific approach to the Markets. We will see select components from specific sectors like INFRA, MEDIA, etc. attempting to relatively out-perform. However, on a broader note, we still expect the Markets to face stiff resistance at 10490-mark despite showing buoyant undercurrent. There are all chances that the Markets may remain vulnerable to selling bouts at higher levels and be forced in consolidation for some more time. Cautious outlook is advised for the day.

MARKET OUTLOOK FOR WEDNESDAY, DEC 20, 2017
On the expected lines, the Markets continued with their up move and had a follow-through session on Tuesday as the Index inched higher and ended the day with net gains of 74.45 points or 0.72%. The session remained within the defined parameters as the NIFTY moved closer to its life-time high level of 10490. Wednesday is likely to see a quiet to modestly positive opening. In all likelihood, the NIFTY may attempt to test 10490 levels but at the same time, it would be immensely important to observe the behavior of the Markets vis-à-vis this lifetime high level of 10490 which is likely to pose resistance to the markets.

The Relative Strength Index – RSI on the Daily Chart is 62.6297 and it has marked a fresh 14-period high which is bullish. The Daily MACD is bullish while trading above its signal line. No significant formations were seen on Candles.

Going by pattern analysis, the NIFTY has successfully managed to break out of the falling channel which was formed as its intermediate trend. The moving past of NIFTY significantly above 10490 would be important for a sustainable up move to occur. Until this happens, we may again see the Markets being forced into consolidation.

All and all, buoyant undercurrent may continue. However, while we approach the levels of 10490 and before a significant breakout occurs, we may see some profit taking happening at higher levels. The Markets remain vulnerable to some minor profit taking bouts and this may instill some volatility into the Markets in general. We recommend making stock specific purchases at modest levels and concentrate more in protecting profits at higher levels.

MARKET OUTLOOK FOR TUESDAY, DEC 19, 2017
The Indian Equity Markets witnessed immense volatility on Monday as the benchmark NIFTY50 nearly swung 300-odd points on either side before settling with a net gain of 55.50 points or 0.54%. The NIFTY saw a gap down opening, directly tested the 100-DMA and then recovered form that levels once the ruling BJP showing improved margin over the Congress. The volatility was expected but the quantum remained much larger than expected. Tuesday will continue to see volatility ingrained in the Markets but may continue to trade with positive bias. The Markets witnessed huge spate of short covering from the opening lows and this is likely to see follow-up up move on Tuesday as well, at least in the initial trade. 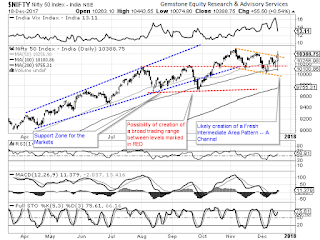 The Relative Strength Index – RSI on the Daily Chart is 58.9091 and it has marked a fresh 14-period high which is bullish. The Daily MACD is bullish as it trades above its signal line.
The Candles showed formation of a bullish engulfing pattern. However, the place of its occurrence makes it relatively insignificant.

The pattern analysis shows that the Markets have managed to move up of the falling channel  that it had created as a part of the intermediate trend. Further to this, the RSI has broken out from a pattern in which it was marking lower tops. All this point towards the follow up move spilling over into  Tuesday’s trade as well.

The volatility being discounted and if we look at the macro picture, the BJP’s win will not be viewed too favorably by the Markets in the long run. The method in which the BJP’s majority was dented as compared to 2012 will instill lot of caution into the Markets and will lead to volatile churning of portfolios. We may see some positive bias going into trade on Tuesday, but each moves should be used to protect profits at higher levels. Caution is advised and we expect Markets encountering resistance once again as it approaches higher levels.

MARKET OUTLOOK FOR MONDAY, DEC 18, 2017
The session on Friday remained much on the analyzed lines as the Equity Markets did witness buoyancy on back of exit polls outcome that reflected the ruling party BJP retaining power in Gujarat but also in the breath, the NIFTY continued to resist to the 10330-10360 zones as well. The benchmark Index spent the entire session moving in a capped range and resisting to this area. It ended with net gains of 81.15 points or 0.79%. 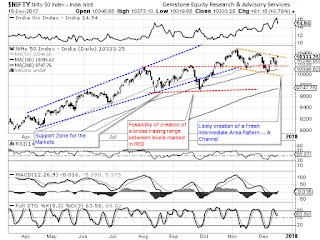 Monday will start a likely volatile week for the Markets. We are all likely to see a initially positive opening but as we go ahead in the session, the Markets would also react in a somewhat volatile way to the Gujarat Election results that will start pouring in as well. Any unexpected outcome may dent this move, but if nothing untoward happens on Monday, we expect the Markets to continue with the heavy short covering that it witnessed on Friday and inch higher.

The Relative Strength Index – RSI on the Daily Chart is 55.8677 is neutral against the price without showing any divergence. The Daily MACD has shown a positive crossover. It is now bullish while trading above its signal line. On the Candles, a Rising Window has occurred. It has emerged after a long lower shadow and usually signals the continuation of the up move.

The pattern analysis show the Markets resisting for the entire day to the upper falling trend line of the falling channel that is created. This is the short term intermediate trend that the Markets are trading in. The RSI too has resisted to the falling trend line as it is subject to independent analysis. A breakout form this formation will precede any significant up move in prices.

All and all, heavy short covering witnessed on Friday and we expect this to continue at least in the initial trade on Monday. The session is likely to remain volatile as the Markets reacts to the Gujarat Election results. It would be important to see that to sustain, the Markets will have to trade effectively above 10360-mark and the short covering needs to be replaced with fresh buying. Positive caution is advised for the d ay.