Friday’s session would remain very critical and also interesting as well. There are chances that the Markets may open modestly positive and may attempt to break out on the upside while making fresh lifetime highs. At the same time, if the Markets fails to give a clear breakout, we can fairly expect it to correct from higher levels and consolidate again. The behaviour of the Markets above 8181 would be critical.

The RSI—Relative Strength Index on the Daily Chart is 64.5484 and it has reached its highest value in last 14-days which is bullish. Though it does not show any bullish or bearish divergences. The Daily MACD continues to trade bullish above its signal line.

On the derivative front, NIFTY saw heavy rollovers on the long side as the November futures added over 43.48 lakh shares or 30.57% in Open Interest. Markets wide rollovers to remained in line on expected lines.

Coming to pattern analysis, the Markets have pulled back after taking support on 100-DMA twice and has attempted to breakout by testing its previous lifetime highs. Overall, given this fact, until the Markets break outs above 8181 levels, it would remain in a broad trading range.

All and all, the Markets may attempt to break out and move past the levels of 8181 towards fresh lifetime highs. However, it also cannot be rule out that there are some technical possibilities of some profit taking from higher levels which can cause the Markets to once again continue to trade in a given range. Overall, any upside should be utilized to book and protect profits. Purchases should be limited and selective until the breakout gets validated and confirmed. Cautious optimism is continued to be advised.

Owing to technical glitch, we have not been able to publish the edition of Daily Market Trend Guide in regular PDF Format. However, brief Market Forecast for the Day is reproduced below. Inconvenience caused is sincerely regretted.

Expect the Markets to open on a modestly positive note and continue with its up move in the initial trade. Being the expiry day of the current derivative series the session would remain dominated with rollover centric activities and apart of this, the Markets would also react to the details of FOMC meeting wherein the QE is widely expected to end.

Talking purely on technical terms, the Markets show all signs of continuation of up move but the above factors are likely to keep the session ingrained with volatility. Overall, with continuing sectoral outperformance, positive caution is advised for the day. 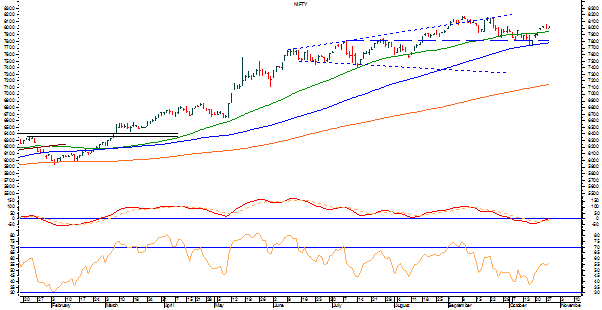 The Markets have continued to remain in consolidation mood and have traded more or less in a capped range. However, given the technicals and this being supported by minor external factors and stable global Markets, there are chances that we see a modestly positive opening. However, the trade is more or less expected to remain within a given range. Further, tomorrow being the penultimate day of expiry of current series, rollovers would continue to dominate.

The RSI—Relative Strength Index on the Daily Chart is 56.6223 and it has reached its highest value in last 14-periods which is bullish. There are no bullish or bearish divergences that are seen as such. The Daily MACD remains bullish trading above its signal line.

Overall, since the expiry is approaching and with just two sessions to go, we can also expect some amount of volatility ingrained in the Markets. Stock specific purchases can certainly be made while vigilantly protecting profits at higher levels. Overall, continuance of cautious optimism is advised for the day. 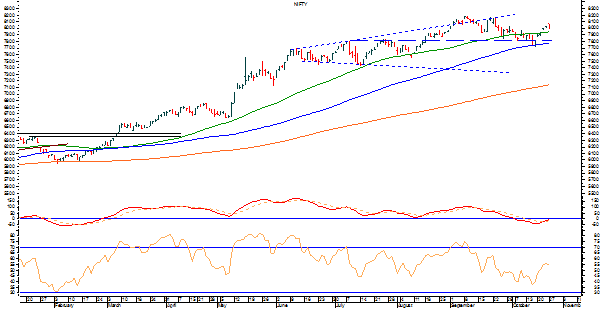 The Markets are likely to trade on similar lines and we are likely to see a session once again in a capped range with some amount of volatility. The Markets are expected to open flat and look for directions.  There are chances that it might consolidate and also remain dominated with some rollover activities. Though no sharp weakness expected but range bound session cannot be ruled out.

The RSI—Relative Strength Index on the Daily Chart is 54.3025 and it remains neutral as it shows no bullish or bearish divergence or any kind of failure swing. The Daily MACD remains bullish while trading above its signal line.

On the derivative front, the NIFTY October futures have shed over 9.94 lakh shares or 5.86% in Open Interest. However, this figure, if read singularly, will not be of much use  as we have expiry coming up and rollovers have already begun.

Going by pattern analysis, the Markets, as mentioned yesterday, continue to remain in broad trading range. Any downside would see the support at its 50-DMA. So long as Markets trade above 50-DMA, it would just consolidate in a capped range with upward bias. Only a dip below its 50-DMA would induce some short term weakness in the Markets.

Overall, until the Markets consolidates and does not show a clear directional bias, it is strongly advised to use any up moves primarily for protecting profits at higher levels. Purchases should be made, but only stock / sector specific with high vigilance at higher levels. Overall, with the Markets likely to have sideways directional bias, only stock specific and cautiously optimistic approach is advised for the day. 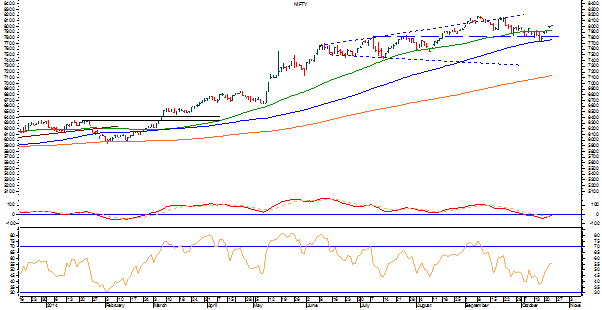 The Markets have formed minor gaps in the previous two sessions and this may act in either way so far as Markets performance is concerned. It can either lend technical strength to the Markets, or may cause the Markets to consolidate in order to fill those gaps. However, with the global markets stable, we can expect a positive opening in the Markets initially but at the same time cannot rule out the possibility of some consolidation in immediate short term.

The RSI—Relative Strength Index on the Daily Chart is 56.0749 and it has reached its highest value in last 14-days which is bullish. Though it does not show any bullish or bearish divergences. The Daily MACD is bullish as it trades above its signal line. A rising window occurred  (where the top of the previous shadow is below the bottom of the current shadow).  This usually implies a continuation of a bullish trend.  There have been 11 rising windows in the last 50 candles--this makes the current rising window even more bullish. However, the formation of such candle can be attributed to a very short session of trade. On the Weekly Charts, the Weekly RSI is 64.2845 and it remains neutral without showing any bullish or bearish divergences or any failure swing. The Weekly MACD remains bearish while trading below its signal line.

On the derivative front, the NIFTY October futures have shed over 1.47 lakh shares or 0.86% in Open Interest. In the coming week, this standalone figure would be of little use as it would be a expiry week and rollovers would begin across segments.

Overall, Markets may witness some ranged movement and might also see some profit taking from higher levels. Any up move should be continued to be utilized to protect profits. Stock specific purchases may be made as secotoral rotation and out performance would continue. Positive outlook with a tinge of caution is advised for the day.