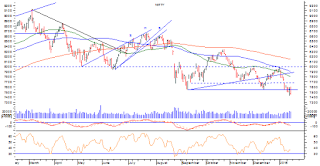 MARKET TREND FOR FRIDAY, JANUARY 15, 2016
The markets are likely to see a flat to mildly positive opening and once again place themselves at a critical juncture. The likely opening levels will see the Markets opening above 7540-7550 levels and it would be once again critically important for the Markets to maintain itself above these levels. It seems that the Markets have formed its bottom for the immediate short term but at the same time, it is likely that all we see is merely a technical pullback while continuing to remain vulnerable to possible downsides in coming weeks.

The RSI—Relative Strength Index on the Daily Chart is 35.92.90 and it remains neutral as it shows no bullish or bearish divergence or any failure swings. The Daily MACD stays bearish as it continues to trade below its signal line.

On the derivative front, the NIFTY January futures have added over 1.58 lakh shares or 0.71% in Open Interest. Shorts continue to exist in the system. NIFTY PCR stands at 0.83 as against 0.80 yesterday.

While having a look at pattern analysis, the Markets have breached the important pattern support of 7540-7550 levels thrice and have pullback from the fresh lows that has made. If we take a immediate short term view, the likely opening levels for today will see the Markets opening above these levels. So long as the Markets maintain itself above these levels of 7540-50, it may see some technical pullback and mild relief rallies. The nearly oversold nature of the Global Markets and likely technical pullbacks there will see our Markets posting some mild technical rallies as well. However, if we take a short to medium term view, the overall structure of the Charts remain bearish and even with the possible technical pullbacks, we would continue to remain vulnerable to the sell offs in the short to medium term.

All and all, given this scenario, we advice to make selective purchases and remain stock specific. It would be important to keep the exposures at moderate levels and even more important to exit with the rallies, if any, and protect profits vigilantly at higher levels. Continuance of cautious outlook is advised for today. 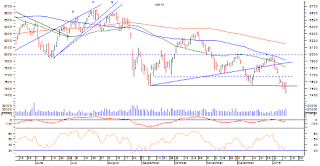 The RSI—Relative Strength Index on the Daily Chart is 37.1729 and it remains neutral as it shows no bullish or bearish divergence or any failure swings. The Daily MACD stands bearish as it continues to trade below its signal line. On the Candles, a long lower shadow occurred which typically suggests bottom formation for the immediate short term.

On the derivative front, the NIFTY January futures have added over 4.13 lakh shares or 1.90% in Open Interest.  The NIFTY PCR stands at 0.80 as against 0.78 yesterday. It should be noted that in absence of any major net FII sell figure, there is large amount of short position that exists in the system.

Coming to pattern analysis, we can have two types of readings; for the immediate short term and the other one for the medium term. If we take the immediate short term view, we can fairly expect that the Markets will show some amount of resilience at lower levels and we can expect a short – covering led technical pullbacks of the kind we witnessed yesterday. At the same time, the levels of 7540-7600 will continue to act as major resistance zone for the Markets in the immediate medium term. So, there are fair chances that we see resilience at lower levels  in the coming day, but see the Markets consolidating at somewhat higher levels with a negative bias.

All and all, so far as today is concerned, there are mild chances that we see the Markets improving as we go ahead in the session. There are chances that even if the rallies are not supported by major buying, some short covering led rallies can be seen. In event of any downsides, shorts should be avoided and very selective stock specific purchases may be made.  In event of pullbacks, such pullbacks should be utilized to protect profits while maintaining a very cautious outlook on the Markets. 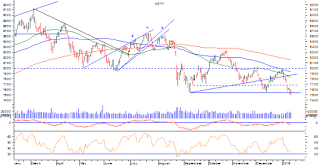 MARKET TREND FOR WEDNESDAY, JANUARY 13, 2016
Markets are likely to see a decently positive opening today following stable Global Markets. However, at this juncture, we would like to add a word of caution. To begin with, today’s expected opening levels will see the Markets opening just above 7540 levels. These are important triple bottom support which the Markets broke on its way down yesterday. Therefore, it would be critically important for the Markets to build up on today’s expected opening gains.

The RSI—Relative Strength Index on the Daily Chart is 32.7747 and it has reached its lowest value since last 14-days which is Bearish. However, it does not show any bullish or bearish divergence. The Daily MACD stays bearish as it trades below its signal line. On the Candles, Bullish Engulfing Pattern has occurred. If this occurs during a downtrend (which appears to be the case with NIFTY), it may be a last engulfing bottom which indicates a bullish reversal.  The test to see if this is the case is if the next candle closes above the bottom the current (black) candle's real body.
On the derivative front, the NIFTY January futures have shed over 1.70 lakh shares or 0.78% in Open Interest. The NIFTY PCR stands at 0.78 as against 0.81 yesterday.

Let us have a look at the pattern analysis. The Markets had the levels of 7540 as its critical triple bottom support and it was also its 52-week low. The Markets breached this levels twice and yesterday it has closed below this critical support but have stayed within its filter. The Markets are very near to being oversold. Also, the Global Markets were oversold much before this and they have been witnessing a technical pullback. Though this does not have direct technical relevance but the temporary buoyant global markets will have some sentimental effect and we could also see some mild technical pullbacks. Today’s expected positive opening will see the Markets opening around or little above 7540 levels and it would be critically important to see the behaviour of the Markets vis-à-vis the levels of 7540.

All and all, it remains important to note that even if we see technical pullback and see the Markets pulling back a percent or a percent and a half, it would remain a mere technical pullback. The overall structure as of today continues to remain weak and therefore, every up move that we see should be utilized to protect profits.  We continue to advise to keep purchases heavily stock specific and selective while continuing to maintain a cautious outlook on the Markets. 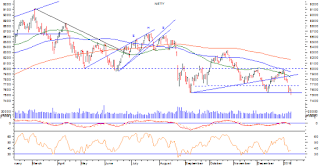 MARKET TREND FOR TUESDAY, JANUARY 12, 2016
Though the Markets survived the scare of the breaching its triple bottom on the Daily Charts yesterday at Close levels, it is still not completely out of the woods. Today’s analysis continues to remain more or less on similar lines as we can expect a quiet and modestly negative start to the Markets. Once again, the levels of 7540 will continue to remain critically important and it would be necessary for the Markets to defend this level and remain above 7540 in order to avoid further weakness.

The RSI—Relative Strength Index on the Daily Chart is 35.1213 and it does not show any failure swing. However, the NIFTY has formed a fresh 14-period low but RSI has not yet and this is Bullish Divergence. The Daily MACD remains bearish as it trades below its signal line.

On the derivative front, the NIFTY January series have added over 3.50 lakh shares or 1.62% in Open Interest. The NIFTY PCR stands at 0.81 as against 0.82. Though this figure of net OI addition clearly suggest that there has been discomfort with shorts at lower levels, this figure has also appeared with net selling in Cash segment by the FIIs.

All and all, the Markets continue to oscillate around 7540 levels but for immediate short term we have some chances of the technical pullback. However, even with the technical pullback, the Markets will continue to remain in the current intermediate downtrend. Therefore, it is advised to make purchases but on a very limited and selective basis while avoiding shorts for the immediate short term. Continuance of cautious outlook is advised for today.