The Markets continue to heavily consolidate sideways along with rising upper trend line as evident on the Daily Charts and this makes the analysis to continue to remain on similar lines as it was in last couple of sessions. We can again expect a quiet opening in the Markets and it would be important for the Markets to trade above 8440 levels in order to avoid any weakness.

The RSI—Relative Strength Index on the Daily Chart is 68.7671 and it continues to remain neutral as it shows no bearish or bullish divergences or any kind of failure swing. The Daily MACD continues to remain bullish as it trades above its signal line. However, it has flattened out and may post negative crossover in event of any weakness.

On the derivative front, NIFTY December futures have added over 46.99 lakh shares or 28.94% in Open Interest. It signifies some good amount of fresh long positions created. The rollovers in NIFTY and Stocks have remained above its 3-Month series average.

Going once again by pattern analysis, the Markets is moving across the upper trend line of the broadening formation. The Markets certainly remains at a critical juncture and it will have to continue to maintain levels above of 8430 in order to avoid any weakness creeping in. Any dip below this level would induce some short term weakness in the Markets.

Overall, it is important to understand that the Markets are not completely out of the woods. It has been posting fresh highs but clear breakout is not achieved which is very typically seen in such patterns. Until clear breakout is achieved there are always theoretical chances some correction. There are chances that we might continue to see pressure from higher levels and therefore it is advised to continue with the policy of controlled exposure and caution in the Markets for the day. 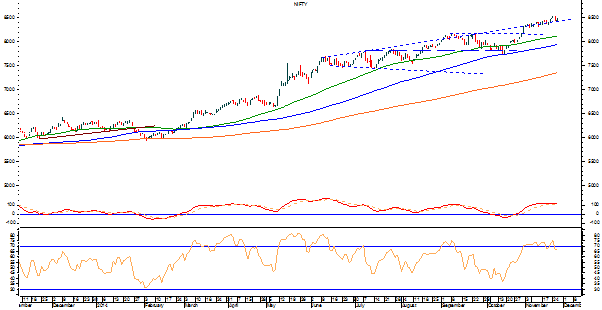 Analysis remains more or less on similar lines once again as the Markets fiercely continue to consolidate above the rising trend line which is evident on the Daily Charts. We can once again expect a very quiet opening in the Markets and the levels of 8440 would remain critical levels for the Markets. It would be important and necessary for the Markets to trade above this level in order to avoid any weakness creeping in.

The RSI—Relative Strength Index on the Daily Chart is 67.6774 and it is neutral as it shows no bullish or bearish divergence or any failure swing. The Daily MACD remains bullish as it trades above it signal line. However, if the Markets continue to consolidate without registering any significant gains, we may see Daily MACD posting a negative crossover.

Going by the pattern analysis, the Markets have been fiercely consolidating along the rising trend line as very much evident on the Daily Chart. On the Weekly Charts, this translate into a distinct broadening formation and it would be very necessary for the Markets to give a clear breakout in coming days. Failure to do so would invite some short term weakness in the Markets. The level of 8440 would remain important as any dip below this level will induce some short term weakness in the Markets.

Overall, we reiterate our view to curtail over exposure in the Markets. Any purchases, as we have been maintaining in our previous editions, should be extremely stock specific. The session is also likely to remain dominated with rollover centric activities. While continuing to protect profits at higher levels, cautious outlook is advised for the day. 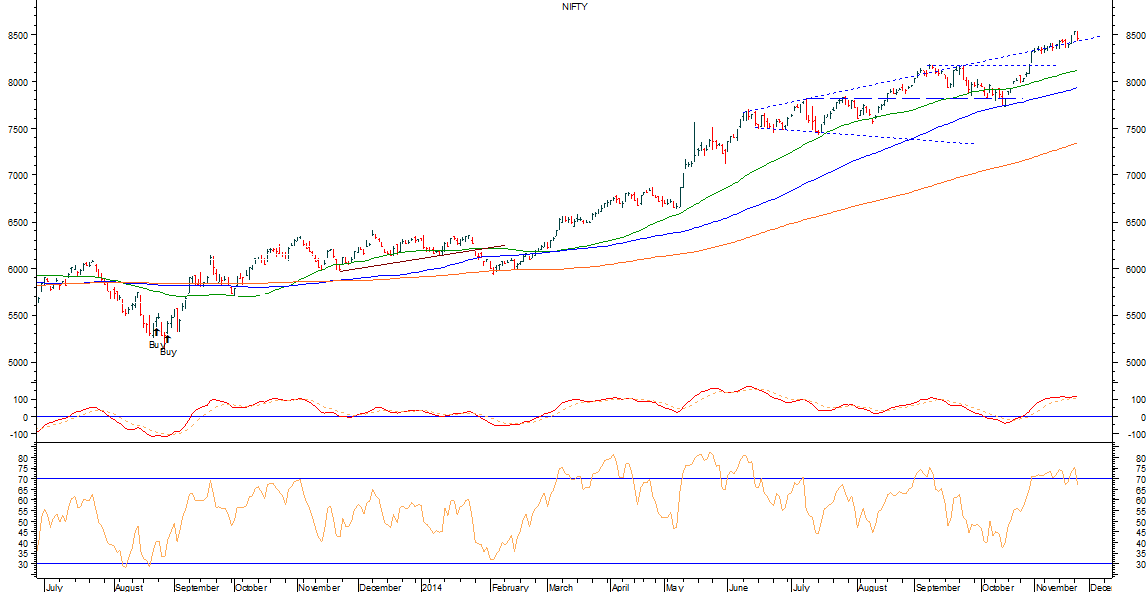 The Markets are again poised at a critical juncture and the opening of the Markets would be very critical to decide the trend for immediate short term. The Markets have attempted a breakout and have closed just above its rising trend line. The Markets may see a modestly positive opening. It would be critically important for the Markets to open and trade above 8430. Any dip below 8430 can induce short term weakness in the Markets.

The RSI—Relative Strength Index on the Daily Chart is 66.9430 and it has just crossed below from a topping formation. It has also reached its lowest value in last 14-days which is bearish. Further, the RSI has made a fresh 14-period low but NIFTY has not yet and this is Bearish Divergence. The Daily MACD still maintains its bullish condition while trading above its signal line.

On the derivative front, NIFTY November futures shed over 58.59 lakh shares or 30.99% in Open Interest while December futures have added 56.88 lakh shares or 93.93% in Open Interest. This being the expiry week, rollovers were clearly seen in NIFTY and stocks.
Going by the pattern analysis, the Markets have attempted a break out but has not yet confirmed it. Trading above the levels of 8430 would be critically important for the Markets.

Even if the Markets see a up move and sees some selling pressure again, it would be really important for the Markets to trade above 8430 levels. Any dip below 8430 levels can induce short term weakness in the Markets.

Overall, the lead indicators suggest that the Markets may continue to see some selling pressure from higher levels. Given this reading, it is advised to refrain from any aggressive positions. Extensive exposures should be avoided and existing profits should be vigilantly protected. While maintaining adequate liquidity and cash, cautious outlook is advised for the day. 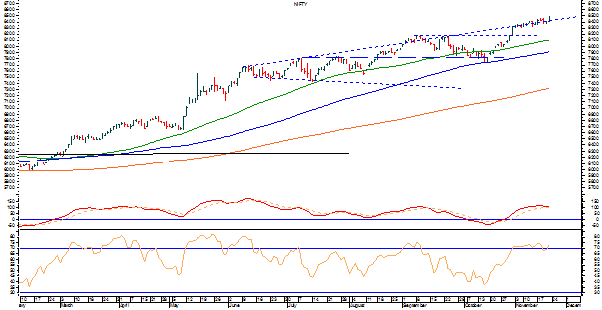 Markets have ended near the high point of the day and technically speaking, it is likely to continue the up move. We can expect a quiet but decent opening and further expect the Markets to confirm the attempted breakout. The Markets are trading “overbought”. This warrants some caution but even technically speaking, the buoyant Markets tend to remain overbought while they consolidate at given levels.

The levels of 8500 and 8535 would act as expected resistance levels as the Markets trade in uncharted territory in case of up move. The supports would come in much lower at 8270 and 8215 levels.

The RSI—Relative Strength Index on the Daily Chart is 72.8735 and it trades in “overbought” zone. It does not show any failure swing but it shows Bearish Divergence as the NIFTY has formed a fresh 14-period high but RSI has not. The Daily MACD continues to remain bullish trading above its signal line. On the Weekly Chart, the Weekly RSI is 73.1207 and it too trades in “overbought” territory. However, it has reached its highest value in last 14-weeks which is bullish as it shows no bullish or bearish divergence. The Weekly MACD is bullish as it has reported a positive crossover.

On the derivative front, the NIFY November futures have shed 4.48 lakh shares or 2.10% in Open Interest. This will have little significance now as we enter the expiry week and this standalone data would be of little use.

Going by the pattern analysis, the markets continue to test the upper rising trend line of a broadening formation on both Weekly and Daily Charts. Given this, it has attempted a breakout from this on the upside. However, at the same time, the Markets remains “overbought” and this may cause the Markets to post gradual up moves while seeing intermittent bouts and consolidation.

Overall, the reading the Daily and Weekly Charts, even though the Markets trade “overbought” at current levels, the under tone remains certainly bullish and buoyant. However, given the overbought nature, the Markets may see volatility remaining ingrained with some profit taking bouts also at intermittent periods. However, defensives are expected to outperform. Overall, while remaining vigilant, cautious optimism is advised for the day.