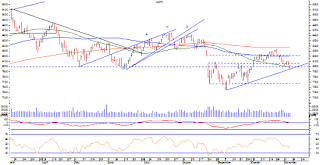 MARKET TREND FOR FRIDAY, NOVEMBER 06, 2015
Markets may open today on a flat to mildly positive note while keeping a heavily cautious eye on the Bihar polls result as the overall structure continue to remain little subdued and cautious. The Markets might see opening around its rising trend line support and it would be once again critical to see if this trend line holds as support. If not, then some more weakness cannot be ruled out. However, there are some chances of some consolidation or a mild relief rally, but cautious would continue to weigh very heavy on the Markets.

The RSI—Relative Strength Index on the Daily Chart is 38.1314 and it has reached its lowest value in last 14-days which is bearish. It does not show any bullish or bearish divergence. The Daily MACD remains bearish as it continues to trade below its signal line.
On the derivative front, the NIFTY November series have added over 3.56 lakh shares or 1.91% in Open Interest.  This indicates initiation of net short positions in the Markets. The NIFTY PCR stands at 0.86 as against 0.90.

While having a look at pattern analysis, the Markets have breached its other patter support of 8000 level and has also closed a notch down below its 50-DMA which stands at 7985 today. Going up, these levels are once again likely to pose resistance to the Markets. However, as of now, the Markets now rests at a short term rising trend line support and it would be important to see once again if the Markets manages to find some base or attempts to take support here. Any further breach will induce some more immediate short term weakness in the Markets. However, there are chances that the Markets might see a relief rally but the sentiment will face resistance from the heavily cautious outlook that the Markets are wearing.

All and all, the Markets are currently at a very critical juncture wherein it has multiple pattern resistances going upwards. On the other hand, it rests at a short term support of a rising trend line and it would be interesting to see if the Markets hold to that support. External factors like Bihar poll outcome will induce some volatile oscillations in the Markets. It is advised to refrain from creating any significant exposure in the Markets and maintain enough liquidity to absorb volatile movements. Continuation of cautious outlook is advised for today. 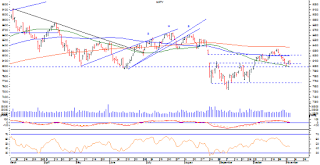 MARKET TREND FOR THURSDAY, NOVEMBER 05, 2015
Markets are expected to open on a flat note and shall struggle to make it above 8050 levels. It would be important for the Markets to move past 8050 levels so as to continue to remain in consolidation state. However, with the modestly lower to flat opening expected, the possibility of the Markets testing its important pattern support zone of 7995-8010 cannot be ruled out which also coincides with its 50-DMA. Therefore, this again keeps the overall analysis on similar lines and the intraday trajectory would be important to watch out for.

The RSI—Relative Strength Index on the Daily Chart is 43.8301 and it has reached its highest value in last 14-days which is bearish. It does not show any bullish or bearish divergence. The Daily MACD remains bearish as it trades below its signal line.

On the derivative front, the NIFTY November futures have shed over 3.03 lakh shares or 1.60% in Open Interest. There has been clear unwinding of positions seen from higher levels given the reduction of Open Interest. The NIFTY PCR stands at 0.89 as against 0.90 levels.

Coming to pattern analysis, the Markets have attempted to take support once again near 8050 levels though it has closed a notch below that. It would be, therefore, important for the Markets to move past 8050 levels to continue to remain in a broad range bound consolidation. However, in event of some more weakness persisting, the markets have possibilities to test the levels of 7995-8010 support zones. These remain one of the important supports for the Markets as any breach will induce weakness for the immediate short term. 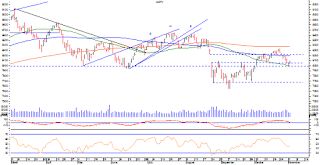 MARKET TREND FOR WEDNESDAY, NOVEMBER 04, 2015
We had mentioned in our yesterday’s edition that the Markets have attempted to form a bottom near its 50-DMA which coincides with its important pattern support, the Markets are slated today to open on a near gap up note. However, in the same breadth, the analysis for today continues to remain on similar lines and it would be important to see if the expected good opening is not sold into and the Markets manages to capitalize on its expected strong opening.

For today, the expected levels of immediate resistance are 8125 and 8180 levels. The supports exist at 8010 levels.

The RSI—Relative Strength Index on the Daily Chart is 45.3525 and it remains neutral as it shows no bullish or bearish divergence or any failure swings. The Daily MACD remains bearish as it trades below its signal line.

On the derivative front, the NIFTY November futures have added over 59,625 shares or just 0.31% in Open Interest. This can be interpreted as nearly unchanged figure. The NIFTY PCR stands at 0.90 as against 0.88 yesterday.

While having a look at pattern analysis, the Markets now exists between important pattern supports of 8050 and 8010 levels. The lower end of this trading range remains more important as it coincides with the levels of 50-DMA just below this. Therefore, in event of any consolidation, it would remain very much important for the Markets to remain above this critical level of 8000-8010. Today’s opening is likely to see it opening well above 8120 levels and it will not be surprising if the Markets attempt to test its another pattern resistance near 8200 levels in coming day. However, in order to do this, it would be important for the Markets to capitalize on each on expected strong opening. It would be critical to see that the rally does not gets sold into.

All and all, we continue to remain on our overall opinion of refraining from shorts even at higher levels. Though any significant up moves should be utilized to protect profits at higher levels. Dips / consolidation should be continued to be used for making selective purchases. However, the Markets will tend to oscillate in a broad range until it moves past 8200 levels. Overall, continuance of positive outlook is advised for today. 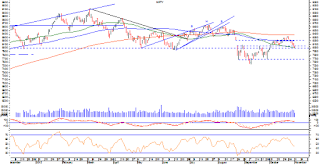 MARKET TREND FOR TUESDAY, NOVEMBER 03, 2015
Though the Markets have ended in the red for six consecutive days, it has attempted to form a base and find bottom yesterday as it took support near its patter support and its 50-DMA. Today, we can fairly expect a positive opening and see relief rally at least in the initial trade. So far, this will make the pattern support hold and the levels of 8050 and 8000 will return as all-important pattern supports in event of consolidation returning.

The RSI—Relative Strength Index on the Daily Chart is 44.4878 and it has reached its lowest value in last 14-days which is bearish. However, it does not show any bullish or bearish divergence. The Daily MACD remains bearish as it trades below its signal line.  The Candles indicate potential short term bottom formation on the Daily Charts.

On the derivative front, the NIFTY November series have added over 1.81 lakh shares or 0.97% in Open Interest. This shows no major short covering took place from the bottom yesterday. Modest long positions are seen to have been built as well. The NIFTY PCR stands at 0.88 as against 0.85.

All and all, with the Markets expected to open above 8050 levels; it has more or less averted any major weakness in the immediate short term. It would be important to see that the Markets keep its head above this and the rallies are not sold into. It is advised to refrain from creating any major exposures and keep it limited and selective. Overall, a cautious outlook is advised for today.