While trading absolutely on expected lines, the Markets had an utterly volatile session as it saw wild swings before ending with modest gains. The Markets saw a modestly positive opening and it traded with capped gains in the morning trade. However, the afternoon trade saw the Markets slipping in to the negative territory. It dipped further in the negative after trading with capped losses in the late afternoon trade as it formed its intraday low of 8794.45. Just when it seemed that the Markets are seeing a decent enough correction, it saw a very sharp up move in the last hour of the trade. The Markets not only recouped its losses but traded back into the positive territory. It further went on to form the day’s high of 8913.45 recovering nearly 120-odd points from the low point of the day. It finally ended the day at 8895.30, posting a modest gain of 26.20 points or 0.30% while forming slightly higher top and similar bottom on the Daily Bar Charts. 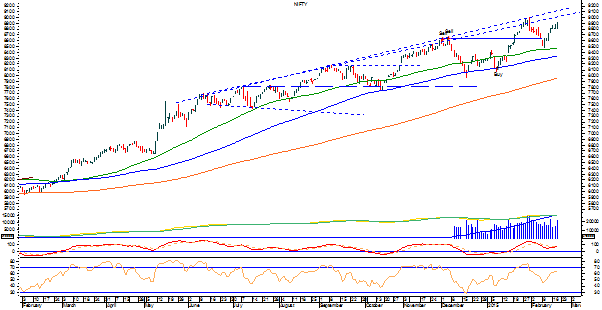 
Today, expect the Markets to open on a modestly positive note and look for directions. The Markets are likely to open and trade positive in the initial trade but in the same breath, it is likely to continue to see mild selling pressure and some amount of consolidation on its way up. Volatility would remain ingrained in the Markets in the immediate short term.

The RSI—Relative Strength Index on the Daily Chart is 65.2621 and it has reached its highest value in last 14-days which is bullish.  The Daily MACD, as we had expected in our yesterday’s edition, has reported a positive crossover and it now trades above its signal line.

On the derivative front, the NIFTY February futures have shed over 6.76 lakh shares or 2.65% in Open Interest. This make somewhat evident that the Markets saw some sharp short covering from lower levels yesterday.

All and all, with volatility not expected to go away; we continue to reiterate the advice of keeping overall exposure at moderate levels. While avoiding fresh excessive leverage, fresh purchases should be made ultra selectively. Overall, while lying more emphasis on protecting profits at higher levels, cautious optimism is advised for the day.


Markets continued with its up move for the sixth day in a row ahead of Union Budget coming up later this month as it ended yet another day with modest gains. The Markets saw better  than expected positive opening an after trading with capped gains in the morning trade, it moved up further. The Markets spent the first half of the session trading with capped gains and moved in sideways trajectory. It was in the last hour and half of the trade that the Markets saw some good amount of strength coming in as it managed to move up further. It went on to form the day’s high  8894.30 in the final minutes of the trade. However, some minor paring of gains was seen as the Markets finally ended the day at 8869.10, posting a net gain of 59.75 points or 0.68% while forming a slightly higher top and higher bottom on the Daily Bar Charts. 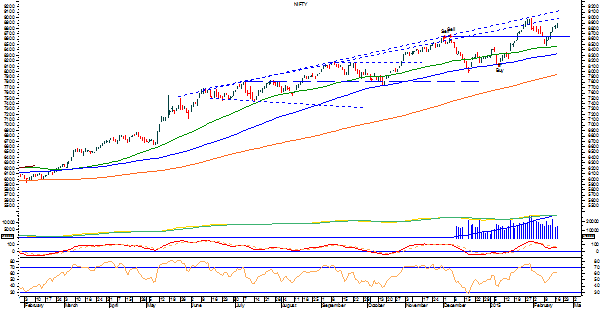 
Today’s analysis continues to remain on similar lines that of yesterday. Markets are likely to see a quiet and mildly positive opening and is likely to trade positive at least in the initial trade. However, though the Markets have clear room for upside, the quantum of caution would increase as it approaches its upper rising channel. Volatility is likely to stay in the immediate short term.

The RSI—Relative Strength Index on the Daily Chart is 64.0798 and it remains neutral as it shows no bullish or bearish divergence or any failure swing. The Daily MACD remains bearish as it trades below its signal line. However, it is likely to post a positive crossover in coming session if the Markets keep its trend intact.

On the derivative front, NIFTY February futures have shed over 5.01 lakhs shares or 1.92% in open interest. The NIFTY PCR stands at 0.97 as against 0.95 yesterday.


Coming to pattern analysis, the Markets are steadily approaching the upward rising trend line which would resist anywhere from 8930 levels onwards. Until this happens, the Markets are likely to continue with its up move. As these levels approaches, we can see some amount of consolidation / mild profit taking at higher levels, even while the Markets keeps the overall trend intact.

All and all, the secular overall trend in the Markets remain intact as of now. However, some amount of volatility would increase as the Markets inches upwards. Some selective purchases may be made as stock specific action would be seen and sectoral out performance especially in the defensives would continue. Overall, while protecting profits at each higher level, positive outlook is advised for the day. 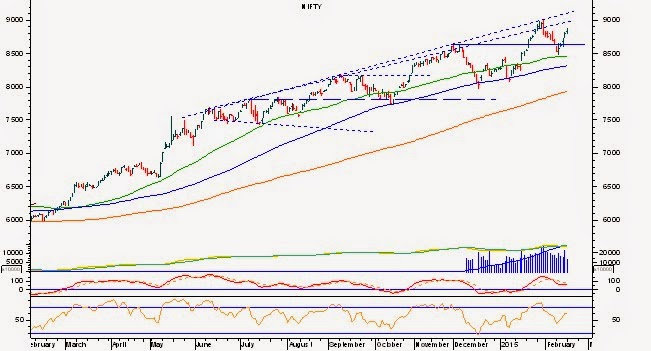 MARKET TREND FOR WEDNESDAY, FEBRUARY 18, 2015
The Markets will open today after a break as yesterday was a trading holiday. Expect the Markets to open on a quiet to mildly positive note and look for directions. The analysis would remain on similar lines that of Monday as we can expect the Markets either to consolidate or face some minor profit taking if it moves on the upside and approaches the upper rising trend line.

The RSI—Relative Strength Index on the Daily Chart is 61.2897 and it remains neutral as it shows no bullish or bearish divergences or any failure swing. The Daily MACD remains bearish trading above its signal line but it is showing signs of possible positive crossover in coming days.

On derivative front, NIFTY February futures have added over 2.42 lakh shares or 0.94% in Open Interest. This figures provides positive signs that no offloading was seen in the last hours of the trade on Monday while the Markets pared its gains.
Coming to pattern analysis, after moving past the levels of 8640, the Markets are consistently posting gains and forming higher tops and higher bottoms on the Daily Charts.

However, as they approach the rising trend line, anywhere above 8920 levels, they are likely to face resistance again. This will cause the Markets to either consolidate or face minor profit taking from higher levels. Though the broader trend continue to remain intact.

Overall, the Markets would open mildly positive and is also likely to extend some gains in the initial trade. However, caution would grow as the Markets approaches higher levels as some minor profit taking or some consolidation at higher levels cannot be ruled out. Overall, it is advised to lay more emphasis to protect profits at higher levels while limiting fresh purchases with a highly selective approach.


The Markets extended the gains for the fourth day in a row as it went on to trade steady in the entire session and ended the day with decent gains. The Markets saw modestly positive opening on expected lines and traded steady in the morning session. It saw some more strength coming in the early afternoon trade. Thereafter, in the second half of the session, it continued to add steady gains while it traded in rising trajectory. It went on to form the day’s high at 8822.10, and maintained these levels till the end. It finally settled the day at 8805.50, posting a decent gain of 93.95 points or 1.08% while continuing to form a higher top and higher  bottom on the Daily Bar Charts. 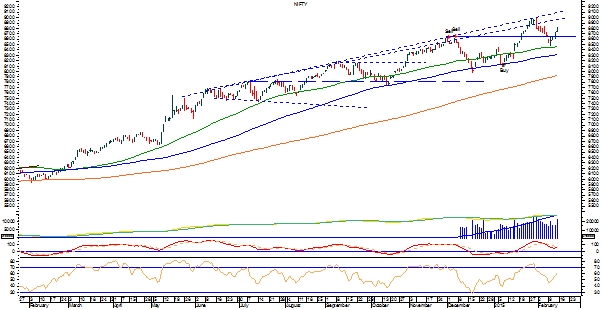 
Expect the Markets to open on a modestly positive and quiet note and trade with gains at least in the initial trade. The Markets are expected to continue extending its gains but at the same time, as it approaches its one of the rising trend lines as evident from the Charts, it would be time to ring in caution again as some amount of consolidation and minor profit taking from those levels cannot be ruled out.

On the derivative front, NIFTY February futures have added over 5.01 lakh shares or 1.98% in Open Interest. This is a positive indicator and suggests that fresh buying has been seen in the Markets in the previous session.

Coming to pattern analysis, the Markets are overall expected to continue to extend gains until they approach the upper rising trend line on the Daily Charts. Even on the Weekly Charts, the upward rising channel is bit steep and this can cause some weariness in the Markets. The Markets still has gap for some 1-1.5% upside on the Daily Chart and on the Weekly Charts, it faces pattern resistance around same levels. It would be extremely critical to watch the behaviour of the Markets above 8900 levels as those levels carry multiple resistances as well and can continue to act as potential top as it has been doing now.

Overall, for the immediate short term, the Markets are likely to continue to extend gains but at the same time, with each higher level now, the possibility of consolidation and minor profit taking cannot be ruled out. Overall, it is advised to keep making selective purchases but at the same time, more emphasis would be required to keep protecting and booking profits with every rise as well.