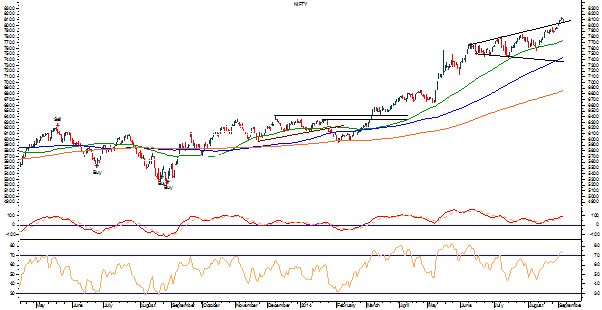 The opening would be very crucial tomorrow as the markets have potentially formed a top at 8141 levels and have shown a throwback by returning back to its breakout point as expected in our previous edition. The Markets will have to maintain the levels above of 8130-50 zone in order to continue with its up move but overall, there are bright chances that the Markets may continue to remain volatile while being forced to consolidate at higher levels.

The RSI—Relative Strength Index on the Daily Chart is 71.9730 and it is neutral as it shows no bullish or bearish divergence or any failure swings. However, it still continues to trade in “overbought” territory. The Daily MACD continues to trade above its signal line.

On the derivative front, the NIFTY September futures have over 9.82  lakh share in Open Interest. This very evidently suggests that what we saw in form was sharp rise was purely short covering and quite a good amount of positions have been reduced. It would be important to see if the Markets continues to drift lower and the breakout signal that it threw proves to be a mere whipsaw; or more simply to say a false / failed breakout signal.

Going by the pattern analysis, even though the Markets have attempted a breakout, as of now it has seen a throwback as it retraced a bit to its breakout levels. However, even if the Markets attempts again to move upwards, the levels would certainly get unhealthy as it would be inching upwards while remaining in “overbought” levels. There are bright chances that the Markets see some more consolidation.

Overall, given this, though one may continue to make fresh purchases on selective note, any profit on the long side should be very vigilantly protected. Any rallies should be first used to book and protect profits and then for buying, and that too on ultra selective basis. With the pattern analysis and reading F&O data along with it, pressure at higher levels and some profit taking from higher levels just cannot be ruled out. Continuance of caution is advised. 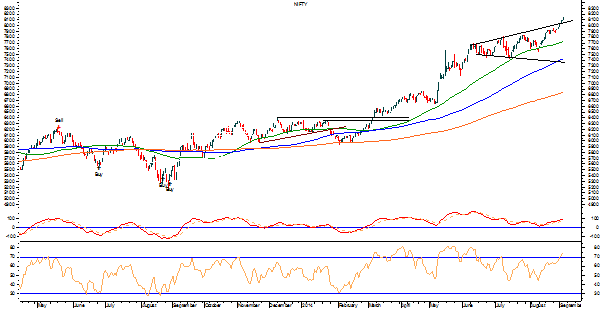 Tomorrow’s opening is likely to be on a cautious note and some correction or some consolidation from higher levels cannot be ruled out. Some weariness in the Markets was evident as the breadth had remained negative. There are chances that even if the Markets see some positive movement, some profit taking or churning of portfolios cannot be ruled out.

The RSI—Relative Strength Index on the Daily Chart is 74.3993 and it has reached its highest value in last 14-days. Though it does not show any bullish or bearish divergence, it is trading in “overbought” territory. The Daily MACD continues to trade bullish above its signal line.

On the derivative front, the NIFTY September futures have added over 2.04 lakh shares or 1.22% in Open Interest. This shows that there was some shedding of long positions but some shorts too seem to have been initiated at higher levels.

As per pattern analysis, the Markets have attempted to breakout of the broadening formation and might continue to trade higher for some time in immediate short term. However, the resistance that it attempted to move past shall act as support in case of some throwback happening and the chances of such throwback happening are bright given the negative market breadth in the previous session and the overbought condition of the Markets. There are also chances that the Markets may come again in the immediate formation after a throwback.

Give all this, the overall analysis and advice remains on similar lines. Though it is always necessary to ride the trend, the level of caution too needs to be elevated to avoid getting caught at higher levels. Long positions should be taken with strict trailing stop losses and that too on very selective note. Volatility is likely to persist. Outlook with elevated caution is advised.

We have not been able to come out with our regular edition of Daily Market Trend Guide in PDF Format. We reproduce brief Market Forecast for the Day below. Inconvenience caused is sincerely regretted.


Markets likely to open on a quiet and mildly positive note again. The Markets have attempted a breakout but currently trade in grossly overbought territory.

Given the global cues, we can expected to see fairly positive start and Markets can trade positive in the initial trade. However, we can also expect to see quite good amount of volatility at higher levels. It is advised to refrain from buying at higher levels. Each further rise should be used to protect existing profits. 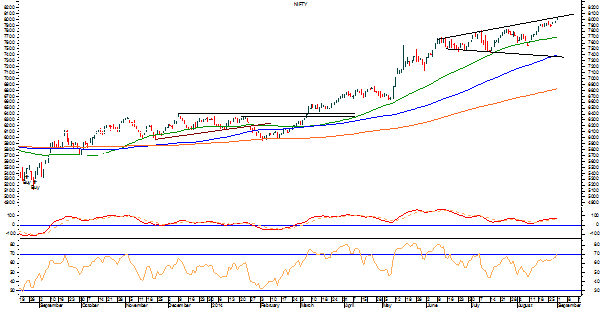 Tomorrow would be a crucial day for the Markets. Technically speaking, the Markets are likely to see positive opening as it has closed near the high point of the day. With the opening trade expected to be in positive, the behaviour of the  Markets vis-à-vis the levels of 8040-8050 would be very crucial as it might meed resistance to the rising trend line of the current broadening formation on the Close charts.

The levels of 8050 and 8075 might act as resistance as the Markets would then trade in uncharted territory. The supports would come in much lower at 7930 and 7875 levels.

The RSI—Relative Strength Index on the Daily Chart is 70.2587 and it has reached the highest value in last 14-days which is bullish. But it does not show any bullish or bearish divergence and it has also now entered the “overbought” territory. The Daily MACD continues to trade above its signal line.

On the derivative front, NIFTY September series have begun by adding over 3.89 lakh shares or 2.44% in Open Interest. This shows fresh positions on the long side have been added and this might aid positive trade the next session.

Returning to pattern analysis, as mentioned earlier, the Markets continue to remain in the broadening formation and this formation is read on the Close (line) charts. With today’s rise, the Markets have close near its resistance of rising trend line as evident from the Daily Charts and it has not yet achieved the breakout. If it achieves a breakout on the upside the would drift further in the  “overbought” territory would be then make any such rise unhealthy.

Given this reading, there is fair amount of chance that the Markets may see positive opening and trades positive in the initial trade. However, given the overall reading on the Close charts the chances of some profit taking at higher levels just cannot be ruled out. Given this, while maintaining adequate liquidity, cautious outlook is advised. 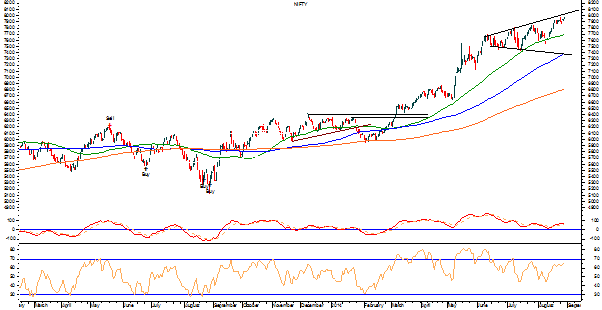 Markets would wake up from a slumber of three days as Friday was a trading holiday on account of Ganesh Chaturthi. GDP numbers, that came in Friday evening are certainly on expected lines which saw the growth figures at 27 month high. This is likely to have its effect in opening tomorrow. Markets may open on a positive note and test its upper trend levels of the broadening formation and might even test 8000 mark while still remaining in the broad trading range.

The RSI—Relative Strength Index on the Daily Chart is 66.0750 and it has reached its highest value in last 14-days which is bullish. It does not show any bullish or bearish divergence as such. The Daily MACD remains bullish while trading above its signal line. On the Weekly Charts, the RSI is 70.2767 and it now trades in “overbought” territory. Also, though it does not show any failure swings, the NIFTY has posted a fresh Weekly High in last 14-periods whereas RSI has not and this is clear Bearish Divergence on the Weekly Charts. The Weekly MACD continues to trade above its signal line.

On the derivative front, the NIFTY September futures added over 50.81 lakhs shares or 46.74% on the expiry day of the August Series.

Returning to pattern analysis, it should be noted in a very clear terms that if we analyse the broadening formation on the Daily Close (line) Charts, on which it holds significance, the Markets have gap of going up to and closing bit above 8000 levels. However, it would still mean that the Markets are within the rising trend line drawn and would not imply a breakout on the upside. Further to this, if we read the lead indicators which are overbought on the weekly charts, the Markets still very much continue to remain in the process of creating a major top.

Keeping in line with the above reading, we would still like to stick to a word of great caution. Even with some positive and strong opening we might get, it is very strongly advised not to get carried away with the upside as the Markets may mark a major top at any given point. Fresh purchases should be kept limited to individual specific stocks among other defensives and profits should be protected heavily. Overall, positive caution is advised.