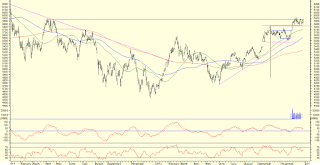 Precisely on expected lines, the levels of 5930-5940 have acted as crucial resistance again as the Markets did not move past them yesterday. Today, expect the Markets to open on a flat to mildly positive note again and look for directions. The intraday trajectory continues to remain critical as the Markets continue to remain in the broad trading range that it has been trading in.

Today, the levels of 5940 shall continue to remain the key resistance levels for today. The supports come in at 5820 and 5775 levels.

As we have been mentioning in the previous editions of the Daily Market Trend Guide, the lead indicators continue to remain neutral to mildly bearish. The RSI—Relative Strength Index on the Daily Chart is 54.9366 and it is neutral as it shows no bullish or  bearish divergence or any failure swings. The Daily MACD is bearish as it continues to trade below its signal line.

On the derivative front, the statistics are mildly bullish. The NIFTY rollover has been little above average and better than the previous month and the NIFTY PCR has begun the new series with 0.88, which is much better.

All and all, keeping this in mind, it is advised to continue to approach the Markets in a cautious and with a stock specific  approach and should also continue to protect profits vigilantly. While avoiding shorts, very selective purchases may be made. Overall, mildly positive, but cautious outlook is advised for today.


The Markets had a buoyant session yesterday as it once again attempted to reach the upper end of the broad trading range that it has been trading in. The markets opened on a positive note, perked up further in the second half of the session and ended the day with decent gains. The markets opened on a positive note and after opening, traded positive in a sideward trajectory for some time. However, it perked up further. It went on to give the day’s high of 5917.30. It hovered around those levels for the last hour of the trade and finally managed to end the day at 5905.60, still posting a decent gain of 49.85 points or 0.85%. It has formed a higher top and higher bottom on the Daily High Low Charts. 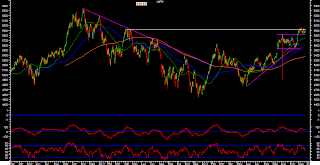 Markets are poised once again at a critical juncture today. Today is the expiry day of the current derivative series. Also, expect a flat to mildly positive opening in the Markets today. With the Markets expected to open around the upper band of the broad trading range that the Markets have been trading in, the trajectory that the Markets forms after opening would be very critical and crucial to decide the trend for today.

The lead indicators still continue to remain neutral to mildly bearish. The RSI—Relative Strength Index on the Daily Chart is 59.9811 and it is neutral as it shows no bullish or bearish divergence or any failure swings. The Daily MACD, however continues to remain bearish as it trades below its signal line.

On the derivative front, total NIFTY Futures have shown a mild shedding in total Open Interest. This signifies that it was some amount of short covering that led to the buoyancy yesterday. The NIFTY PCR rose to 1.12 as against 1.05.

The Markets are poised at a critical juncture because if it moves past the levels of 5930-5940, we may see a short term upward momentum in the Markets. However, global markets are awaiting in  larger quantum, some agreement to be reached on fiscal cliff issue in the US. Any negative outcome, or any lack of outcome can negatively impact the global sentiments.

Speaking purely on technical terms, any move beyond the levels of 5930-5940 levels can bring short term upward momentum. If the Markets do not move past these levels, we may again continue to trade in a broad range that we have been trading in. Selective approach to the Markets with vigilant profit protection is advised with a cautiously positive outlook for today. 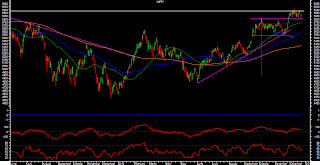 Today, expect the Markets to open on a flat to moderately positive note again and look for directions. We enter the penultimate day of expiry of current derivative series and the trade is expected to remain dominated with rollover activities. Six major global  Markets are shut due to Christmas holidays and this will show in the overall volume. Directionless and range bound movement cannot be ruled out in the Markets today.

The lead indicators of the Markets continue to remain neutral to mildly bearish. The RSI—Relative Strength Index on the Daily Chart is 54.5379 and it is neutral as it shows no failure swings or any bullish or bearish divergence. The Daily MACD is bearish as it continues to trade below its signal line.

On the Derivative front, NIFTY Futures show nominal addition in Open Interest. This signifies that there has been no major addition of longs, and also, there has been no significant offloading / unwinding of any long positions. The NIFTY PCR stands at 1.05.

Having said this, it is important to note that due to year end and Christmas holidays, the Markets will see only “statutory participation” and due to this volumes will continue to remain impacted.

All and all, no major directional move is expected. We can see further weakness if the Markets dips below 5815 levels. But any move, on either side, may not sustain as it is likely to be without any significant volumes and participation. It is advised to continue to remain light on positions and at the same time, keep protecting profits vigilantly. Overall, neutral outlook is advised for today. 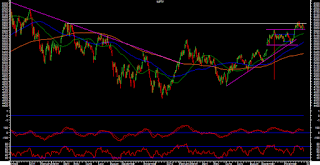 The Markets have still continued to remain in a broad range of 5720-5950 and still continues to remain in this range. For today, we can again expect a flat to moderately positive opening in the Markets. The trend thereafter would depend heavily on the intraday trajectory and the rollover activities as w e enter expiry week today. The week is truncated with tomorrow being a trading holiday on account of Christmas.

With the Markets continuing to remain in abroad range, for today, the levels of 5900-5940 shall continue to act as immediate resistance. The supports are expected to come in at 5810 and further down at 5860 levels.

The lead indicators for the Markets are neutral to bearish. The RSI—Relative Strength Index on the Daily Chart is 53.5913 and it has reached its lowest value in last 14-days. This is bearish. It does not show any bullish or bearish divergence. The Daily MACD continues to remain bearish as it trades below its signal line. On the Weekly Charts,  the RSI is 64.5562 and is neutral as it does not show any bullish or bearish divergences or failure swings. The Weekly MACD continues to trade above its signal line.

On the derivative front, NIFTY December Futures have shed over 40.55 lakh shares or 20.65% in Open Interest. However, this figures presents incorrect pictures as rollovers have begun. However, still net shedding of OI is reported. The NIFTY PCR stands at 1.03 as against 1.08.

Global Markets would stand affected due to no agreements being reached on Fiscal Cliff issue. However, speaking purely on technical grounds, our Markets will continue to remain in a range. Further weakness would creep in if we breach the levels of 5920 on the Daily Charts.

All and all, this being truncated week, the Markets are more or less likely to remain in a broad trading range. While avoiding shorts in the Markets until clear breakdown is there, selective purchases may be made while protecting profits very vigilantly. Neutrally cautious outlook is advised for today.