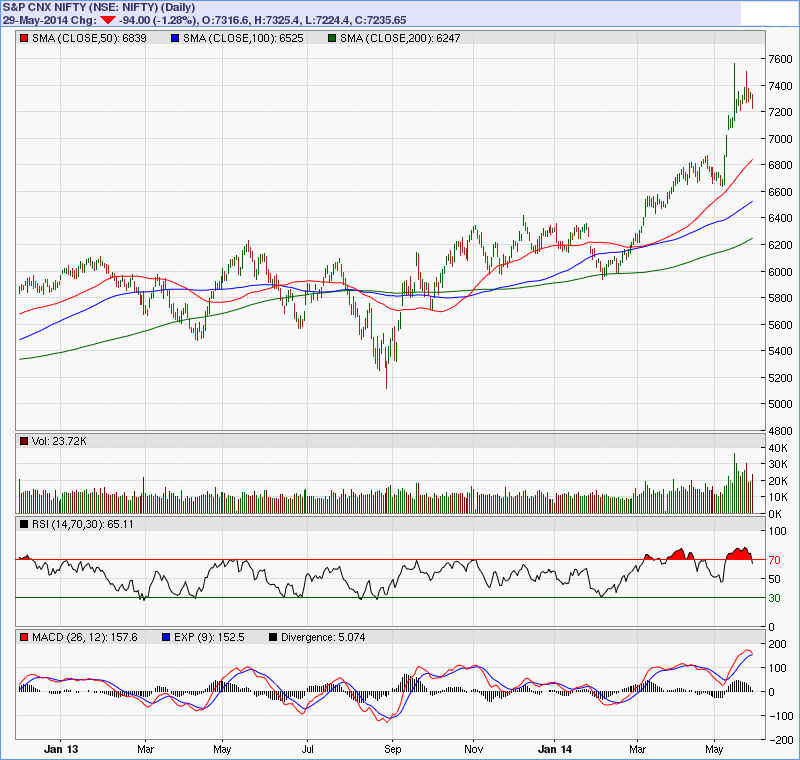 Today as well, expect the Markets to open on a flat to mildly negative note and look for directions. In all likelihood the Markets would continue to witness corrective actions and is likely to drift lower. If no direct correction is seen, it may also continue to consolidate in a capped range with downward bias. The intraday trajectory would continue to remain critical and some amount of volatility may remain ingrained in the trade.

For today, the levels of 7265 and 7280 would act as immediate resistance on the Daily Charts. The levels of 7185 and 7120 are immediate supports for the Markets.

The lead indicators continue to show weariness in the Markets. The RSI—Relative Strength Index on the Daily Chart is 65.11 and though it is neutral and shows no bullish or bearish divergences or any failure swings, it has moved below from being in “oversold territory”. This is bearish for the immediate short term as any up move may again make the markets overbought. The Daily MACD continues to trade above its signal line.

Going by the pattern analysis, the Markets is seeing a much needed correction and if this continues it would be in fact healthy for the Markets. The Markets are likely to test the double bottom support of 7050 if it continues to drift in this manner. However, while reaching here, it may continue to witness intermittent pullbacks but this would be more of consolidation in a trading band rather than any sustainable up moves.

All and all, with the above mentioned technicals, we reiterate the focus on maintaining very light exposures in the Markets. Sectoral out performance would be seen so any dip can be utilized to make very selective stock specific purchases while protecting any profits on existing positions. More liquidity should be maintained and cautious outlook should be continued in the Markets today.

The Markets are likely to open today on modestly negative note and  correct. After having spent the entire session yesterday in a extremely capped range, the Markets are likely to remain in corrective pressure today. Further, today being the expiry day of the current derivative series, the session would not only remain dominated with rollover centric activities but volatility would also remain very much ingrained in it.

Expect the Markets to open on a quiet note and look for directions. To the most likelihood, the Markets would continue with its corrective activities. Today being the penultimate day of expiry of current derivative series, the session would remain dominated with rollover centric activities.

With the levels of 7350 and 7365 acting as immediate resistance and the supports existing much lower at 7260 and 7210, we continue to reiterate maintaining of very light and moderate exposures. Any purchases should be made very selectively. Overall, maintenance of cautious outlook is advised for today.


What seemed to be yet another relentless rise and buoyant session for the Markets turned into an extremely scary and volatile one as the markets ended flat after shedding nearly 200-odd points from its intraday high. The Markets opened on a positive note and soon gained momentum as it kept making gradual highs. At one point in the afternoon trade, the NIFTY moved past the psychological figure of 7500 as it formed its intraday high of 7504. The Markets turned in sideward trajectory after that and it was gripped with extremely volatility in the second half. The Markets saw a sudden and very sharp paring of gains in the late afternoon trade yesterday as it pared all of its gains and dipped into negative. It went on to shed nearly 234-odd points NIFTY from its day’s high as it touched its intraday low of 7269.05. The Markets saw some volatile either side movements and finally ended the day at 7359.05, posting a minor loss of 8.05 points or 0.11% while forming a sharply higher to but lower bottom on the Daily High Low Charts. 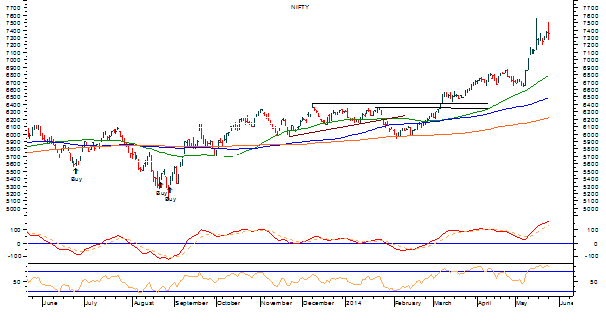 
Today, we can fairly expect the Markets to open on a flat to mildly negative note and look for directions. Given the valuations of the Market and the technical indicators on the Daily Charts they continue to trade extremely overbought and because of the sharpness of the decline that we say yesterday, we continue to advise to refrain from over leveraging in the Markets. The Markets are all likely to continue with its corrective activity today as well.

Today, the levels of 7385 and 7420 would act as immediate resistance levels for the Markets.
The supports exist much lower at 7275 and 7210 levels.

On the derivative front, NIFTY May futures have shed nearly 18.79 lakh shares or 8.94% in Open Interest. This can partly also due to the fact that rollovers have mildly begun and more due the fact that there was very clear unwinding of positions that was seen with the decline in the second half of the session yesterday.

All and all, we continue to reiterate to remain very moderate on the positions. This is due to the fact that the Markets are prone to equally sharp correctives given the current rise of the Markets. While continuing to remain very moderate on exposures, shorts should be avoided and new purchases should be made in extremely selective basis. Overall, continuance of cautious approach is advised for today.

Expect  the Markets to open on a flat to mildly positive note and look for directions. Friday's upsurge has been due to sector specific buying and the Markets continues to trade in "extremely overbought" condition.