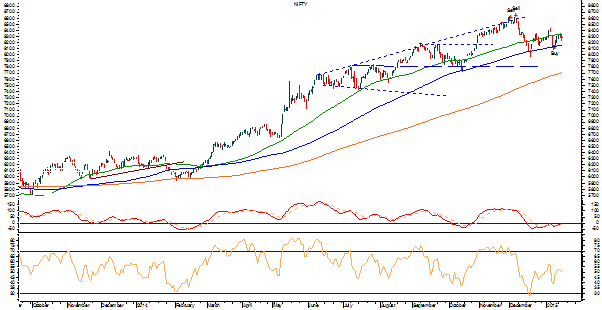 The analysis for the day continues to remain much on similar lines as of last two sessions. The levels of 50-DMA have continued to resist the pullback and the Markets are consolidating around these levels. Expect the Markets to see a modestly lower to flat opening and look for directions. With the intraday trajectory remaining important, its behaviour vis-à-vis the levels of 50-DMA would continue to remain crucial.

The RSI—Relative Strength Index on the Daily Chart is 50.2125 and it remains neutral while it shows no bullish or bearish divergence or failure swings.  The Daily MACD continue to remain bullish as it trades above its signal line.

On the derivative front, NIFTY January futures have shed over 4.06 lakh shares or 2.26% in Open Interest. This springs some caution as the Markets are witnessing more of short covering than buying from lower levels.

While having a look at pattern analysis, the Markets have continued to resist at 50-DMA levels and for any pullback to successfully continue, it will have to move past this level at the earliest. Until this happens we will continue to see the Markets behaving in this fashion with volatility remaining ingrained in it.

Overall, the Markets will continue to remain volatile. For it to resume it pullback, it will have to move past the level of 50-DMA which is 8340 with volumes and good amount of participation. Though the downside remains limited, caution still need to be exercised while making selective purchases. Continuance of cautious outlook is advised for the day.

Markets saw a pretty volatile session yesterday as it swung once again in either direction while it ended the day with minor losses. Expect the Markets to open on a flat to mildly positive note and look for directions. The levels of 50-DMA shall continue to act as resistance today as well and it would be imperative for the Markets to move past this level in order to continue with its up move.

The RSI on Daily Charts stands neutral at 51.5867 and the Daily MACD continues to remain bullish trading above its signal line. The levels of 8341.50, which is the 50-DMA will continue to act as resistance today as well.

Overall, the Markets are consolidating in a ranged manner and the overall trend seems intact going by the pattern analysis. It is advised to refrain from shorts and some selective purchases may be made as stock specific action and sectoral out performance would continue. 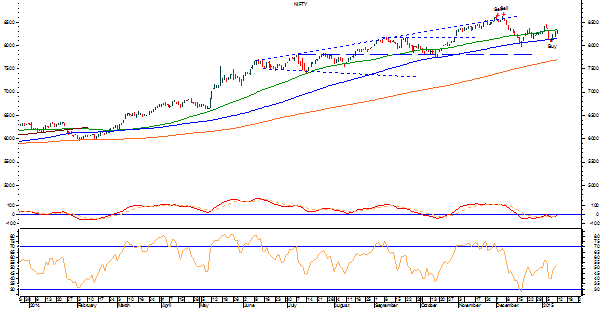 Markets have continued to pullback but have resisted to its 50-DMA level which is 8338. Technically speaking, the Markets are expectedly to give a flat to modestly positive opening and continue with its pullback. It would be necessary for the Markets to move past this 50-DMA levels in order to continue with its up move. Favourable technical indicators supported by better than expected CPI and IIP data will aid to this.

The RSI—Relative Strength Index on the Daily Chart is 53.0424 and it remains neutral as it shows no negative divergences or bullish or bearish divergence. The Daily MACD is bullish as it trades above its signal line.

On the derivative front, the NIFTY January futures have added over 4.42 lakh shares or 2.59% in Open Interest. This is significant as the Markets were rising while shedding its OI. It was necessary for the Markets to add OI while on the rise as it implies that the rise is not merely due to short covering but is aided by fresh long positions.

Returning to pattern analysis, the Markets are still in the process of continuing and confirming its pullback. After retracing sharply from its lifetime highs, the Markets took support twice on its 100-DMA at Close levels and while pulling, it has ended very near to its 50-DMA. It would be imperative for the Markets to move past this level and stays above there in order to continue with its pullback.

Overall, the technical indicators as supported by F&O data stand in favour of the Markets continuing with its pullback. However, lack of volumes, which was evident in previous session, may cause it to consolidate in a given range for some time. However, IIP which stood much better than expected and the CPI coming at notch below expectation will certainly add cheer to the favourable technical indicators. Overall, positive caution is advised for the day. 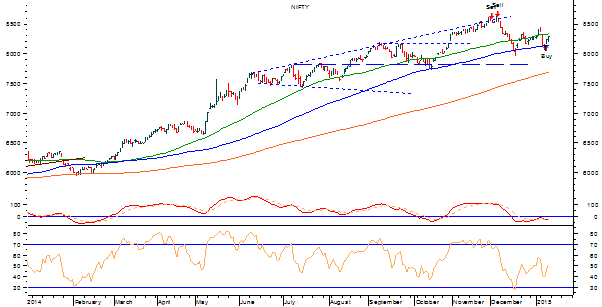 Technically speaking, the Markets have once again attempted a pullback after taking support at its 100-DMA at Close levels. Expect the Markets to open on a quiet to modestly positive note and look for directions. The levels of 50-DMA are likely to pose some resistance. It would be important for the Markets to move past this level to avoid any further consolidation at these levels.

The RSI—Relative Strength Index on the Daily Charts is 50.9454 and it is neutral as it shows no bullish or bearish divergence or any failure swings. The Daily MACD is bullish as it has again reported a positive crossover and now trades above its signal line. The Weekly RSI is 59.1236 and it continues to remain neutral without showing any bullish or bearish divergence or failure swings. The Weekly MACD is still bearish trading below its signal line.

On the derivative front, the NIFTY January futures has shed over 6.87 lakh shares or 3.86% in Open Interest. This remains an area of concern as the it is essential that the Markets builds up fresh longs in order to continue with the up move.

Taking a cue from pattern analysis, the Markets have taken support at its 100-DMA twice and is attempting a pullback. However, on its way up, the Markets  are likely to face resistance from 50-DMA, the support which it broke on the downside. Until this happens, we might see the Markets trading in a broad trading range.

Overall, the overall trend in the Markets seems definitely intact as there is no structural breach on the Daily Charts. The Markets will have to move past the 50-DMA levels in order continue with its up move in convincing manner. Though sectoral out performance would continue we will continue to see stock specific purchases being made. Overall, while continuing to keep leverage under control, positive optimism is advised for the day.