MyMoneyPlant.co.in Wishes you and your Family A Very Happy Diwali and a Prosperous and Healthy New Year

The Markets opens tomorrow for Mahurat Trading session from 6.30 PM to 7:30 PM. The session would more or less remain in a trading range. The Session is likely to remain more or less of ceremonial in nature and no major swings are updated.

Looking a the technical charts, the Markets have formed higher top and higher bottom on the Daily Charts and it is likely to extend its up move in coming sessions. The levels of 8030 and 8065 would act as supports and the levels of 50-DMA, i.e. 7932.90 would act as support at Close levels in case of any range bound consolidation.

The RSI—Relative Strength Index on Daily Chart is 54.9607 and it has reached its highest value in last 14-days which is bullish. It does not show any bullish or bearish divergence. The Daily MACD has reported a positive crossover, perfectly in lines as expected in our yesterday’s edition. It is now bullish as it trades above its signal line. On Candles, A rising window occurred  (where the top of the previous shadow is below the bottom of the current shadow).  This usually implies a continuation of a bullish trend.  There have been 10 rising windows in the last 50 candles--this makes the current rising window even more bullish.

Overall, with just an hour of trading, no major moves are expected. However, in case of any profit taking, the overall range would remain capped with 50-DMA acting as supports. Sector rotation would continue and while remaining selective, overall positive outlook is advised for the day. 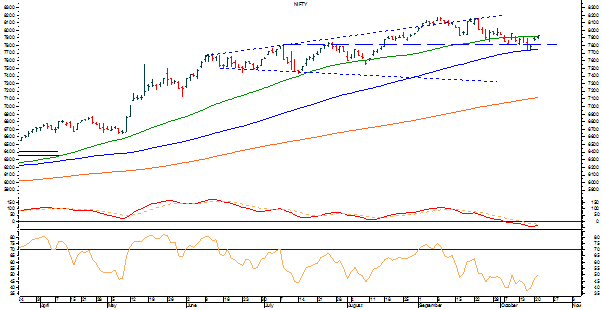 The levels of 7927.91 (50-DMA) would act as resistance if the Markets opens below this. However, with chances of positive opening this level is likely to act as support. Overall resistance and supports are 7975 and 7850 respectively.

The RSI—Relative Strength Index on the Daily Chart is 50.7194 and it has reached the highest value in last 14-days which is bullish. Further, the RSI has set a new 14-period high whereas NIFTY has not yet and this is Bullish Divergence. The Daily MACD, though it remains negative while trading below its signal line, it likely to give positive crossover in coming days if the Markets do not see major declines and managed to trade at least in a range.

On the derivative front, the NIFTY October futures have further added over 5.57 lakh shares or 3.44% in Open Interest. This signifies creation of further long positions and this is likely to keep the Markets in motion.

Going by pattern analysis, the Markets are currently in broad trading range. The Markets took support on 100-DMA twice and now currently trades above its important pattern support of 7800-20 and 100-DMA acting as its supports and the levels of 50-DMA acting as its immediate resistance. With the Markets closing very near to its 50-DMA, it is likely to move past that level as well. In that case we can see some more up tick coming in. Failing this, the Markets would continue to remain in broad trading range.

Overall, it is advised to continue to remain selective in fresh purchases. In event of any bounce on the upside, it should be used to exiting long positions. Any up move should be first utilised for protecting profits in existing positions and then on making fresh selective purchases in the laggards. Overall, with the general bias remaining on the upside, cautious optimism is advised for the day. 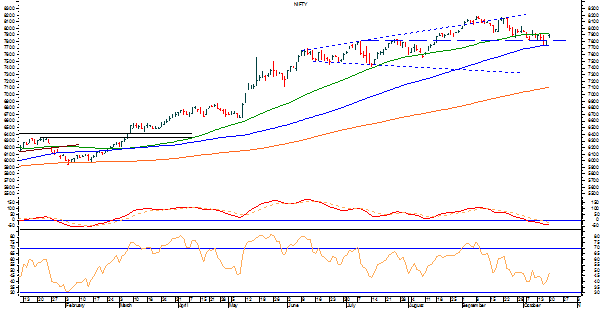 The Markets have created a gap as evident from the Daily Charts and have also resisted to its 50-DMA levels. Expect the Markets to open on a modestly positive note and continued with its up move. However, the levels of 50-DMA would continue to act as resistance and in event of any weakness we might see the Markets trading in a range with the levels of 7800-7820 acting as supports once again.

The levels of 7925 and 7970 would act as resistance and the levels of 7800-20 levels would now once again continue to act as supports.

The RSI—Relative Strength Index on the Daily Chart is 47.4600 and it remains neutral as it shows no bullish or bearish divergences or failure swing. The Daily MACD continues to remain bearish as it trades below its signal line. On Candles, A rising window occurred  (where the top of the previous shadow is below the bottom of the current shadow).  This usually implies a continuation of a bullish trend.  There have been 9 rising windows in the last 50 candles--this makes the current rising window even more bullish.

On the derivative front, the NIFTY October futures have added over 5.86 lakh shares in Open Interest. This is enough indication that the Markets have not seen any short covering which would have otherwise resulted in decline of OI. This can certainly help the Markets and aid it its advance on the upside.

Overall, it is likely that the Markets consolidate before attempting a fresh up move. While the Markets do so, we would also see sector rotation taking place and the current laggards like IT might remain in bit of limelight. It would be extremely imperative to stick to quality stocks and therefore, very selective approach with positive caution is advised for the day. 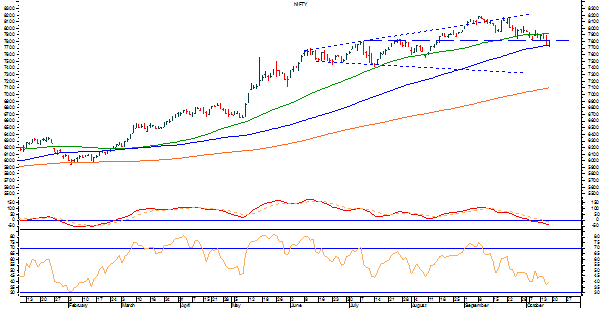 Markets present little precarious picture on the Daily Charts. Expect the Markets to open on a modestly positive note and it is expected that the Markets would continue with its attempted recovery. Fact that it took support nearly twice on its 100-DMA, pullbacks in the global markets, outcome of Maharashtra and Haryana polls on expected lines, etc., would aid our technical attempt of pullback. On the same lines, it would be very important for the Markets to move past the 7800-20 levels in order to successfully post a pullback.

The RSI—Relative Strength Index on the Daily Chart is 39.8413 and it is neutral as it shows no bullish or bearish divergence or failure swings. The Daily MACD remains bearish while trading below its signal line. On the Weekly Charts, the Weekly RSI is 58.2240 and it has reached its lowest value in last 14-weeks and this is bearish. Further, the Weekly RSI has set a new 14-week low whereas NIFTY has not yet and this portrays Bearish Divergence. The Weekly MACD continues to trade below its signal line.

On the derivative front, the NIFTY has added over 12.05 lakh shares or 8.35% in Open Interest. This open interest addition is significant and we can easily interpret that the Markets have added quite significant amount of short positions and it is very much likely that in event of any downside, the levels of 100-DMA are likely to continue to act as supports an these short positions would also act out as supports.

Returning to pattern analysis, the Markets have done both – taking support at its 100-DMA levels nearly twice and also continuing to resist to 7800-20 zone, the support zone which it broke on the downside. Now these levels would continue to act as resistance and it would be very important for the Markets to move past these levels in order to pullback successfully. Failure to do so will result into higher chances of the Markets returning towards its 100-DMA.

Going forward, it is advised to continue with positive caution and approach the Markets accordingly. We might see some decline in overall volumes due to festival season this week however, volatility is certainly to stay in the Markets. Also reading the weekly charts, it is unlikely that the Markets see a runaway rise. Any pullback will see the Markets back in a trading range. While remaining low on overall exposure, positive caution is advised.