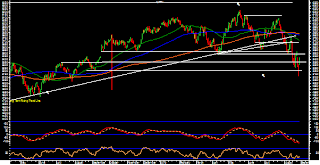 The Markets have risen over 310 points from the intraday lows that it made on 28th, just a day before yesterday. Given this, if we attribute this rise to the settlements rollovers of the shorts in the next month, we can fairly expect the Markets to open flat and consolidate again with the levels of 5500-5515 acting as immediate resistance for the Markets.

Today, the levels of 5500-5515 would act as immediate resistance for the Markets. The supports stand at 5350 levels.

The RSI—Relative Strength Index on the Daily Chart is 41.3263 and it is neutral as it shows no bullish or bearish divergences. It does not show any failure swings as well. The Daily MACD still continues to trade below its signal line.

On the derivative front, both the NIFTY and Market wide rollovers have been decently completed and the two days of recovery can be attributed to heavy rollover of short positions in the Markets.

There are no specific technical cues for today. The Markets have risen over 310 points from the lows of the day since day before yesterday. This can fairly indicate that if the Markets consolidates a bit or sees minor profit taking, it would be fairly on expected lines.

All and all, we are set to have a range bound and also bit volatile session. With the recovery of over 310 points in a go, one cannot rule out the possibility of some profit taking from higher levels. However, some selective out performance would continue to be seen. Some sectors which did not participate in last two days can be expected to out perform. It is advised to concentrate on protecting profits wherever possible in a vigilant manner and remain very selective in making new purchases. 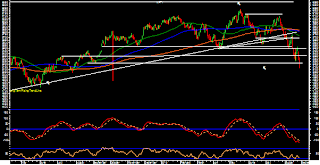 Today, we can fairly expect the Markets to open on a positive note and continue with the up move. The Markets are expected to open positive and continue with its recovery, at least in the initial trade. Today being the expiry day of the current derivative series, the session would certainly remain dominated with rollover centric activity and this may keep the Markets either range bound or volatile.

The levels of 5360 and 5425 shall act as immediate resistance for the Markets. The levels of 5215-5200 would continue to remain and act as important pattern support.

As mentioned in our yesterday’s edition the lead indicators continue to show some likelihood of resilience from the Markets. The RSI—Relative Strength Index on the Daily Chart is 33.0504 and it does not show any failure swings. The NIFTY has formed its new 14-day low but RSI has not and this is Bullish Divergence. The Daily MACD continues to trade below its signal line.

On the derivative front, the NIFTY has shown net addition in total open interest. Even decent rollover has been reported in NIFTY and Marketwide segment as well. Today is the expiry day and we would continue to see the rollovers happening as well.

Having said this, it is important to note that the Markets will continue to remain effected by the factors listed in our yesterday’s edition of Daily Market Trend Guide, which are NOT technical factors. However, we would continue to see resilience from the Markets near 5215-5200 levels as any breach would give a self contradictory reading on the Daily Charts. As mentioned in our yesterday’s edition, any breach below those levels would be a negative break down but would go on making the Markets “Oversold” at the same time.

All and all, the Markets are expected to continue with its up move at least in the initial trade. It is advised to refrain from creating shorts even if we see some minor profit taking later in the session. Any weakness would offer a good opportunity to enter at lower levels. In event of the currency stabilizing, we will see continuation of a strong up move. Overall, cautious optimism is advised for today. 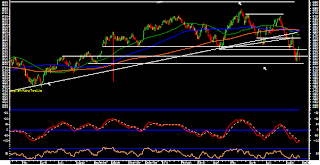 Today as well, expect the weakness to continue in the Markets and expect the Markets to see a lower opening again. However, given the lead indicators, today’s session would be extremely crucial as the Markets would see the opening near its major support and the key would be to see if it recovers post opening lows. Intraday trajectory would continue to be heavily crucial. The most confusing situation would arise when any dip below the levels of 5200 would see a negative break down in the Markets and would also see them oversold at the same time.

Today, the levels of 5230 and 5190 would act as immediate supports for the Markets.  The resistance on the upside would be 5345 levels.

The lead indicators indicate possibility of the Markets showing resilience ONLY IF we consider the technical factors. The RSI—Relative Strength Index on the Daily Charts is 33.1361 and it does not show any failure swings. However, the NIFTY has reached its fresh 14-day low but the RSI has not and this is Bullish Divergence. The Daily MACD remains bearish as it trades below its signal line.

On the derivative front, the total NIFTY futures have reported net addition of open interest in the NIFTY as well as Stock derivatives. This signifies that creation of heavy shorts have continued in the system.

The overall reading is two fold – First, there are many other factors apart from technical and fundamental that are weighing heavy on the Markets. The external economic outlook, increase in oil and gas prices, increase in gold price as well as crude and the most monstrous of all --  the horrendous fall and depreciation and weakening of Rupee. These factors are making the Markets totally defy the technical factors. However, if we take aid of the technical reading, there are feeble chances that the Markets may see some recovery post opening on a weaker note.  The opening would be around its support levels it would be crucial to see if it recovers post opening weak. The another contradictory reading would be – if the Markets drops below 5200, it would technically give a sell signal on the Charts, BUT the Markets would turn “OVERSOLD” at those levels…!!

Given all the contradictory readings, the current technical condition, and keeping in view the external factors other than the technical  that are weighing down the Markets, it is advised that the retail traders and investors should continue to stay away OR create very light positions on the long side taking benefit of these low prices. However, it is advised to maintain adequate liquidity at any point of time while maintaining heavy caution in the Markets.

The Markets had a very volatile session yesterday as it also reacted to the neckline resistance levels mentioned in our yesterday’s edition of Daily Market Trend Guide and also swinged 70-odd points in either direction to end the day on a flat note. The banking stocks remained subdued and the currency continued to weaken taking the toll on the Markets. The Markets opened on a decently positive note and soon gave its intraday high of 5528.70 in the first hour of the trade. The Markets then gradually pared those gains in the morning trade to trade flat. The Markets spent the morning session with capped gains and then dipped into the red to give the day’s low of 5454.45. The Markets saw a sharp 60-odd point spurt in the afternoon trade where in it attempted to scale near its previous highs but could not sustain that recovery either. It pared its gains again and finally settled at 5476.50, posting a very nominal gain of 4.75 points or 0.09% while forming a higher top and higher bottom on the Daily High Low Charts. 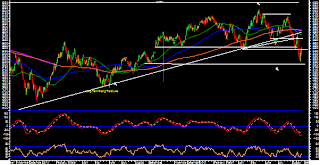 We had mentioned in our yesterday’s edition of Daily Market Trend Guide that the behaviour of the Markets vis-à-vis the levels of 5500 would be important. The Markets reacted from those levels yesterday, twice. This is the double bottom support that the Markets broke on its way down and this would act as immediate resistance. Today, expect the Markets to open on a modestly lower note and look for directions.

The lead indicators continue to remain in place. The RSI—Relative Strength Index on the Daily Chart is 40.6991 and it does not show any failure swings or any bullish or bearish divergence. It is neutral. The Daily MACD continues to trade below its signal line.

On the derivative front, there is net addition reported in the open interest of NIFTY and Stock futures. We have entered the expiry week and the session would continue to remain dominated with rollover centric activities.

From the reading above, two things are evident. First, on the technical grounds, as expected the Markets have reacted to the 5500 levels, these are the levels  -- the double bottom support that the Markets broke on the down side and is now likely to act as resistance. The levels of 5500-5525 would now act as immediate important resistance for the Markets. Secondly, we have entered the expiry week and the Markets are bound to remain dominated with rollover centric activities. This will keep the sessions certainly volatile.

All and all, the reading is that in order to effect the trend reversal and confirm the recent bottoms, the Markets will have to move past the levels of 5500-5525 with conviction. Until this happens the sessions would remain grossly volatile and the consolidation and volatility as we saw yesterday would continues. There are no indications to short the Markets and therefore very selective purchases can be made. Currency would continue to exert pressure on the Markets.