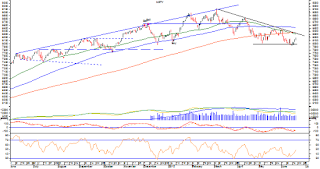 MARKET TREND FOR FRIDAY, JUNE 19, 2015
Today as well, we can fairly expect the Markets to open on a modestly positive note and trade positive at least in the initial trade. The Markets are back in to the broad trading range and they are likely to continue with its up move and approach its falling trend line and / or its 50-DMA in immediate near term. The Markets have held on its major bottom of 8000-mark which will continue to act as major bench mark support in the immediate short term.
For today, the levels of 8245 and 8310 are immediate levels for resistance whereas the supports exist at 8100 and 8050.
The RSI—Relative Strength Index on the Daily Chart is 49.0992 and it remains neutral as it shows no bullish or bearish divergence or any failure swings. The Daily MACD has reported a positive crossover and is now bullish while trading above its signal line.
On the derivative front, the NIFTY June futures have added over 2.29 lakh shares or 1.46% in Open Interest. This is a important indication to show that the yesterday’s up move has not resulted any short covering but is now being moderately replaced with fresh buying.
Coming back to pattern analysis, though the Markets have maintained and held on to its support of 7950-8000 levels, it has just attempted to form the bottom. However, as of today, the Markets still continues to remain in the intermediate corrective trend and still trades within the falling channel. In due course of time, it is expected to continue with its up move and encounter resistance near its 50-DMA levels which also coincides with the falling trend line. Key would be to see if that results into consolidation and if the Markets resume its up move and goes for confirmation of bottom.
All and all, as mentioned, until the confirmation occurs, the Markets will continue to remain in the broad trading range and downward sloping corrective channel. The immediate resistance for the Markets would be near its 50-DMA. Markets, therefore, still has some room for upside before it consolidates. Sectoral out performance will continue and therefore selective buying can be done. Positive caution is advised for the day.
Milan Vaishnav,
Consulting Technical Analyst,
Af. Member: Market Technicians Association (MTA), USA
Af. Member: Association of Technical Market Analysts, INDIA 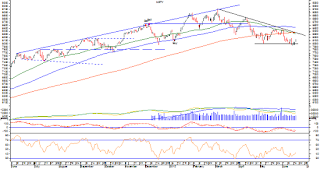 MARKET TREND FOR THURSDAY, JUNE 18, 2015
Today, expect the Markets to open on a modestly positive note and look for directions. Overall, with no objectionable wordings from the Fed Reserve, the Markets are expected to consolidate and continue with its up move. However, it will continue to remain in a broad trading range and some amount of volatility ingrained in it.
The levels of 8150 and 8225 will act as immediate resistance and the supports will come in at 8040 and 7990 levels.
The RSI—Relative Strength Index on the Daily Chart is 43.7610 and it remains neutral without showing a bullish or bearish divergence or any failure swings. The Daily MACD continues to remain bearish as it still trades below its signal line. However, it has flattened out and might report a positive crossover in coming days.
On the derivative front, NIFTY June futures have added 94,875 shares or 0.61% in Open Interest. This shows that there was no major shedding of open positions on Close basis. Also some shorts too seem to have been added in the system.
Coming to pattern analysis once again the Markets now continue  to trade in a  broad trading range of 8000-8350 levels. Though it has successfully managed to come back into the broad trading range after a brief breach of its support,  it has attempted to form a bottom but has not yet confirmed it. It still continues to remain within a intermediate downtrend. However, there is some room still left on the upside following with the Markets might consolidate and attempt to confirm the bottom that it has formed.
Overall, the Markets are likely to trade in a given range with somewhat weak directional bias. However, the overall bias remains on the upside. Some stock specific purchases can be made while protecting profits at higher levels as the Markets will continue to remain vulnerable to profit taking bouts from higher levels. Overall, cautious optimism is advised for the day. 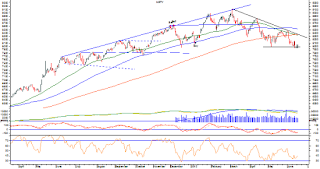 Today, expect the Markets to open on a modestly positive note and there are chances that it continues with its up move, at least in the initial trade. However, the Markets have been lacking in conviction and volume and therefore it would still be critical to observe that the Markets maintains itself above the 8000-mark. Even if the Markets continue to remain in a continuing downtrend, some technical pullback is likely.
For today, the levels of 8090 and 8150 will act as immediate resistance whereas the levels of 8000 and 7950 will act as supports.
The RSI—Relative Strength Index on the Daily Chart is 40.6832 and it remains neutral as it shows no bullish or bearish divergence or failure swings. The Daily MACD continues to remain bearish as it trades below its signal line.
On the derivative front, the NIFTY June futures have shed over 3.46 lakh shares or 2.18% in Open Interest. This signifies the up move has taken place due to short covering from lower levels. However, the total stock futures have added 2.2 crores shares in OI and the NIFTY PCR stands unchanged at 0.89.
Coming to pattern analysis the Markets have managed to hand on to the supports of 8000-levels which is acting as a minor double bottom support. Speaking purely on technical terms, the Markets are currently in intermediate downtrend and such trend typically last from three weeks to three months. The F&O data continues to show tentative fabric of the Markets but again, speaking purely on technical terms, the Markets may show some technical pullback and continue with its attempts to form a potential bottom at these levels. Therefore, the behaviour of the Markets vis-à-vis the levels of 8000-mark continues to remain critical in near future.
Overall, though the Markets have moved past the 8000-mark and trades inside its broad trading range, it has done so while shedding the Open Interest. This keeps it vulnerable to selling bouts from higher levels. The Markets will have to show some good volumes and participation which it has been lacking so for while making up moves. However, there are chances that the Markets see technical pullback even while continuing to remain in present intermediate downtrend. Continuation of cautious optimism is advised for the day. 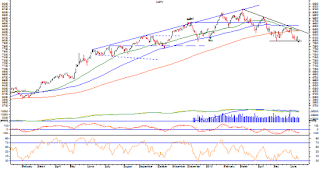 MARKET TREND FOR TUESDAY, JUNE 16, 2015
The Markets have attempted to move back in to the broad trading range by crawling above its 8000-mark but it still continues to remain in the woods. Today, we can again expect the Markets to open on a quiet note and look for directions. Since the Markets once again have a all important task of keeping its head above 8000-mark, it keeps our analysis once again on the similar grounds.
The levels of 8050 and 8135 will act as immediate resistance levels for the Markets. The supports exist at 7950 and 7880 levels.
The RSI—Relative Strength Index on the Daily Chart is 38.3171 and it remains neutral as it shows no bullish or bearish divergence or any failure swings. The Daily MACD remain bearish as it trades below its signal line.
On the derivative front, the NIFTY June futures have shed over 7.61 lakh shares or 4.57% in Open Interest. This is little worrisome figure as it suggest unwinding happening from upper levels. This will have to get replaced with fresh buying if the Markets were to keep its head above the all important 8000-mark.
Going by pattern analysis, the Markets did slip below the immediate double bottom support of 8000 but managed to crawl back inside it. This keeps the Markets into a broad trading range with the levels of 8350 acing as upper resistance. Having said this, as mentioned before as well, it would be critically important for the Markets to remain and trade above 8000-levels. In event of the Markets giving up this level, we can see some more weakness coming in for the immediate short term.
All and all, though the Markets have managed to trade above 8000-mark once again, the pullbacks have not been with required conviction and volumes. Though on the other hand, no major delivery based session has been seen as well. However, the Markets continue to remain in the woods for the time being and this call for keeping the overall exposure limited. Only select buying should be done while maintaining overall liquidity in the Markets.