We have not been able to come out with Daily Market Trend Guide in regular PDF Format. We have reproduced the section "Market Trend for Today" in text format below. Inconvenience is sincerely regretted.
MARKET TREND FOR TODAY
Today, expect the Markets to open on a flat note again and consolidate.Yesterday, the Markets saw some corrective movement yesterday but has remained within its broad trading range and still continues to trade above its critical supports. The volumes and the intraday trajectory that the Markets form would continue to remain important with the levels of 100-DMA continuing to act as immediate resistance.

The RSI--Relative Strength Index on the Daily Chart is 47.1296 and it is neutral as it shows no bullish or bearish divergences or failure swings. The Daily MACD is bullish as it trades above its signal line.

On the derivative front, NIFTY February futures have shed over 8.17 lakh shares or 5.21% in Open Interest. This signifies offloading of positions and profit booking at higher levels.

All and all, it is advised to continue to remain light on positions and avoid over exposure in the Markets. Any downside should used to make selective purchases as sectoral out-performance would be seen. While maintaining adequate liquidity to protect positions, moderate exposures are advised in the current trend while avoiding shorts as Markets may find support near its 200-DMA again. Overall, cautious outlook is advised for today.
Milan Vaishnav,
Consulting Technical Analyst,
www.MyMoneyPlant.co.in
http://milan-vaishnav.blogspot.com
+91-98250-16331
milanvaishnav@mymoneyplant.co.in
milanvaishnav@yahoo.com
Posted by MyMoneyPlant.co.in at 2/21/2014 08:46:00 AM No comments: 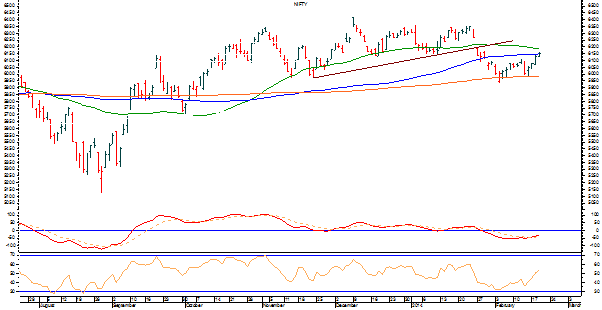 The Markets have closed near its 100-DMA levels which is 6149  today and this levels is again likely to pose resistance at Close levels. This is because, following subdued global cues, the Markets are likely to see a negative opening and open below the levels of 100-DMA. However, in the similar breath, the Markets are also likely to show some resilience  to the opening weakness. The intraday trajectory that the Markets form would be important as there are chances that we may see improvement as we go ahead in the session.

The lead indicators continue to show resilience and remain perfectly in place. The RSI—Relative Strength Index on the Daily Chart is 53.4670 and it has reached its highest value in last 14-days which is bullish. It does not show any bullish or bearish divergence. The Daily MACD remains bullish as it continues to trade above its signal line.

On the derivative front, NIFTY February Open Interest has remained unchanged as it has added some 8450 shares or just 0.05% in Open Interest. From this, it becomes fairly clear that the spurt that we saw yesterday has resulted into fresh buying, or if we put it otherwise, it has not seen any sharp short covering either.

Overall, once again returning to pattern analysis, the Markets have resistance at Close at 6149 levels which is the 100-DMA and going further at 6185 which is the 50-DMA. However, if the Markets manage to move past the levels of 100-DMA with good volumes and participation, it should not face much difficulty in inching upwards.

All and all, the Markets would see some subdued opening but at the same time, it is likely to show resilience. It is likely that we may see improvement in the levels as we  go ahead in the session. In case of any downside, the volumes are likely to remain low resulting into limited downside and some consolidation. Shorts should be avoided and any downside should be used to make very selective purchases. Overall, continuance of cautious optimism is advised for today. 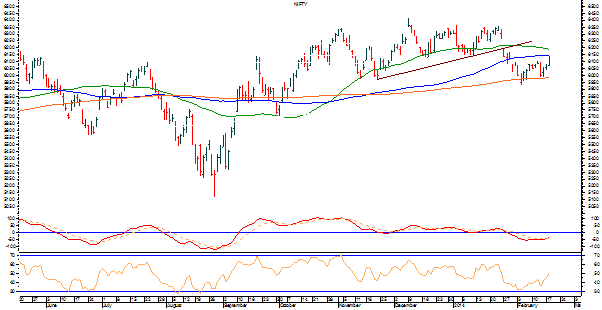 Today would again be a session of consolidation for the Markets, at least in the initial trade. The Markets are likely to open on a flat and quiet note and look for directions. The levels of 100-DMA is likely to act as very near resistance and the Markets may see some consolidation before it inches upwards. The intraday trajectory that the Markets forms and the volumes would be critically important.

The lead indicators continue to firmly remain in place. The RSI—Relative Strength Index on the Daily Chart is 50.9018 and it has reached its highest value in last 14-days which is bullish. It does not show any bullish or bearish divergence. The Daily MACD remains bullish as it continues to trade above its signal line.

On the derivative front, NIFTY Futures have shed 5.70 lakh shares or 3.51% in Open Interest. This indicates that the rise that we saw can be attributed to the short covering in the Markets. However, some addition has been seen in the key stock futures which have seen fresh buying.

Going by the pattern analysis, the Markets have attempted to break out of the trading range that it has been trading in. However, it is yet to move past the 100-dma and this level is likely to continue to act as immediate resistance for the Markets. While it attempts to move past the levels of 6150, it will have to do so with good amount of participation and volumes in order to make the upward breakout more sustainable.

All and all, the Markets still continues to remain in broad trading range. The intraday trajectory of the Markets and the behaviour vis-à-vis the levels of 100-DMA would be very important today. It is advised to continue to vigilantly protect profits at higher levels. Very selective purchases may be made as well. Overall, cautious but positive outlook is advised for today. 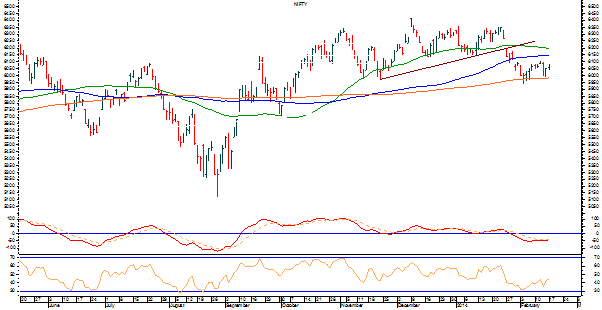 For today, the levels of 6100 and 6145 would act as important resistance levels for the Markets. The 200-DMA level of 5981 would continue to act as key support on the Close Charts.

The lead indicators continue to remain in place. The RSI—Relative Strength Index on the Daily Chart is 44.9961 and it has reached its highest value in last 14-days which is bullish. The RSI has formed a new 14-day value while NIFTY has not yet and this is Bullish Divergence. The Daily MACD, as we have been mentioning in our previous editions of Daily Market Trend Guide has reported as positive crossover and is now bullish as it trades above its signal line.

On the derivative front, NIFTY February futures have added 48,550 shares or 0.30% in Open Interest This shows that there has been no short covering or any offloading  of positions yesterday. It would be important to see if fresh longs get added today.

Going by the pattern analysis, the Markets have taken support on its 200-DMA for multiple times and it now continues to trade in a broad range with the levels of 6100-6150 (100-DMA) acting as the upper band of the trading range. The previous pullback from the 200-DMA did not sustain as there was total lack of participation and volumes. With the Markets now attempting to pullback again, the volumes would play important role in lending sustainable directional bias to the Markets. 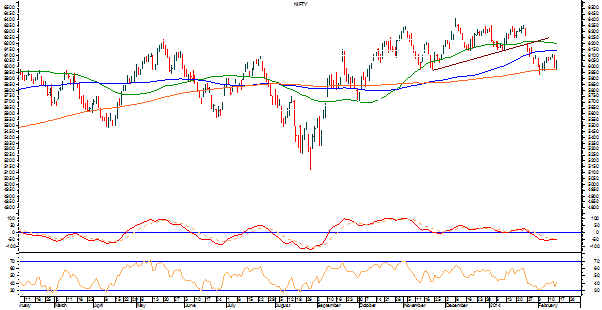 The levels of 6095 and 6140 would act as immediate resistance levels for the Markets the levels of 5981 in form of 200-DMA would continue to act as major support at Close levels.

The lead indicators continue to remain in place. The RSI—Relative Strength Index on the Daily Chart is 41.9915 and it continues to remain neutral without showing any bullish or bearish divergence or any failure swing. The Daily MACD remains bearish at it trades below its signal line.

On the derivative front, NIFTY February futures have shed over 4.51 lakh shares or 2.71% in Open interest. This shows some short covering was seen from lower levels on Friday. We can draw two conclusions from this. One, the spurt that we saw on Friday was not because of any fresh buying but because of short covering from lower levels. Two, however, this also means that the levels of 200-DMA held out as major support once again and we can now see fresh buying coming in from these levels.

The pattern analysis of the Charts still shows no structural breach in any manner. The Markets took support on the 200-DMA couple of sessions back, recovered from those levels, but came back once again as the pullback was seen without any volumes. This time as well, it has once again taken support at its 200-DMA. With the pullback happening from this level, it would be very critical to see if it comes with volumes.

All and all, currently with no technical breach on the Charts as yet, the Markets may continue with its up move in the initial trade. However, the Markets would continue to remain in broad trading range and the volumes would play very critical part in deciding any directional bias. We continue to advise to remain light on position and keep limited exposure while protecting profits at any levels. Any buying, if done, should be done very selectively. Cautious optimism is advised for today.