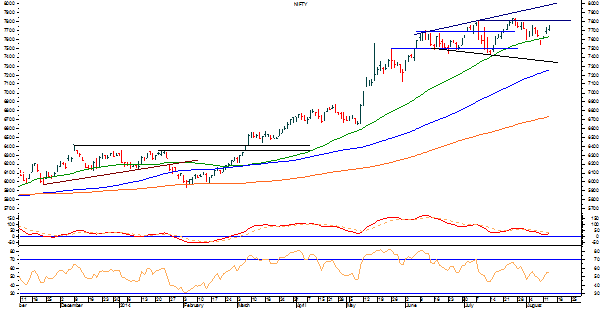 Today, we are once again set to see a quiet opening. The analysis for today remains more or less again on similar lines. The Markets continue to consolidate at higher levels on declining volumes and it would be critical to see if they are able to advance their pullback. The intraday trajectory and the volumes would continue to play a critical role in determining trend in coming days. We have short trading week as tomorrow would be a trading holiday on account of Independence Day.

The RSI on the Daily Chart stands at 55.3610 and it remains neutral with no bullish or bearish divergences or any failure swings. The Daily MACD is bearish as it continues to trade below its signal line.

On the derivative front, NIFTY August futures have added over 12.75 lakh shares or 9.92% in open interest. This is relatively a big addition in open interest given the short trading range that we have had yesterday.

The pattern analysis continues to show the markets continuing with its pullback within the broadening formation. Given the OI addition during the pullback, the Markets may continue to display some more strength however volumes continue to remain the grey area. Given this character of the  Markets, the Markets may see some more advance but at the same time profit taking from higher levels just cannot be ruled out any time.

Overall, it is required to approach the markets with caution. The relatively lower volumes make any good pullbacks susceptible to profit taking from higher levels and this is what we require to guard ourselves against. Given this, it is advised to continue to approach the markets with cautious outlook while remaining heavily stock specific so far as purchases are concerned. 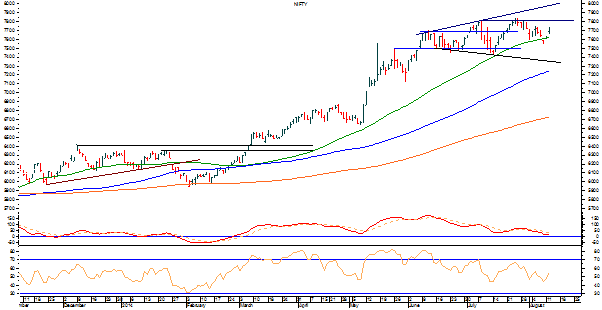 The RSI—Relative Strength Index on the Daily Chart is 54.6491 and it is neutral as it shows no bullish or bearish divergence or any kind of failure swing. The Daily MACD continues to remain bearish as it trades below its signal line.

On the derivative front, the NIFTY August futures have added over 3.43 lakh shares or 2.74% in Open Interest. This shows some more addition of fresh longs in the system.

Continuing with the pattern analysis, the Markets have seen a decent technical pullback after breaching its 50-DMA, but not breaching its filter. While doing so, the pullback has been witnessed with relatively lower volumes. The Markets may see some consolidation again from these levels while remaining in the broadening formation on the Daily Charts.

All and all, we continue to advice on similar lines as that of yesterday. Any pullbacks witnessed should be utilized more on booking and protecting profits. More emphasis should be laid on protecting profits at higher levels than making new purchases which should be limited and extremely selective. While preserving liquidity, cautious optimism is continued to be advised. 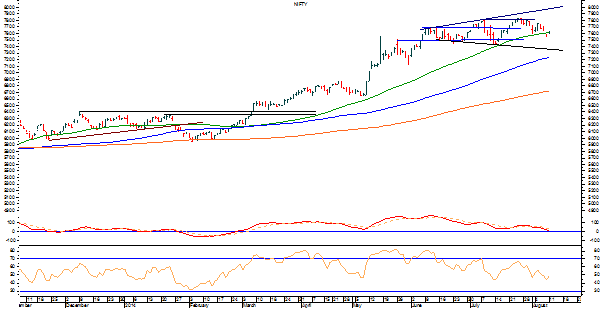 The Markets have pullback after remaining “within” the filters of its 50-DMA and have avoided a breach as of now. Today, expect the Markets to open on a positive note once again and trade in positive at least in the initial trade. Volumes would remain critical as the technical pullbacks require volume to sustain. There are chances that the Markets see some profit taking at higher levels. With today’s opening, the “gap” that was created two days back would be filled up.

The RSI—Relative Strength Index on the Daily Chart is 48.4781 and it is neutral as it shows no bullish or bearish divergence or any failure swing. The Daily MACD continues to remain bearish as it trades below its signal line.

On the derivative front, the NIFTY August futures have added near 3.12 lakh shares or 2.56% in Open Interest which signifies some fresh longs have been initiated yesterday.

Going by the pattern analysis, the Markets still continues to remaining in overall Broadening formation. However, what we saw yesterday and what we will see today would be technical pullbacks and the levels of 50-DMA would continue to hold as support as it has not been broken as yet. However, the Markets are not completely out of woods and it would be critically important to have volumes for the technical pullbacks to sustain. The possibility of the profit taking coming in again from higher levels just cannot be ruled out.

Overall, once again a positive and stable opening is set to happen and it would be critically important to see if the Markets capitalize on this opening. Any strong up move that we witness should be utilized to book and protect profits at higher levels. Fresh purchases may be made but should be limited and more emphasis should be laid on protecting profits. Sectoral stock specific out performance would continue. Overall, cautious optimism is advised for today. On the derivative front, NIFTY August futures have shed over 8.89 lakh shares or 6.79% in Open Interest. The reduction in open interest along with the fall clearly indicates unwinding of open long positions in the Markets.

Going by the pattern analysis, the Markets continues to remain in overall reversal pattern. The Friday’s fall has seen a gap being created which might get filled up in today’s positive trade. However, this pattern, read along with lead indicators and further read along with F&O data tilts the bias towards downside.

All and all, good stable positive opening is expected and we might see a technical pullback rally to day, at least in the initial trade. This up move should be utilized in protecting profits on existing positions and fresh purchases should be made highly selectively. While protecting positions at higher levels and maintaining moderate leverage, positive caution is advised for today.