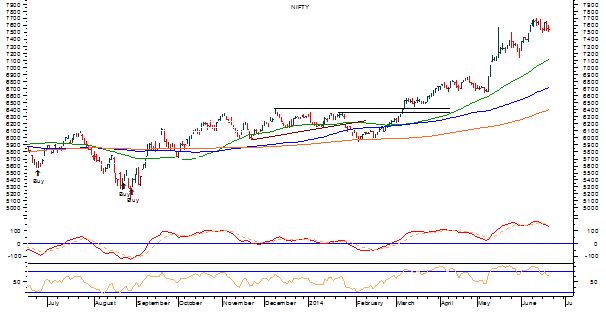 The Markets are again slated to open on a flat to mildly positive note and look for directions. The analysis would continue to remain more or less on yesterday’s lines and the bias certainly remains on the corrective side. It is likely that the Markets show some strength in the first part of the session and again some correction sets in as me move ahead in the session. Volatility shall continue to remain ingrained in the Markets.

The lead indicators continue to point towards corrective bias. The RSI—Relative Strength Index on the Daily Chart is 61.7448 and it has reached its lowest value in last 14-days which is bearish. Further RSI has formed a fresh 14-day low wherein NIFTY has not and this is Bearish Divergence. The Daily MACD is bearish as it trades below its signal line.

On the derivative front, NIFTY June futures have added nominal 85,700 shares or 0.61% in Open Interest. No major build up of positions were seen on either side in yesterday’s session.

As per pattern analysis, as we have often repeated in our previous editions of Daily Market Trend Guide, there has been temporary top formation at 7700.05 levels and until this levels are breach on the upside, the Markets would continue to remain subjected such consolidation / corrective activities. The bias is further tilted towards corrective activities as suggested by the lead indicators.

All and all, the Markets trade in a capped trading range and are continuing to consolidate with corrective bias. Investors are advised to continue to remain very moderate on their exposures which should remain limited to defensives. While remaining ultra selective on the fresh purchases, very cautious outlook is advised for today. 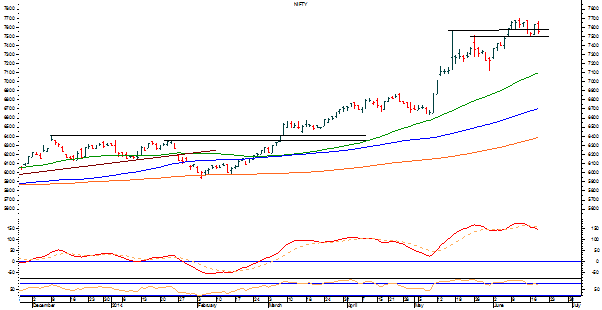 Today’s analysis would remain on similar lines as the Markets are expected to open with minor gains but the session is very much likely to remain absolutely volatile with a corrective bias. The Markets may open near its intraday resistance point and there are chances that it comes off from day’s high as we go ahead in the session. Even if the gains are sustained, the corrective bias would remain as suggested by technical factors and F&O data.

The lead indicators continue to suggest corrective bias in the Markets. The RSI—Relative Strength Index on the Daily Chart is 63.2951 and it has just crossed below its overbought area from a topping formation. This is bearish. Also, RSI has formed its lowest value in last 14-days which is bearish as well. Further, the RSI has set a fresh 14-day low whereas NIFTY has not yet and this is clear Bearish Divergence. The Daily MACD too remains bearish as it trades below its signal line.

On the derivative front, the NIFTY June futures have continued to shed over 6382 lakh shares or 4.61% in Open Interest. This is a clear indication that the Markets have witnessed offloading from higher levels.

Going by the pattern analysis, the levels of 7700 continue to remain a immediate top for the Markets. The Markets may correct or consolidate in a broad range but sustainable up move shall occur only after it moves past this level. Further with the range remaining wider than normal, this will also induce volatility in the Markets. The bias remains towards some immediate weakness as suggested by technical indicators and the F&O data as detailed above.

All and all, under given circumstances, it is strongly advised that any fresh purchases should not only be on highly selective basis, but should be restricted to defensives and high beta stocks should be avoided. It is continued to be advised that the overall exposure in the Markets should be kept moderate. While protecting profits very vigilantly at higher levels, cautious outlook is advised for today.

Expect the Markets to open on a flat note and look for directions again. The Markets saw a massive short covering yesterday and have again entered the "overbought" territory. For today, the levels of 7655 and 7670 would act as immediate resistance and the supports would exist much lower at 7550 and 7510 levels.

Today's session is also expected to have volatility ingrained in the Markets. However, with the Markets being again technically Overbought with a bearish divergence on Daily Charts, it is continued to be advised to remain very moderately leveraged in the Markets and over exposure should be avoided. Some sectoral out performance would be seen but still any fresh purchases should be made selectively. Overall, continuance of extremely cautious outlook is advised for today.

Today's analysis would remain on similar lines that of yesterday. The Markets are expected to open modestly lower and are likely to continue to witness the corrective activities. The levels of 7574 and 7610 would act as resistance and the levels of 7475 and 7420 would act as immediate supports. The RSI remains neutral and the MACD has reported a negative crossover and trades below its signal line which is bearish. Markets are also likely to react to the worse than expected WPI and Core Inflation data.

Given the above and going by the pattern analysis, it is best advised to continue to refrain from making fresh purchases. Stock specific action is also likely as some sectoral out performance would be seen. While continuing to remain light on positions, continuance of cautious outlook is advised for today. 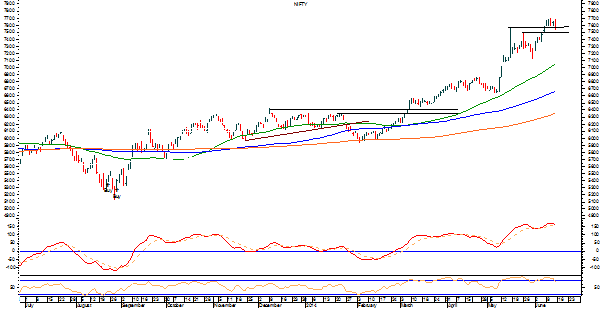 As we had analysed in one of our previous editions of Daily Market Trend Guide, the levels of 7700.05 have not become a temporary top for the Markets. Today, expect the Markets to open on a lower note and continue with its corrective activities, at least in the initial trade. The Markets are most likely to see continuing correction and the intraday trajectory would continue to remain important for the Markets.

The RSI—Relative Strength Index on the Daily Chart is 66.3606 and it remains neutral as it shows no bullish or bearish divergence on the Daily Charts. However, it has moved below its overbought zone and it is bearish. The Daily MACD continues to trade above its signal line, but it is moving towards reporting a bearish crossover. On the Candles, An engulfing bearish line occurred (where a black candle's real body completely contains the previous white candle's real body).  The engulfing bearish pattern is bearish during an uptrend (which appears to be the case with NIFTY).  It then signifies that the momentum may be shifting from the bulls to the bears.

On the derivative front, the NIFTY June Futures have shed over 15.58 lakh shares or 9.34% in Open Interest. This is an extremely clear indication that heavy offloading / unwinding of positions have occurred in the Markets on Friday.

Going by the pattern analysis, the Market shave formed a potential top at 7700.05 and it is showing a corrective trend. This corrective trend is likely to continue wit the Markets finding first supports near 7430-7450 levels. We have had global events like Iraq to discuss but the pattern analysis clearly indicated that such correction had been long overdue and imminent from quite some time. Any sustainable up move shall occur only after Markets moves past its immediate top.

All and all, given this scenario, the Markets are likely to continue with their corrective activity, at least in the initial trade.  While making fresh purchases, it is best advised to stick to defensives and keep vigilantly protecting profits at higher levels. While maintaining extremely stock specific and selective approach, cautious outlook is advised for today.