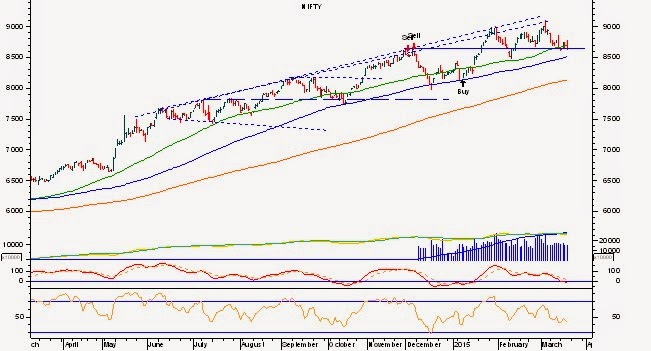 The RSI—Relative Strength Index on the Daily Chart is 43.6483 and it continues to remain neutral while showing no bullish or bearish divergence or any failure swing. The Daily MACD remains bearish trading below its signal line.

On the derivative front, the NIFTY March futures have shed over 2.86 shares in Open Interest. This singular figure, with the expiry week beginning from Monday will be of little help. The NIFTY PCR stands at 0.87 as against 0.89. At this juncture, we would like to point out one important thing. Some suspicious and invisible activities are being observed in the Markets. In all of the last three session, both FIIs and DIIs have remained net buyers to a respectable extent in the range of 1200-1500 crores. There is virtually no data available to show distinctly who the sellers are who have been selling of in the Markets in a very predictable and similar fashion.

Coming to pattern analysis, the Markets have therefore tested its support zone of 8620-8660 levels once gain. As mentioned earlier, it would be crucially important for the Markets to not to breach this levels and its filter in order to avoid some more weakness. If it manages to stay above 8640-8660 range, it would continue to remain in ranged consolidation.

Overall, with some artificial activities observed in last three trading sessions, there are chances that the Markets may slightly disobey and disregard technicals. However, with all external news flow intact, there are chances that the Markets may not see lenient correction and continue to remain in a range bound consolidation. However, while avoiding significant fresh exposure in the Markets, cautious outlook is advised for the day.

MARKET TREND FOR THURSDAY, MARCH 19, 2015
The Markets are to positively react to the FOMC announcements coming in wherein the rate hike in immediate future, i.e. April seems to be unlikely. Reacting to this, Markets are likely to see a decently positive opening. With such decently positive opening, the support zone of 8620-8660 would continue to remain valid. However, it would be important to see if the Markets maintains these gains and capitalizes on it later.

The RSI—Relative Strength Index on the Daily Chart is 46.3906 and it continues to remain neutral as it shows no bullish or bearish divergence or any failure swings. The Daily MACD remains bearish trading below its signal line.

On the derivative front, the NIFTY March futures have shed further over 7.43 lakh shares or 3.08% in Open Interest. This signifies some more unwinding of positions. The NIFTY PCR stands at 0.89 as against 0.91 a day earlier.

Coming to pattern analysis, the decently positive opening will keep the support zone of 8620-8660 valid as of now. Also, this will keep the Markets trading comfortably above all of its three moving averages. However, this will also continue to keep the Markets in the overall broad range of consolidation that it has been trading in. In order to continue with its up move, it will have to move past the levels of 8925 with good amount of participation and volumes in order to keep the original trend intact. Currently, the intermediate trend of the Markets remains that of consolidation.

Overall, Markets are all likely to see the positive and nearly gap up opening today. At the same time, it would be necessary for the Markets to maintain those gains and capitalize on it as well. Though this would still keep the Markets in the overall consolidation zone, selective purchases may be made. While keeping a vigilant eye on profits, positive outlook is advised for the day.

The RSI—Relative Strength Index on the Daily Chart is 48.4533 and it remains neutral as it shows no bullish or bearish divergence or any failure swings. The Daily MACD continues to remain bearish trading below its signal line.

On the derivative front, the NIFTY March futures have shed over 8.54 lakh shares or 3.42% in Open Interest. Though this very distinctly shows short covering from lower levels, and it can also be interpreted as validating the support zone as well. NIFTY PCR stands at 0.91.

All and all, though the Markets have managed to remain above its important support levels, it is not completely out of the woods as yet. It needs to move past the levels of 8920 and remain above that to resume its up move. Until that happens it would continue to remain in a very broad trading range and consolidation zone. While continuing to keep overall exposure at modest levels, selective approach is advised for the day.

Likewise, the market in spite of all positive clues, failed to move beyond  8849.75 intraday  and encountered heavy selling pressure, but the all important expected  support of 8644 ( Pattern ) was not breached . The intraday low was 8631, which was not much below the expected range of 8658 – 8677.

The resistance was expected as stated, but the selling bout was much sharper then expected . What was expected in a few trading day, was witnessed in a day, and the market  which saw heavy volatility of 218 points Nifty, gave a tall intraday bar on Daily High Low charts of Nifty touch both resistances and supports in a day.

Pattern Analysis indicate that for today and rest of the week, the  range of 8644 ( Pattern ) and 8665 (  50 Day Simple Moving Average) as of today, has become very decisive range.

On Candle charts, the engulfing bearish pattern occurs during a downtrend it may be a last engulfing bottom which indicates a bullish reversal.  The test to see if this is the case is if the next candle closes above the bottom the current (black) candle's real body. The MACD is bearish since it is trading below its signal line.The MACD crossed below its signal line 4 trading days ago. The RSI has just reached its lowest value in the last 14 periods.  This is bearish and its is a Failure Swing.

This technical analysis   indicates that the markets are   still not out of woods. Expect  bouts of selling at every rise.

Today markets are  expected to open on a flat to weak note.
Today,  If the market opens above this range and manages to hang on above this range,  this range will act as important support levels for the day. On down side, if the Markets breach these levels,  it should find support at  8560 – 8535 range as indicated by Pattern Analysis.
Until the markets move above these decisive and all important  range, weakness is expected and this is applicable today and for  the rest of the week.