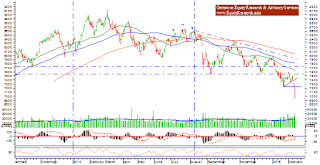 MARKET TREND FOR FRIDAY, FEBRUARY 12, 2016
Speaking purely on technical terms, what we witness yesterday was a “selling excess” or “selling extreme” which often accompanies the final phases of a sharp downsides. Such action on the Charts is one of the major attempts to find a bottom for the immediate short term. Today, we are likely to see a decently positive opening and though it can be merely on account of short covering, we are likely to see some relief rally in the first half of the session.
However, as usual, in order to such formations to sustain, it would be extremely important of the  Markets to maintain its opening gains.

The RSI—Relative Strength Index on the Daily Chart is 27.7804 and it has reached its lowest value in last 14-days which is bearish. However, it now trades in the “oversold” territory. The Daily MACD is bearish as it trades below is signal line.

On the derivative front, the NIFTY February futures have added over 10.90 lakh shares 5.85% in Open Interest. This indicates massive addition of fresh short positions in the system. The NIFTY PCR stands at 0.78 as against 0.82.

Coming to pattern analysis, the Markets held its original support level of 7540 that it broke
on its way down as sacrosanct and while pulling back resisted to it twice. Since resisting it came off heavily and went on to make fresh 52-week lows in recent sessions. Yesterday, it went on to breach its recent 52-week low of 7240 and saw a sharp decline the moment the levels were breached. It formed it slow well below that and below the psychological 7000-mark. Having said this, as mentioned above, there are chances that the Markets have formed a pattern known as “selling extreme” on its charts. This is a major attempt to find a bottom for the short term. If the possible positive opening in the Markets are sustained, it is all likely that the Markets have formed its bottom for the immediate short term and some technical relief rally cannot be ruled out.

All and all, as mentioned above, even if we witness a rally, initially it is likely to be just on back of short covering as profit booking in short positions is likely to be witnessed. It is advised to refrain from fresh shorting at any levels. The technical pullback, if any, is likely to lead the Markets around 7240 levels, again at which we will see some pattern area formation. Until any pattern area formation occurs, it is best advised to keep the exposure very limited and adopt heavily cautious outlook on the Markets. 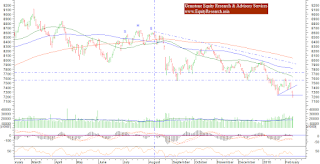 MARKET TREND FOR THURSDAY, FEBRUARY 11, 2016
Today, the Markets are once again likely to open on a lower note and look for directions. The Markets have breached its important support levels of 7240 yesterday and have made fresh lows. These levels of 7240-7250 will now act as resistance for the immediate short term. Today, there are chances that the Markets may make fresh 52-week lows once again but at the same time, it will remain prone to short covering from lower levels, especially in the second half of the session.

The RSI—Relative Strength Index on the Daily charts is 35.1089 and it shows no failure swings. However, the NIFTY has made a fresh 14-day low while RSI has not yet and this is Bullish Divergence. The Daily MACD has reported a bearish crossover and it now trades below its signal line. On the Candles, a falling window has occurred again. Such candles often signal continuation of bearish tone for the short term irrespective of intermittent pullbacks.

On the derivative front, the NIFTY February future have added over 1.04 lakh shares or 0.56% in Open Interest. The NIFTY PCR has remain unchanged at 0.82.

Overall, the Markets are set to open lower, but we may see some likely pullback as we go ahead in the session. However, with the Markets breaching some important levels, it is likely to continue to wear a bearish undertone.  There are chances that we see intermittent pullbacks and shorts at lower levels should be avoided. Dips should be utilized to make very modest purchases. More liquidity should be maintained by keeping exposures at very limited levels while adopting a cautious outlook on the Markets. 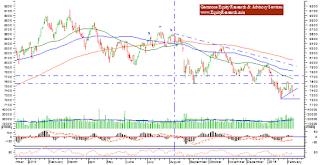 MARKET TREND FOR WEDNESDAY, FEBRUARY 10, 2016
The Markets faces a very critical session today. It is likely to open on a gap down note once again. Today’s likely negative opening will see the Markets testing its 52-week lows of 7241 and it would be very critical to see the behavior of the Markets vis-à-vis this level. It would be very important for the Markets to attempt to find support around this level and any significant breach will induce more weakness into the Markets. The intraday trajectory, therefore, shall be very important to watch out for today.

The RSI—Relative Strength Index on the Daily Chart is 38.3466 and it remains neutral as it shows no bullish or bearish divergence or any failure swings. The Daily MACD still continues to trade bullish as it trades above its signal line.

On the derivative front, the NIFTY February futures have 7.41 lakh shares or 3.84% in Open Positions. This continues to indicate unwinding / reduction of positions from higher levels. Also, the NIFTY PCR stands at 0.82 as against 0.79.

Coming to pattern analysis, the Markets have become significantly bearish after it first breached its triple bottom support of 7540 from a descending triangle formation. Since then, the levels of 7540 have been acting as a significant resistance for the Markets in its every attempt to pullback. The Markets have retraced over 200-points twice after attempting to move past that level again in recent past. Having said this, the Markets are likely to test its 52-week low  of 7241 and it would be critically important to see if the Markets are able to keep its head above that. As mentioned earlier, any significant breach below 7241 will see the Markets heading lower.

Overall, it becomes important for the Markets to try and improve as we go ahead in the session given the expected gap down opening. It will have to keep itself above 7240 levels in order to avoid any more weakness from creeping in. It is advised to refrain from taking any significant exposure on either side and adopt heavy caution in the Markets while maintaining adequate amount of liquidity in the Markets to guard positions. Major exposures on either side should be avoided. 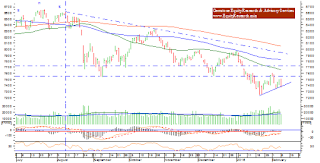 MARKET TREND FOR TUESDAY, FEBRUARY 09, 2016
The Markets once again reacted from the 7500-7520 levels yesterday and saw a sharp paring of gains from higher levels. Today as well, we can fairly expect the Markets to open on a modestly weaker note and look for directions. It would be critical to see the intraday trajectory that the Markets form post opening as it would decide if the Markets are holding on to the short term trend line that it has been taking support on. If the Markets breach this, then some more short term weakness cannot be ruled out.

The RSI—Relative Strength Index on the Daily Chart is 42.2520 and it remains neutral as it shows no bullish or bearish divergence or any failure swings. The Daily MACD still continues to remain bullish as it trades above its signal line.

On the derivative front, the NIFTY  February series have added over 8.10 lakh shares or 4.39% in Open Interest. This signifies creation / addition of large amount of short positions in the system.

Coming to pattern analysis, as mentioned in our previous editions, the Markets have been making attempts to find a  bottom for itself. Though a temporary bottom around 7250 levels have been made and Markets did show some pullback twice near those levels, it has not confirmed this bottom so far. With the volatile oscillation of Markets in a broad range continuing, the Markets have not yet established any firm bottom as of now. The chances of the Markets testing the levels of 7250 again and breaching it as well remain slim in the near future but we have to remain at elevated levels of caution as there has been no confirmation of bottom so far. However, very less amount of delivery based selling and sharp upsurge in the VIX  and large amount of shorts that are seen in the system can show some mild chances of the Markets  holding on to its current levels. It would be critical to see if the Markets are able to keep its head above 7250 levels to avoid any major fresh weakness from creeping in again.

All and all, as mentioned above, the intraday trajectory that the Markets form would be critical to watch out for. With the levels of shorts that are seen in the system, we reiterate to avoid any fresh shorts and use any such sharp dip to make fresh purchases. However, such purchase should be kept on very selective basis and the quantum of exposure should be kept limited. Overall, while maintaining liquidity, cautious outlook should be continued in the Markets today. 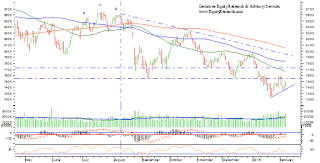 MARKET TREND FOR MONDAY, February 8, 2016
Markets have ended near the high point of the day on Friday and speaking purely on technical grounds, it is likely to open bit higher and continue with its up move. Major Asian Markets such as China, Hong Kong, Singapore and Taiwan are shut today. Today, we can expect our Markets to open on a quiet note and look for directions. It has attempted to find base once again and expected have not made any fresh lows. Again while pulling back, the logical target and resistance levels both should be 7540 and it should be the important levels to watch out for.

On the derivative front, the NIFTY February futures have shed over 4.20 lakh shsares or 2.22% in Open Interest. This makes further evident the fact that the rally that we saw on Friday remained largely on back of short covering.

Coming to pattern analysis, the Markets as done often in our previous editions, we need to point out few things. W e had pointed out that the Markets are not likely to make fresh low even if it resisted to 7540 levels. The Markets have held out this reading so far and have make a higher bottom 7350 as indicated with a small rising trend line and have attempted to move back towards 7540. However, at the same time, it becomes important to note that by doing this, the Markets have just, for once more time, have attempted to form a bottom but it is yet to give any definite confirmation for the same. So, once again, the levels of 7540 remains critical levels to watch out for and the Markets will have to move past this level and sustain above this to confirm a bottom for the immediate short term.

All and all, with the Markets yet to confirm its bottom, it continues to remain vulnerable to resistance at 7540-7600 range and also remain vulnerable to sell-offs from higher levels. Given this fact, while once should continue to make quality stock specific purchases; it is also advised that short term profits need to be vigilantly protected at higher levels. While adopting stock specific approach, cautious optimism is advised for today.