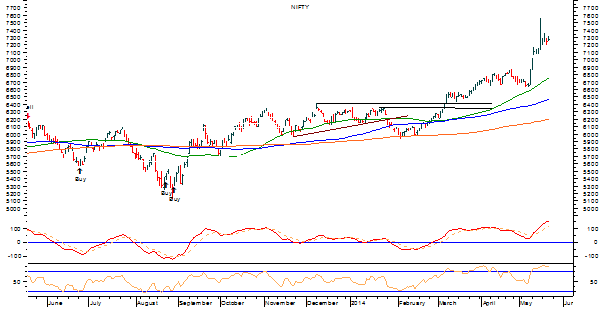 MARKET TREND FOR TODAY
Today’s analysis remains more or less similar on yesterday’s lines. The Markets are expected to open on a flat to modestly positive note and look for directions. Given the local technicals on the Charts, the F&O data and overall cues, the Markets are expected to continue with its corrective activities and we can witness paring of gains, if any. The intraday trajectory would continue to remain important and volumes too would be critical.

For today, the levels of 7310 and 7345 are immediate resistance levels for the Markets today. The supports exist much lower at 7210 and 7075 levels on the down side.

The lead indicators too show some signs of tiredness. The RSI—Relative Strength Index on the Daily Charts is 79.4273 and it does not show any failure swings. It continues to trade in “extremely overbought” territory. Also, the NIFTY has marked a new 14-period high but the RSI has not yet and this is a clear “Bearish Divergence”.

On the derivative front, the NIFTY May futures have shed nearly 9.79 lakh shares or 4.43% in open interest. This very clearly indicates that there has been shedding of long / unwinding of positions from yesterday’s high levels while the Markets pared its gains.

On the charts, going by pattern analysis, the Markets have consolidated till today after forming a very high bar on the Daily High Low Charts and the bias has remained on the downside as the Market have shown reduction in open interest. Further, there would be no sustainable up move as the Markets continue to trade in “extremely overbought” territory and any up move shall continue to make the markets unhealthy and pose risks of equally imminent sharp correction at some point of time.

All and all, the Markets are consolidating and unless it corrects itself a bit and lead indicators suggest, we are exposed to equally sharp correction which looks imminent and long overdue. The Markets cannot continue to rise in the manner in which they are rising even if they are supported by very strong inflows. Such meteoric rise even in the overbought zone certainly makes the markets quite unhealthy susceptible to a sharp correction. In such a scenario, we continue to reiterate advice of remaining moderate on the overall exposure and maintain high degree of caution for today. 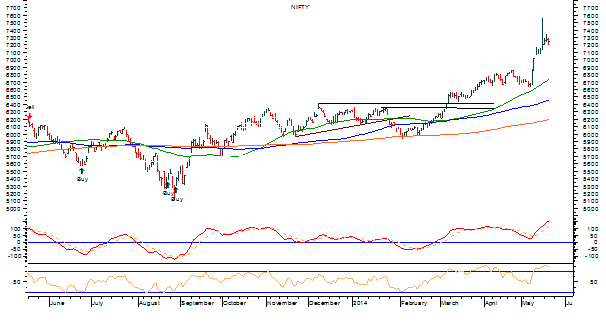 The RSI—Relative Strength Index on the Daily Chart is 78..6147 and it is neutral as it shows no bullish or bearish divergences or any failure swings. It however continues to trade in “overbought” territory. The Daily MACD continues to trade above its signal line.

On the derivative front, NIFTY May futures have added nearly 5.03 lakh shares or 2.33% in open interest. This shows some fresh buying done yesterday while the Markets recovered some 50-odd points from its day’s low.

Going by the pattern analysis, the Markets have made a temporary top on May 16th as we have mentioned often in our previous editions and this will continue to act as a immediate top. The Markets would either continue to correct or would continue to consolidate in this broad range with the bias on the downside. This downside bias would persist so long as the Markets continue to trade “overbought”.

Overall, the Markets would see some initial uptick but the possibilities of the consolidation / correction cannot be ruled out. Further with FIIs remaining net sellers in last 2 sessions, this is likely to persist today as well and this may keep the Markets volatile. We continue to reiterate our advice of maintaining very moderate exposures in the Markets while adopting a cautious approach for today. 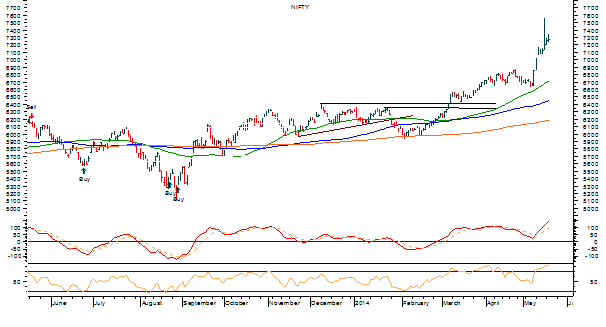 Today, expect the Markets to open and trade modestly positive again in the initial trade. However, the global cues remain weak and given the local technicals, there are fair chances that the Markets continue to consolidate and mildly correct. Some profit taking from higher levels cannot be ruled out baring some sectoral out performance. Intraday trajectory would remain critically important to decide the trend for the day.

The RSI—Relative Strength Index on the Daily Charts is 81.4890 and it has reached its highest value in last 14-days which is bullish. However, it does not show any bullish or bearish divergence and it continues to trade in “extremely overbought” condition.  The Daily MACD continues to trade above its signal line.

On the derivative front, NIFTY May futures have shed over 2.83 lakh shares or 1.30% in Open Interest. This signifies that there has been some shedding of open interest from higher levels yesterday.

Going by the pattern analysis, the Markets have been trading in extremely overbought condition and at any stage, paring of some gains and profit taking just cannot be ruled out. Given the never-ending inflows, even if the Markets continue to rise in this fashion, it is making the rise un healthy in the immediate short term. Going purely by the pattern analysis, some correction / profit taking from these levels remain imminent and overdue.

Overall, Markets have shown some signs of tiredness by way of reduction in OI and this, along with technicals and other factors continue to point towards consolidation continuing in the Markets. However, sectoral out performance in the defensives and low beta stocks is likely to be seen. We continue to reiterate on the advice of maintaining very modest exposures (avoiding over leverage) and maintaining high degree of caution for today. 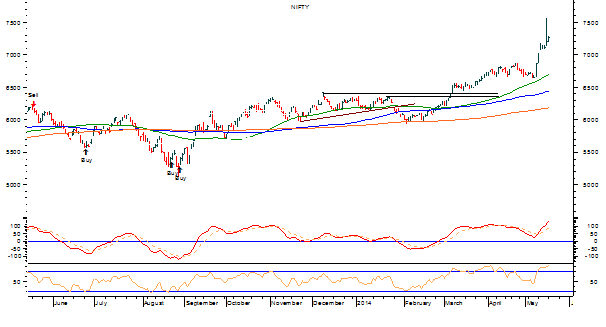 Today’s analysis for the Markets remain more or less on similar lines that of yesterday. The Markets are now trading in “extremely overbought” condition. The Markets are likely to open on a modestly positive note and see some up tick in the initial trade but there are great chances that the volatility shall persist and the Markets continue to see consolidation or imminent profit taking.

The RSI—Relative Strength on the Daily Chart is 81.1506 and it has reached its highest value in last 14-period which is bullish. However, it does not show any bullish or bearish divergence and it continues to remain in “extremely overbought condition”. The Daily MACD continues to trade above its signal line.

On the derivative front, NIFTY May futures have added 3.52 lakh shares or 1.64% in total open interest. This signifies that no major offloading was seen. Minor fresh longs might have been added. NIFTY PCR rose from 0.69 to 0.72 yesterday.

All and all, the Markets are now at dizzying levels and since liquidity is pushing it, it generally tends to disregard the technical factors. However, we would not advice to take any blanket long positions at these levels. Any purchases, if any, should be making in the defensives. Also while continuing to over leverage and take extended exposures, it should be kept moderate while continuing to maintain extreme caution in the Markets.