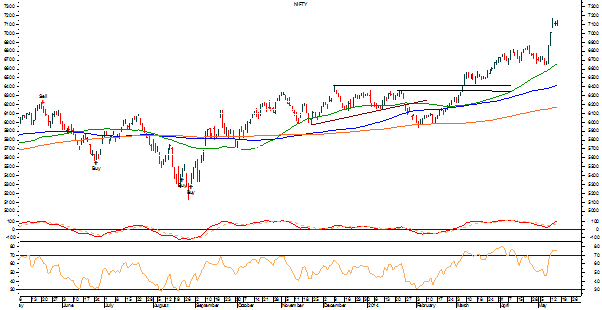 After forming a lifetime high of 7172, the Markets have been severely consolidating since last two sessions. Today, we can expect a modestly negative start to the Markets but given the election results today, the volatility is expected to remain at its extremely today with the Markets likely to swing in both directions due to highly speculative reasons.

The RSI—Relative Strength Index on the Daily Chart is 76.6909 and it has reached its highest levels in last 14-days which is bullish. However it continues to trade in “OVERBOUGHT” territory and it does not show any bullish or bearish divergence either. The Daily MACD continues to trade above its signal line.

On the derivative front, the NIFTY May futures have another 9.13 lakh shares or 5.37% in Open Interest. This signifies creation of fresh longs in NIFTY Futures. However, there has been net shedding of Open Interest in stocks futures that has been reported across key stocks.

Going only by the pattern analysis, the Markets are trading deeply “Overbought” and some amount of further consolidation or minor profit taking cannot be ruled out, but in fact it is long overdue and imminent. However, give the election results today, all such analysis normally takes a back seat and the Markets normally reacts to such developments in absolutely volatile and wild manner.

Given the elections results today, as mentioned earlier, the Markets are set to witness extreme volatility on either side. It is strongly advised to refrain from taking over leverage and larger exposure in the Markets. Retail investors / traders should wait for the trend of the Markets to get clear and then start taking moderate positions. Overall, high degree of caution should be continued to be exercised for today as well. 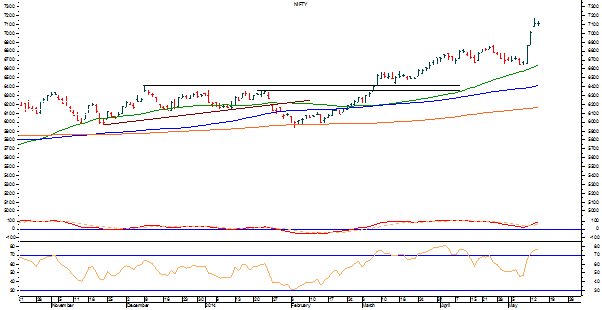 The election results are coming out tomorrow and today as well, the Markets are likely to see a quiet opening and are likely to continue to consolidate at higher levels. Though intraday trajectory would continue to remain critically important the overall analysis continues to remain same as that of yesterday. There are chances that the Markets see some profit booking before the event tomorrow.

The RSI—Relative Strength Index on the Daily Chart is 76.1713 and it has reached its highest level in last 14-days which is bullish. It does not show any bullish or bearish divergence. The Daily MACD remains bullish as it continues to trade above it signal line. On Candles, a spinning top has occurred. This indicates a potential top formation.

On the derivative front, the NIFTY May futures have added another 10.13 lakh shares or 6.33% in Open Interest.

Going by the pattern analysis, the Markets now continue to trade in “Overbought” territory and there are signs of a potential top formation at 7172 levels. Before the election results come out the Markets may either consolidate in a given range with 7172 acting as its potential top OR might see some profit taking ahead of the event.

Overall, we continue with our advice of remaining moderate with the positions. Shorts should be avoided but any up move should be utilized to protect any existing profits. Any fresh positions should be taken moderately and heavy exposures and leverage should be strictly avoided. While maintain moderate exposures, continuance of high degree of caution is advised for today. 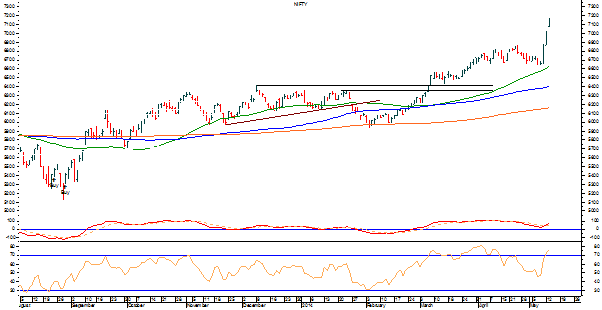 The Markets have closed yesterday after coming off from their intraday highs and therefore might have potentially formed a temporary top at that levels. The Markets may open on a quiet or modestly positive note and move upwards in the initial trade but yesterday’s high level might pose a temporary resistance to the Markets. Though intraday trajectory remains critically important and so are the FII cash inflows, there are chances that the Markets show some sign of profit taking from current levels.

The RSI—Relative Strength Index on the Daily Chart is 73.1713 and it has reached its highest level in last 14-days which is bullish. It does not show any bullish or bearish divergence. The Daily MACD continues to remain bullish as it trades above its signal line.

On the derivative front, the NIFTY May futures have added nearly 10.34 lakh shares or 6.91% in Open Interest. This very clearly signifies that fresh buying in the Markets have continued unabated.

Going by the pattern analysis, the Markets now continue to trade very much in “OVERBOUGHT” territory. Also, the last three trading sessions have resulted in gains of over 450-NIFTY points and there are bright chances that the Markets see some correction / profit taking setting in. This profit taking may not be across the Markets but certainly it can remain sector specific. Some sectors which have run up too hard might witness some profit taking at higher levels.

All and all, nearing actually election results, the volatility in the Markets is expected to remain and even increase. We continue to reiterate to use this fantastic up move to book profits on long positions wherever possible. Shorts, however, should be avoided and any fresh position should be taken extremely selectively. We continue to advice to remain moderate on market exposure and maintain high degree of caution in the Markets. 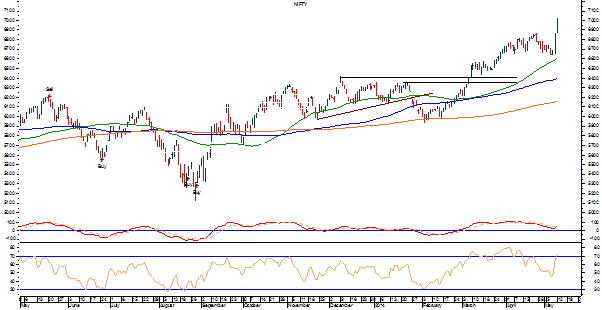 Even though the markets have again become overbought, it will continue to witness the volatile upsurge, though now on little dangerous and unhealthy manner. The reason for this is the expected NDA victory from all the exit polls (though exit polls have been miserably wrong in 2004 and 2009). The Markets are likely to react to this and on the other hand it would also react to the IIP and CPI numbers which are not at all encouraging.

For today, the Markets would continue to trade in uncharted territory and therefore the possible resistance levels can be 7050 and 7065 and the supports would exist very low at 6905 and 6850 levels.

The RSI—Relative Strength Index on the Daily Chart is 72.7310 and it has reached its highest value in last 14-days which is Bullish. On the other hand, it has also entered the “overbought” territory. It does not show any bullish or bearish divergence. The Daily MACD has now reported a positive crossover and it trades above its signal line.

On the derivative front, the NIFTY May futures have added over 4.32 lakh shares or 2.98% in Open Interest. This shows that fresh buying continued. The Market breadth however remained negative slightly favoring the declines.

Going only by the pattern analysis, if the Markets continue to surge upwards, it would not get unhealthy and dangerous by all means. Agreed that the Markets reacting to the positive electoral sentiments and this is backed by massive cash inflows but the Markets need to consolidate a bit before resuming its up move. ALSO, the markets should and will take into consideration the IIP and CPI data, which is not encouraging at all, if not today than incoming sessions. This greatly reduces any immediate rate cut by RBI as inflation has continued to remain high.

All and all, going by this, even if the Markets now continue with their up moves, we strongly recommend that exposures should be curtailed to very moderate levels. Any fresh purchases, if any should be curtailed to defensives as some volatile and intermittent corrections just cannot be ruled out. Overall, while remaining very moderate on exposures, very high degree of caution is advised for today.