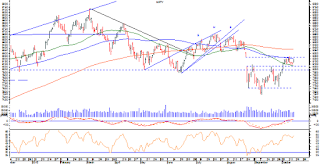 The RSI—Relative Strength Index on the Daily Chart is 58.7669 and it remains neutral as it does not show any bullish or bearish divergence or any failure swings. The Daily MACD continues to remain bullish while trading above its signal line.

On the derivative front, the NIFTY October futures have added over 3.38 lakh shares or 1.71% in Open Interest. This shows the continuing display of inherent strength of the Markets even while consolidating. The NIFTY PCR stands unchanged at 1.00

All and all, the Markets still continue to oscillate in a range and continue to remain in consolidation. Fresh up moves shall occur only beyond 8230-8240 levels and until that happens we will continue to see the Markets oscillating in a broad range. Today, with the Markets expected to open near its resistance levels, it would be important to see the intraday trajectory that the Markets forms because at these levels it still remain vulnerable to profit taking. Overall, while maintaining liquidity, selective and stock specific approach is advised with cautious outlook for the day. 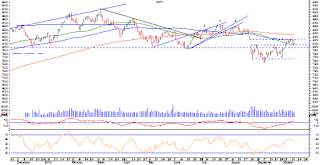 MARKET TREND FOR THURSDAY, OCTOBER 15, 2015
Though the Markets have held on to its 50-DMA levels at Close, they are not so comfortably out of the woods as yet. The consolidation is likely to continue and following this, the Markets are set to see a modestly positive opening today. However, post opening, as always, it would be critical to see if the Markets attempts to capitalize and build on its positive opening or ends up consolidating again by paring gains during the day.

The RSI—Relative Strength Index on the Daily Chart is 55.0436 and it remains neutral as it shows no bullish or bearish divergence or any failure swing. The Daily MACD continues to remain bullish as it trades above its signal line.

On the derivative front, the NIFTY October futures have shed over 13.04 lakh shares or 6.19% in Open Interest. This is clear offloading / unwinding of positions that appear to have happened. This is likely and enough to cause the Markets to consolidate for some more time to come. The NIFTY PCR stands at 1.00.

While having a look at pattern analysis, the Markets continue to trade in a range above its 50-DMA and one of the pattern resistances it broke on the upside, and between 100-DMA and the upper end of the “gap” which it created in the first week of September. The Markets have been oscillating in this broad range for a while now. It is important to note that any fresh up move shall take place only above the levels of 8230. Any movement in between this would be mere oscillations. Any breach on the downside may cause the Markets to retest its earlier pattern supports.

All and all, while the Markets are struggling to confirm its reversal that it has attempted over this month, we advise to keep the overall exposure limited in this Markets which are currently devoid of any directional bias. The Markets may test its important pattern supports once again. However, we also continue to reiterate to refrain from shorts as Markets have multiple supports on the downside and use downsides to make moderate purchases on selective basis. Overall, while remaining light on positions, cautious outlook should be continued on the Markets. 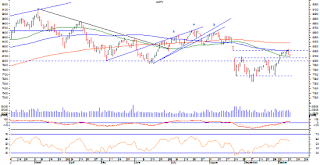 MARKET TREND FOR WEDNESDAY, OCTOBER 14, 2015
Markets pose themselves at a critical juncture and they are slated once again to open on a modestly negative note. The Markets are likely to test its 50-DMA levels and it would be extremely important to see if they manage to trade above this. Any slippage below this will have the Markets testing yet another pattern support on the Daily Charts. The intraday trajectory that the Markets form will continue to play crucial role along with the volumes.

The RSI—Relative Strength Index on the Daily Chart is 56.6217 and it remains neutral as it shows no bullish or bearish divergence or failure swings. The Daily MACD remains bullish as it continues to trade above its signal line.

On the derivative front, the NIFTY October futures have shed over 7.58 lakh shares or 3.47% in Open Interest. This leaves little gap in interpretation as the Markets have seen most of the reduction in OI in the last minute of the spurt. This translates into sharp short covering from the lows of yesterday and on the same breadth, it leaves some gap for further unwinding as well. The NIFTY PCR stands at 1.01 today.

On the pattern analysis front, the Markets have resisted to its 100-DMA and the upper end of the “gap” that it created in the first week or September. On the downside, it has two pattern supports which are important to watch for. The first would be the zone of 50-DMA, i.e. 8085-8060 levels and if these are breached, the important pattern support that exist is 8000-levels. The volumes have been lower relatively and the Markets are likely to test is 50-DMA today if the weakness post opening persists for some more time. As mentioned earlier, it would be critically important for the Markets to find base early and resist any weakness from thereon.

Overall, the Markets are showing signs of some intermediate weakness and there are chances that we continue to see the Markets once again in consolidation phase. As mentioned in our previous edition, a sustainable up move shall occur only after the Markets moves past its 100-DMA and the pattern resistance thereafter. However, so long as it continues to trade above the mentioned pattern supports, any downsides should be continued to be utilized to make limited selective purchases. While there is no structural breach on the Charts, shorts should be strictly avoided while maintaining a cautious outlook on the Markets. 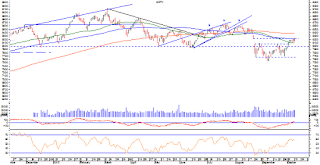 MARKET TREND FOR TUESDAY, OCTOBER 13, 2015
The Markets have continued to resist to its congestion zone yesterday and today as well this zone will continue to pose as important resistance levels for the Markets. This keeps the analysis more or less on similar lines again as we can expect the Markets to open on a flat note today as well and look for directions and react to macro data which came out yesterday which remained somewhat better than expected. In any case, the congestion zone between the 50-DMA and the 100-DMA / upper band of the gap will continue to remain important pattern resistance.

The RSI—Relative Strength Index on the Daily Chart is 57.3856 and it remains neutral as it shows no bullish or bearish divergence or any failure swings. The Daily MACD continues to remain bullish as it trades above its signal line. On the Candles, and Engulfing Bearish Pattern has occurred. This formation is a potential signs that the Markets may continue to resist to this zone for some more time to come.

On the derivative front, the NIFTY October futures have added over 5.94 lakh shares or 2.80% in Open Interest. This clearly points finger towards addition of short positions in the Markets. The NIFTY PCR stands at 1 as against 1.02 yesterday.
While having a look at pattern analysis, the Markets have been consolidating in a ranged manner after moving past its resistance levels of 8000-8062 levels. The Markets have now resisted to the congestion zone created by the upper end of the “gap” that the Markets created in first week of September and also to the 100-DMA levels that falls just around that. The Markets have been oscillating in  range bound manner in this zone after some 450-odd points of rise in six straight sessions. The Markets would see a sustainable up move once its moves past these levels. Until this happens, we will continue to see the Markets oscillating and consolidating. However, major downsides are unlikely as suggested by overall pattern analysis and as supported by F&O data.

Overall, the Markets are once again set to see a flat opening. The Markets will also continue to oscillate while attempting to move up again towards the upper end of the congestion zone. The F&O data suggests limited downside and therefore we reiterate our advice to make selective purchases on every corrective dip. In the same breadth, since the Markets are yet to move out of the congestion zone, any existing profits may be vigilantly protected at higher levels.