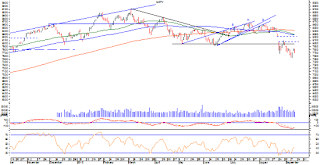 MARKET TREND FOR FRIDAY, SEPTEMBER 11, 2015
We can fairly expect to have a relatively quiet day today. The Markets are expected to open on a quiet note and look for directions. Attempts to a modest up move cannot be ruled out but at the same time, the quantum of caution would increase as we move up wards. With any up move, below 7960-8000 levels the Markets will remain in a broad trading range with corrective bias.

The RSI—Relative Strength Index on the Daily Chart is 40.7964 and it remains neutral as it shows no bullish or bearish divergence or any failure swings. The Daily MACD is bearish as it continues to trade below its signal line. However, it is moving towards attempting a positive crossover.

On the derivative front, the NIFTY September futures have added over 4.73 lakh shares or over 2.13% in Open Interest. This point towards heavy short covering from the low point of the day yesterday and also point towards some fresh buying as well. The NIFTY PCR stands at 0.95 as against 0.94.

Coming to pattern analysis, as we have mentioned in our yesterday’s edition of Daily Market Trend Guide, a gap was created a day before while the Markets opened gap up and ended higher. We had mentioned that that such gap is insignificant as they occur within a formation and often tend to get filled up. Exactly on these expected lines, the Markets filled up that gap as evident on the Daily Chart.  Today, we may open a bit higher and even continue to edge upwards towards its key resistance zone once again. However, we would still continue to trade in a given range with all possibilities of selling pressures from higher levels.

All and all, the Markets may open stable and remain positive today but uncertainty will remain in the air until we move past important global events like US Fed rate decision. Speaking purely on technical grounds, the Markets have attempted to form a base but have shown no signs of confirmation as of today. While keeping this in view, fresh purchases may be made but extremely on selective basis and with very tight protective stops. Overall, continuation of cautious approach is advised for today. 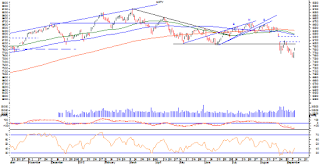 MARKET TREND FOR THURSDAY SEPTEMBER 10, 2015
We had categorically mentioned that the Markets remains exposed to vulnerability of retracements again at higher levels. Keeping in line with this analysis, the Markets are once again set to open on a negative note and trade  gap down in the initial trade. The reason being, the rise that we saw in the last two sessions have purely been on account of short covering and may well established itself as what is known in technical parlance – a dead cat bounce. It would be extremely important to see if the Markets attempt to recover post opening but the bias continues to remain towards sustained weakness.

The RSI—Relative Strength Index on the Daily Chart is 41.7319 and it has reached its highest value in last 14-days which is bullish. Also, the RSI has set a fresh 14-period high whereas the NIFTY has not and this is bullish divergence. The Daily MACD remains bearish as it continues to trade below its signal line.

On the derivative front, the NIFTY September futures have shed over 14.91 lakh shares or 6.28% in Open Interest. This very clearly, and in no unclear terms, indicates heavy short covering in the Markets. The NIFTY PCR stands at 0.94 as against 0.95.

Coming to pattern analysis, the Markets have pulled back nearly 300-odd points from the lows it formed on 7th September. However, post breaking down from the bearish Head and Shoulder formation and further breaking down from its key support zone of 7960-8000 levels, what Markets have shown is just a “technical pullback”. At least this is what it appears. Further to this, if the Markets opens lower as expected and makes no attempt to recover, it would prove that what we saw in last two sessions is merely a dead cat bounce.  It is important to also note that the Markets created a “gap” yesterday, by opening gap up, and ending higher. However, this gap has been created within a formation. They are known as “area gaps” and have least significance and tend to get filled up very easily.

Keeping the overall technical picture in view, the Markets are slated to open lower and most probably are all likely to continue to trade weak. The key would be to see if the Markets recover as we go ahead in the session but the bias remains on the weaker side. Any pullbacks that we now see should be used to make exists as we continue to remain vulnerable to sell-offs at higher levels. Very cautious outlook is advised for the day. 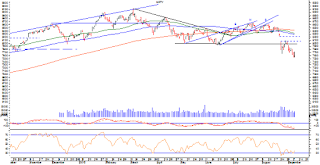 For today, the levels of 7750 and 7835 will act as immediate resistance for the Markets. Supports come in at 7540 levels on the downside.

The RSI—Relative Strength Index on the Daily Chart is 35.8986 and it remains neutral as it shows no failure swings or any bullish or bearish divergence. The Daily MACD continues to remain bearish as it trades below its signal line.

On the derivative front, the NIFTY September futures have added over 1.72 lakh shares or 0.73% in Open Interest. This minor addition of open interest shows that apart from massive short covering that we witnessed yesterday, some modest amount of buying too is seen as well. The NIFTY PCR stands at 0.95.

Coming to pattern analysis, the Markets will continue to advance towards its 7960-8000 resistance zone that we have been mentioning in couple of our previous editions. With today’s gap up opening expected, the Markets will be mid-way so far as approaching this zone is concerned and it will not be anything unusual if the Markets continue to see advances towards these levels. Today’s gap up opening and it subsequent up move towards the key resistance zone will not confirm any bottom formation but it will certainly lay some firm ground work for the Markets to form a solid base at current levels. However, to do so, the Markets will see some retracement and then attempt to move up again forming a higher bottom. Until this happens, we will continue to see a ranged trading with some great amount of volatility ingrained in it.

All and all, the Markets shall open higher today and make attempts for a further up move. It would be critically important for the Markets to maintain the opening gains and build up from there. At higher levels, there are chances that we see some profit taking bouts and this will keep good amount of volatility ingrained in the Markets. More emphasis should be laid on protecting profits at higher levels while keeping the fresh purchases highly selective. 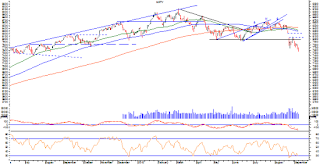 MARKET TREND FOR TUESDAY, SEPTEMBER 08, 2015
Today, we can fairly expect the Markets to open on a modestly positive note and attempt / show some technical pullback. However, it is very important to note that given the weak technical fabric of the Markets, any pullback that we see today, or in immediate short term, will more be attributed to short covering. For the Markets to form solid base and bottom we need buy volumes and this is what it has been missing since last couple of session. With any pullback, the Markets continue to remain vulnerable to sell-off from higher levels.

The RSI—Relative Strength Index on the Daily Chart is 29.3788 and it now once again trades in “oversold” territory. Though it does not show any failure swing, it certainly shows Bullish Divergence as the NIFTY has formed a fresh 14-day low but RSI has not. The Daily MACD continues to remain bearish as it trades below its signal line.
On the derivative front, the NIFTY September futures have added over 3.77 lakh shares or
1.63% in Open Interest indicating fresh addition of shorts. The NIFTY PCR stands at 0.95 as against 0.96 yesterday.

Coming to pattern analysis, the description remains more or less on similar lines. The Markets failed to fill up the gap it created in  August and decline further to fall past its previous lows. Today, on back of addition of short positions in the system and the Markets getting oversold on Daily Chart see some short covering coming in. However, it would take more for the Markets to form a base and potential bottom at these levels. For the Markets to form base at these levels, it will have to show pullback not just on short covering but also on fresh buying coming in. Recently, the Markets have also been falling on back of very less supportive buy volumes over and above the selling pressure that it witnesses.

All and all, the Markets still remain in doldrums and any pullback that is likely today should not be construed as a bottom formation unless the Markets shows definite signs for that. So far as fresh purchases go, the medium term investors can start deploying some 20.30% of their available funds while sitting mainly on cash. Overall, even with some solid technical pullback, utmost caution is advised at higher levels.