The levels of 6350 has continued to act as resistance as the Markets retraced after forming the day’s high of 6349.95. Today as well, expect the Markets to open on a quiet note again and look for directions. The intraday trajectory would be important to decide the trend for today and the behaviour of the Markets vis-a-vis the levels of 6350 would be crucial to watch for.

The lead indicators continue to remain in place. The RSI—Relative Strength Index on the Daily Chart is 59.68.31 and it has reached its highest value in last 14-days which is bullish. It does not show any bullish or bearish divergence as such. The Daily MACD continues to remain bullish as it trades above its signal line.

On the derivative front, NIFTY January futures have shed over 1.44 lakh shares or 0.82% in Open Interest. This shows that minor short covering was seen in the last hour of the trade. It would be important to see that, given the expiry a week away, this translates into fresh long positions being built up.

Going by the pattern analysis once again, the overall analysis remains on similar lines. The Markets will have to move past the levels of 6350 for a sustainable up move shall occur. Until this happens, we would see the Markets remaining in a broad trading range with the levels of 6200 acting as its major  base and support. However, along with moving past the 6350 levels, it would be equally important to see that this happens with volumes and good amount of participation.

All and all, we would see the Markets attempting to take a definite direction once again today while opening on a quiet note. Sectoral out performance would continue and therefore it is advised to continue with a very specific and selective approach. While protecting profits, if any, at higher levels, overall positive caution is advised for today. 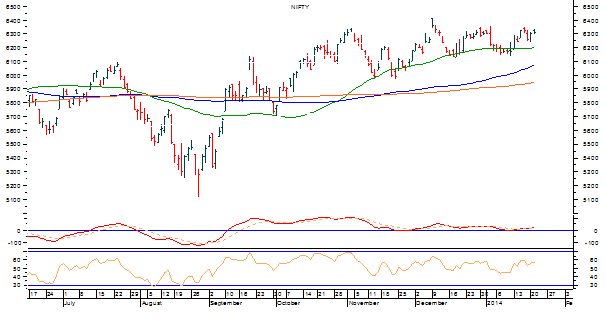 The Markets have continued to remain in a trading range while maintaining the levels of its 50-DMA as its base and given the technicals read along with global cues, it is likely to remain so for couple of sessions. Today, expect the Markets to open on a flat and quiet note and look for directions. To achieve a directional consensus, it would be important for the Markets to move past the levels of 6350 with volumes.

The lead indicators continue to remain in place. The RSI—Relative Strength Index on the Daily Chart is 57.5210 and it continues to remain neutral as it shows no bullish or bearish divergence or any failure swings. The Daily MACD remains bullish as it trades above its signal line.

On the derivative front, the NIFTY January futures have added over 5.69 lakh shares or 3.33% in Open Interest. This continue to signify that during the range bound consolidation, there have been no significant unwinding and fresh longs have continued to have been added.

Given the structure of the Daily Charts, the Markets have remained in a 120-odd point trading range with the levels of 50-DMA acting as its lower base and support. With the Markets continuing to trade in a narrow range, the possibility of a breakout has increased and the bias remains on the upside if lead indicators are read along with F&O data.

All and all, so far today’s session goes, we would continue to see a quiet opening and a ranged movement in the Markets. Given no structural breach on the Daily Charts, we continue to advice to strictly refrain from shorts. Any consolidation period should be utilized to make selective purchases as the sectoral out performance would continue. While maintaining adequate liquidity, cautious optimism is advised for today.