Due to technical glitch, we are not able to send across your copy of Daily Market Trend Guide in regular PDF Format. We are reproducing the brief version of the Market Trend for today. Inconvenience caused is sincerely regretted.

Expect the Markets to open on a moderately positive note and look for directions. The markets have reversed its gains yesterday and it would be important to see if they continue with their up move and attempt a breakout on the upside again by moving past the levels of 6050. The behavior of the Markets vis-a-vis the levels of 6050 would be important to see if it continues to  consolidate of attempts a breakout.

The RSI--Relative Strength Index on the Daily Chart is 62.19 and it is neutral as it shows no bullish or bearish divergences or failure swings. The Daily MACD trades above its signal line.

On the Derivative front, the  NIFTY January futures have added a very nominal Open Interest of 13050 shares or 0.09%. This is practically unchanged. But the positive reading from this is that with the yesterday's rise, the OI has not decreased and there has been no short covering in the Markets.

All and all, Markets to open and trade moderately positive and likely to attempt a breakout if it moves past the key resistance levels. Given this structure, selective purchases can continued to be made while strictly avoiding shorts. Profit too needs to be protected at higher levels. Overall, positive outlook with mild caution is advised for today.
Milan Vaishnav,
Consulting Technical Analyst,
www.MyMoneyPlant.co.in
http://milan-vaishnav.blogspot.com
+91-98250-16331
milanvaishnav@mymoneyplant.co.in
milanvaishnav@yahoo.com
Posted by MyMoneyPlant.co.in at 1/18/2013 08:39:00 AM No comments: 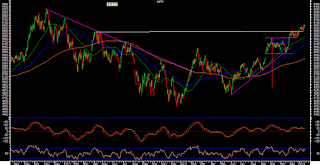 Today, we might see some respite from the weakness we saw yesterday in the second half of the session. The Markets today are likely to open on a moderately positive note and look for directions. With the Markets not moving past the levels of 6050 yesterday, it is still very much in a broad trading range and thus intraday trajectory would continue to remain crucial to decide the trend for today.

The RSI—Relative Strength Index on the Daily Chart is 58.6359 and it is neutral as it shows no negative divergence or failure swings. The Daily MACD is bearish as it has reported negative crossover and it now trades below its signal line.

On the derivative front, NIFTY January futures have shed over 9.71 lakh shares or 6.26% in total Open Interest. This signifies that there was long unwinding yesterday and not creation of fresh shorts. This is negative sign but it remains to  be seen if we see creation of fresh longs at any given levels.

The yesterday’s weakness was attributed to RBI Governor’s remark of the inflation being too high to consider any rate cuts. This lead to reaction in the rate sensitive stocks. However, this being discounted, and if we go strictly by the pattern analysis on the Daily Charts, the structure suggests that the Markets may continue to remain under range bound consolidation before it breaks out on the upside with a sustainable rally.

All and all, even with moderately positive opening expected, the Markets are likely to remain in a b road trading range. This will have some volatility ingrained in it. Unless the Markets breaks the levels of 5950 on the downside, there will be no technical weakness on the Charts. Overall, we continue to reiterate to avoid shorts and at the same time remain light and ultra selective  while taking long positions. While protecting profits wherever possible, cautious outlook is advised for today.

The Markets have attempted a breakout yesterday as it spurt up in the last hour and half of the trade to close above the upper band of the trading range to end the day with modest gains. The Markets opened on a mildly positive note and traded in a capped range for the most part of the session. The Markets spent more than half of the trading session in a narrow 20-odd points range and in the afternoon trade, briefly dipped into the red as it  gave its intraday low of 6018.60. However, in the last hour and half of the trade, the Markets saw a sharp pullback, mixed with some short covering and some buying, went on to give the day’s high of 6068.50. It finally ended the day at 6056.60, posting a modest gain of 32.55 points or 0.54% while forming a higher top and higher bottom on the Daily High Low charts. 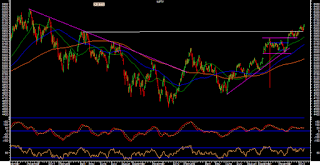 The lead indicators and F&O data show mixed and little contradictory signals with mild possibility of the Markets consolidating before giving a runaway rally. The RSI—Relative Strength Index on the Daily Chart is 67.2466 and it does not show any failure swings. However, NIFTY has set a new 14-day high whereas RSI has not and this is a BEARISH DIVERGENCE. However, on the other hand, Daily MACD has just reported a positive crossover and is now bullish as it trades above its signal line.

On the derivative front, NIFTY January futures have shed over 4.36 lakh shares or 2.74% in Open Interest. This signifies that the spurt that we saw in last hour and half of the trade was more on account of short covering than fresh buying.

All and all, it would be important to see if the short covering that we saw yesterday translates into fresh buying today. For the Markets to continue with its up move, it would be important for it to remain and trade above 6050 levels. Until this happens, it can continue to consolidate, but the undercurrent remains certainly buoyant. While strictly avoiding shorts, selective approach to the Markets is advised with cautious optimism. 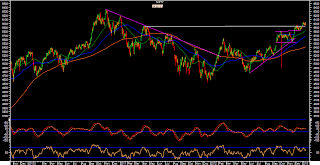 Today, expect the Markets to open on a flat to mildly positive note and look for directions. Technically speaking, since the Markets have ended the day near the high point of the day, they are expected to continue with the up move, at least in the initial trade. However, there are chances that it opens flat and consolidates a bit before it attempts to move past the levels of 6042-6050 which is the upper end of the trading range.

The lead indicators point towards mild possibility of a mild an brief consolidation. The RSI—Relative Strength Index on the Daily Chart is 64.3570 and it does not show any failure swings. The NIFTY has set a new 14-period high but RSI has not and this is Bearish Divergence. The Daily MACD still continues to remain bearish as it trades below its signal line.

On the Derivative front, NIFTY January Futures have added over 2.30 lakh shares or 1.47% in Open Interest which is a positive sign.

Give this reading of the lead indicators along with the derivatives data, there are mild chances that the Markets would consolidate before it breaks out and move past the levels of 6050. However, the bias remains on the upside as the trend remains intact.

All and all, as the Markets still continues to remain in a range it will have to move past the levels of 6045-6050 comprehensively to achieve a breakout. There are mild chances that we see some brief consolidation period, but with an upward bias. So, while strictly avoiding shorts, longs should be continued to  be taken selectively while protecting profits at higher levels. Selective approach with cautious optimism is advised for today. 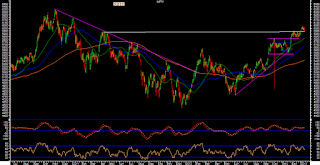 The RSI—Relative Strength Index on the Daily Chart is 56.3683 and it is neutral as it shows no negative divergences or failure swings. The Daily MACD continues to remain bearish as it trades below its signal line.

On the derivative front, NIFTY January Futures have continued to shed over 4.06 lakh shares or 2.52% in Open Interest and this is certainly not a good sign for the Markets. The NIFTY PCR stands unchanged at 1.04. It would be critically important to see if we see fresh buying coming out at these levels later today.

As mentioned earlier, the Markets have taken support at 5950 at Close levels. These are the levels from where the Markets made an upward breakout after resisting for couple of weeks. It would be therefore important for the Markets to take support at these levels. Any movement below this can inflict further short term weakness in the Markets. Today, the Markets are also likely to react to the Inflation numbers coming in and also to the TCS numbers which are slated to come out later today.

All and all, the Markets still remains critically poised. Though there is no any break down on the Daily Charts, maintenance of  certain levels for the Markets as mentioned would be critically important. It is advised to still continue to refrain from shorts and at the same time remain ultra selective while taking fresh positions. Over exposure should be avoided. Cautious outlook is advised for today.