The Markets continued with its corrective action yesterday as well as it opened on a negative note, remained in a sideways trajectory for the most part of the session and weakened further towards the end to end the day with losses. The Markets opened on a negative note and gave its intraday high of 6286.85 in the early minutes of the trade. Thereafter, the Markets lost some ground to trade further in the negative. The Markets spent the most part of the session in a sideward trajectory moving in a narrow 20-odd point range. In the last hour of the trade, the Markets saw some more weakness creeping in and it went on to give the day’s low of 6230.55. It finally ended the day at 6237.05, posting a net loss of 70.85 points or 1.12% while continuing to form a lower top and lower bottom on the Daily High Low Charts. 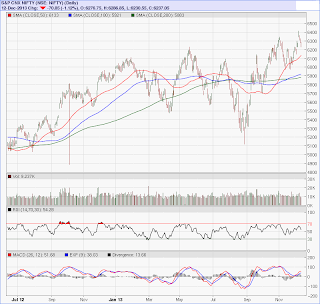 The RSI-Relative Strength Index on the Daily Chart is 51.28 and it remains neutral with no bullish or bearish divergences or any failure swings. The Daily MACD continues to remain bullish as it trades above its signal line.

On the derivative front, has further added 2.06 lakhs shares or 0.94% in Open Interest. With ever fall in last three sessions, the Markets have added open interest. This clearly indicates that the Markets are seeing fresh building of short positions which are expected to lend support at any time now.

Given this, it is important to note that there has been no structural breach as yet on the Charts. Further, whatever that we saw was a minor correction which has remained range bound and also the F&O data shows creation of fresh shorts in the system in the last 3 days of declining markets. 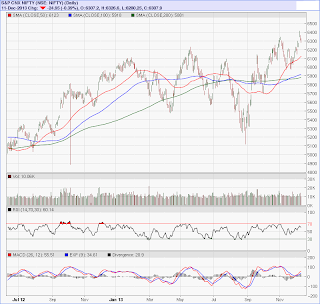 MARKET TREND FOR TODAY
Today, expect the Markets to open again on a negative note and continue with its corrective activities, at least in the initial trade. The Markets have been witnessing a correction after euphoric reaction to the assembly election results on a lower volume. Today as well, it would see such activity but like yesterday, we can see improvements coming in as we go ahead in the session. Intraday trajectory would remain critical to decide the trend for today.
For today, the levels of 6345 and 6370 would act as resistance whereas immediate supports exist at 6280 and 6255 levels.
All lead indicators continue to remain in place. The RSI—Relative Strength Index on the Daily Chart is 60.14 and it is neutral as it shows no bullish or bearish divergences or any kind of failure swings. The Daily MACD too remains bullish as it continues to a trade above its signal line.
On the derivative front, NIFTY December futures have added a nominal 61700 shares or 0.21% in Open Interest. This continues to show that no major profit taking has been witnessed in the Markets.
Going by the pattern analysis, the Markets have been consolidating after a euphoric reaction to the assembly results, as mentioned earlier. The lead indicators and the F&O data clearly show that there is certainly no negative breach in the pattern and the undercurrent continues to remain buoyant.
All and all, the Markets may see modestly negative opening but the overall bias continues to remain positive. We may see improvement coming in at any moment as we go ahead in the session. It is strongly advised to avoid creating short positions. Selective purchases may be continued to be made. Overall, continuance of cautiously positive outlook is advised for today.
Milan Vaishnav,
Consulting Technical Analyst,
www.MyMoneyPlant.co.in
http://milan-vaishnav.blogspot.com
+91-98250-16331
milanvaishnav@mymoneyplant.co.in
milanvaishnav@yahoo.com
Posted by MyMoneyPlant.co.in at 12/12/2013 09:11:00 AM No comments:

Due to continuing technical glitch, we have not been able to publish your copy of Daily Market Trend Guide in regular PDF format. The section "Market Trend for Today" is reproduced below in text format. Inconvenience caused is sincerely regretted.MARKET TREND FOR TODAYThe Markets saw a range bound consolidation yesterday as it saw a minor profit taking yesterday as it it ended the day at 6332.85, posting a net loss of 31.05 points or 0.49% while forming a higher to and higher bottom on the Daily Charts.Today, expect the Markwts to once again open on a mildly lower note and look for directions. There are chances that we see lower opening today but it woukd be consolidation on a broader note and there are chances of Markwts improving as we go ahead in the session.Today, the levels of 6350 and 6385 would act as resistance and the levels of 6290 and 6255 would act as immediate supports.All lead indicators continue to remain in place. The RSI - Relative Strength Index on the Daily Charts is 62.34 and it is neutral as it shows no bullish or bearish divergence or failure swings. The Daily MACD continues ti remain bullish as it trades above its signal line.On the derivative front, NIFTY December futures have added 4.83 lakh shares or 1.87% in open interest. This signifies that there has been some creation of short positions in the Markets.Overall, the Markets are just seeing a range bound consolidation and there is no structural breach on the Chars. The Markets may see some ranged movement but overall consolidation of these Markets remains with upward bias. Given this readin, shorts should be strictly avoided. While protecting profits at higher levels, selective purchases can be made. Overall cautious optimism is advised for today.Milan Vaishnav,Consulting Technical Analyst,MyMoneyPlant.co.in
Posted by MyMoneyPlant.co.in at 12/11/2013 09:04:00 AM No comments:

MARKET TREND FOR TODAY
After forming and closing at new highs, today, we can expect to see a mildly positive opening once again and we will see the markets opening on a mildly positive note and continuing with its up move. However, the levels of 6415 has no become a immediate top for the Markets and we cannot rule out the possibility of Markets consolidating around these levels while this acts as an immediate top and a resistance.
For today, the levels of 6415 and 6440 would act as immediate resistance levels for the Markets. The supports exist at 6300 and 6275 levels.
The RSI—Relative Strength Index on the Daily Chart is 65.09 and it has reached its highest value in last 14-days which is bullish. It does not show any bullish or bearish divergence. The Daily MACD continues to remain bullish as it trades above its signal line.
On the derivative front, NIFTY December futures have gone on to add a massive 20.54 lakh shares or 10.53% in Open Interest. This indicates that fresh longs were created and no major profit booking was witnessed from all time highs.
Given all this, it is clear that undercurrent continues to remain intact. However, since the Markets have retraced from the 6415 levels, we might see some consolidation happening near these levels.
All and all, we should see a mildly positive opening today and see a range bound trade happening. Though it would be now important to guard profits at higher levels, selective purchases may still be made with any retracements. Shorts should be strictly avoided. Defensives should out perform if the Markets consolidate. Overall continuance of positive outlook is advised for today.
Milan Vaishnav,
Consulting Technical Analyst,
www.MyMoneyPlant.co.in
http://milan-vaishnav.blogspot.com
+91-98250-16331
milanvaishnav@mymoneyplant.co.in
milanvaishnav@yahoo.com
Posted by MyMoneyPlant.co.in at 12/10/2013 08:59:00 AM No comments: 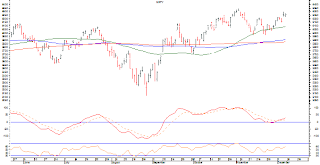 Today, the Markets are all set to give a thumbs-up reaction to the Assembly elections which has seen the current congress government getting routed out of power. The Markets are set to open on a very strong and gap up note as this is viewed much positively by the Markets. Today’s opening levels would see the Markets opening to its all-time highs.

Today, the markets may find resistance near 6350 and 6375 levels, just technically speaking as this would be an uncharted territory. These are just statistical levels, derived with the help of trend lines and patterns.

The lead indicators remain firmly in place. The RSI—Relative Strength Index on the Daily Chart is 59.5341 and it has reached its highest value in last 14-days which is Bullish. It does not show any bearish or bullish divergence. The Daily MACD continues to stay bullish while it trades above its signal line.

On the derivative front, NIFTY has added over 4.78 lakh shares or nearly 2.52% in open interest. This shows that the we have had positive consolidation on Friday which had an positive bias.

Going by the inputs above and the perceived positive noting of the Assembly elections, the Markets are set to give a all time high as it is set for a very strong and gap up opening today. The Markets are more or less likely to maintain these levels as such.

Overall, though gap up opening is almost set today, it is advised to protect profits wherever applicable and continued to make selective purchases rather than frenzied buying. The Markets have set a bullish undertone but it would be obvious to see some profit booking coming in, though very small, at higher levels. Overall, strong positive outlook is advised for today as well.