The levels of 8985 would remain immediate resistance for the Markets. The supports would exist much lower at 8850 and 8775 levels.

The RSI—Relative Strength Index on the Daily Chart is 76.8426 and it has formed the fresh 14-day high with is bullish. However, it continues to trade in “overbought” zone. It does not show any bullish or bearish divergence. The Daily MACD remains bullish while trading above its signal line.

On the derivative front, the NIFTY saw in-line rollovers as compared to its 3-month average and so did the stock futures. NIFTY has continued to see net addition in Open Interest. However the overall Open Interest in the Derivative segment has crossed the Rs. 1 Trillion mark which certainly should prevent the market participants from throwing caution into the air.

Returning to pattern analysis, the Markets have continued to resist to the upper rising trend line and the levels of 8985 formed would continue to act as immediate top for the Markets. For any fresh up move to occur, the Markets will have to move past this level and while it does so, it will need good amount of conviction and volumes. IMPORTANTLY, if the Markets moves past this level while remaining “overbought”, the sustainability of such up move would be a matter of concern.

Overall, as mentioned, under the present technical structure of the Markets, any consolidation or minor correction, which looks imminent, would be very healthy for the Markets. It would lend sustainability and strength to the present up move that the Markets have seen. Under present circumstances, we continue to reiterate the view of vigilant protection of profits at higher levels. Fresh purchases should be restricted and made on selective basis.

We can expect the Markets to see a stable and quiet opening but at the same time, it becomes very important to note that though the Markets have demonstrated good amount of strength by a flat close, it has potentially formed a immediate top for itself at 8985 levels. Even if the undercurrent which remains certainly intact, some amount of ranged consolidation coupled with mild profit taking cannot be ruled out. Further, we enter the expiry day of the current derivative series and therefore the session would continue to remain dominated with rollovers.

The levels of 8985 would now act as immediate resistance and the supports would come in at 8820 and 8750 levels on the lower side.

The RSI—Relative Strength Index on the Daily Chart is 75.7446 and it has reached its highest value in last 14-days which is bullish. However, it now clearly trades in “overbought” zone and shows no bullish or bearish divergence. The Daily MACD remains bullish trading above its signal line.

On the derivative front, rollovers continued as NIFTY February series added over 84.04 lakh shares or 69.91% in Open Interest.

Taking a cue from pattern analysis, as mentioned in our yesterday’s edition of Daily Market Trend Guide, the Markets have now resisted precisely at the upper rising trend line as evident on the Daily Charts. Having said this, even if the sentiment remains buoyant, some amount of consolidation or mild profit taking from higher levels continue to remain imminent. Also, the levels of 8985 would now act as immediate top for the Markets.

Overall, given the technical structure of the Charts, with the Markets resisting precisely at the upper rising trend line and further coupled with the fact that it trades “overbought”, it is very likely to see retracements with each up move. Though there may not be any significant correction, but this range bound consolidation will certainly have high degree of volatility ingrained in it. Under such scenario, we continue to reiterate very vigilant protection of profits at higher levels. 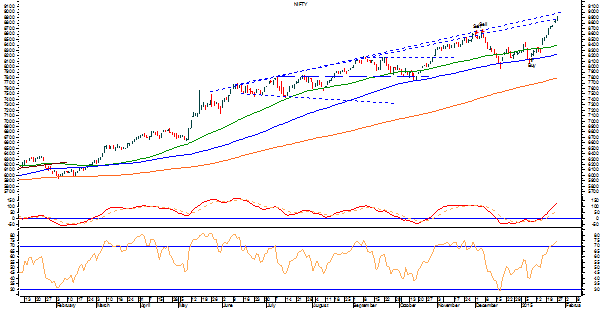 The Markets have continued to demonstrate high liquidity driven chase and we can expect this buoyant trend to continue. However, with the existing structure of the Chart, we cannot rule out modestly negative to flat opening to the session. Even if we get a positive opening, some amount of consolidation has become imminent in the Markets. With each higher level, it enforces more caution into the air. Further, while we enter into penultimate day of expiry of current series, rollovers would dominate the session as well.

The levels of 8930 and 8975 would act as immediate resistance for the Markets. The downside supports come in much lower at 8790 and 8725 levels.
The RSI—Relative Strength Index on the Daily Chart is 75.6375 and it has reached its highest value in last 14-dayw which is bullish. It does not show any bullish or bearish divergence but it continues to trade in “overbought” zone. The Daily MACD continues to remain bullish while trading above its signal line.

Coming to pattern analysis, the Markets have attempted to move past one of the upper rising trend line. Another one exist at 8975 and this is a major resistance going by the structure of the Charts. This may cause greater resistance simply because of the fact that it is longer term trend line and the Markets have resisted this in last couple of months. Further to this, the Markets have risen over 845-odd points from the intraday lows it formed earlier this month. Coupled with the fact that it now trades clearly “overbought” it certainly cautions us in the immediate short term.

Overall, even if the overall up trend remains intact, a mild profit taking from higher levels or consolidation just cannot be ruled out. There are high chances that in case of any higher opening or any intraday up move, some amount of consolidation remains imminent. Keeping this in view, it is strongly suggested to refrain from making fresh purchases and remain highly selective for fresh longs. More importantly, all existing profits should be very vigilantly protected at higher levels. Overall, high degree of caution is advised for the day.

MARKET TREND FOR TUESDAY, JANUARY 27, 2015
The Markets shall open after a long weekend following holiday on account of Republic Day. Speaking purely on technical grounds, the Markets are likely to take some breather as it now trades overbought and have also resisted a rising trend line. However, following developments like QE by ECB, we might see its effect percolate opening session and might see positive opening as well. In either case, it would now become imperative to guard existing profits and positions.

The RSI—Relative Strength Index on the Daily Chart is 73.4949 and it has reached its highest value in last 14-days which is bullish. However, it now continues to trade “overbought”. No bullish or bearish divergences are seen as well. The Daily MACD remains bullish while it trades above its signal line. On the Weekly Charts, Weekly RSI is 70.5163 and it shows no failure swing. However, the NIFTY has formed a fresh 14-week high but Weekly RSI has not yet and therefore its shows a Bearish Divergence. Further, the Weekly RSI too trades in “Overbought” zone. Weekly MACD continues to remain bearish trading below its signal line.

On the derivative front, the NIFTY January futures have a negligible addition of 98,575 shares or 0.44% in Open Interest. We have expiry week, short of one day and therefore the entire week is expected to remain dominated with rollovers.

Overall, reading the technical indicators, on both Daily and Weekly Charts, we can fairly expect the Markets to see minor profit taking at higher levels and consolidate. However, importantly, it can also positively react to developments like QE by ECB and therefore might continue to surge ahead as well. Even if this happens, this rise now should be used to protect profit on existing positions. Fresh purchases should be made with restrain and vigilant protection of existing profits is advised for the day.