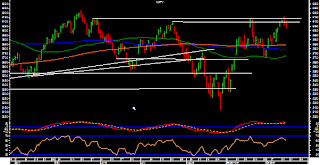 The RSI—Relative Strength Index on the Daily Chart is 60.3845 and it is neutral as it shows no bullish or bearish divergence or any kind of failure swing. The Daily MACD continues to remain bullish as it trades above its signal line.

On the derivative front, NIFTY October  futures has added 71,200 shares or nominal 0.37% in open interest. We can say that the OI figures have remain practically unchanged. This suggest that there was neither any unwinding of long positions nor any shorts were seen created.

Given the above reading, it can fairly be said that the Markets are under no directional consensus as of now and they very clearly appear to be in a broad trading range and in consolidation phase. The analysis remains more or less same as yesterday and the levels of 6130-6150 would continue to act as immediate top for the Markets.

Overall, it can very fairly be concluded that that with the levels of 6130-6150 acting as major resistance and immediate top, sustainable up move shall occur only above these levels. Until then, the Markets would continue to remain in a broad consolidating range with some amount of volatility ingrained in it. While protecting existing profits, Markets should be approached with caution and selective optimism. 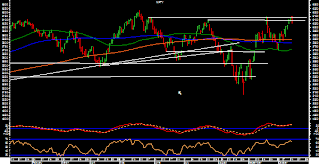 Going by pattern analysis, the Markets have not been able to breach its immediate previous tops of 6130-6150 levels and these levels are likely to continue to act as immediate tops. Today, expect the Markets to open on a flat to modestly positive note and look for directions. To the most likelihood, it is shall continue to remain in consolidation phase and the levels mentioned would continue to act as resistance.
The levels of 6130 and 6155 would continue to act as immediate resistance on the Charts. The supports come in much lower at 3020 and 5975 levels.
The RSI—Relative Strength Index on the Daily Chart is 64.0789 and it is neutral as it shows no positive or negative divergence or any kind of failure swings. The Daily MACD continues to trade above its signal line. On the Candles, n engulfing bearish line occurred (where a black candle's real body completely contains the previous white candle's real body).  The engulfing bearish pattern is bearish during an uptrend (which appears to be the case with NIFTY).  It then signifies that the momentum may be shifting from the bulls to the bears.
On the derivative front, NIFTY October futures have over 9 lakh shares or 4.93% in Open Interest. This is the positive factor as there has been no unwinding of positions seen.
Given this reading, if we go by pattern analysis, the Markets are due for a minor correction as the levels of 6130-6150 have held out as immediate tops and would continue to pose immediate resistance for the Markets. However, given the derivative figures, the Markets would resist a downside as it has added in net open interest. However, given both of the readings, we can fairly conclude that the Markets are likely to see a range bound consolidation with a downward bias.
Overall, there shall be no immediate and sustainable up move in the Markets until they move past the levels of 6155. Until this happens, we may see the Markets consolidating with some amount of volatility ingrained in it. Any purchases that are made should be made on highly selective basis and shorts should be avoided. Overall, cautious outlook is continued on the Markets.

Today's analysis for the markets remains more or less on similar lines that of yesterday. The markets traded on a very capped range and they are yet to move past their important resistance levels of 6130-6150.

Today, the Markets are expected to open on a stronger note but again, the opening levels in the Markets would take them and make them open near resistance levels. It would be therefore, very critically important to see if the Markets sustain those levels and capitalize on that.

The RSI on the Daily Chart is 66.1359 and it has reached its highest value in last 14 days. The Daily MACD continues to trade above its signal line. On the Candles, engulfing bullish pattern has occured. If the engulfing bullish pattern occurs during an uptrend (which appears to be the case with NIFTY), it may be a last engulfing top which indicates a top.  The test to see if this is the case is if the next candle closes below the top of the current (white) candle's real body.

The NIFTY October futures have shown reduction in Open Interest.

Given all this in view, it is very important to see the trajectory the Markets form. It is likely that the Markets open higher, but pare gains during the session. While avoiding fresh aggressive purchases, profits on open positions should be protected. Cautious optimism is advised for today.
Milan Vaishnav,
Consulting Technical Analyst,
www.MyMoneyPlant.co.in
http://milan-vaishnav.blogspot.com
+91-98250-16331
milanvaishnav@mymoneyplant.co.in
milanvaishnav@yahoo.com
Posted by MyMoneyPlant.co.in at 10/15/2013 09:12:00 AM No comments: 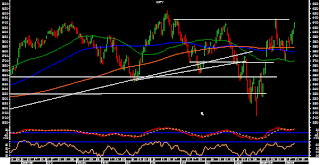 MARKET TREND FOR TODAY
We are likely to open and begin week on a flat note. It is time that the Markets are expected to consolidate before it moves up further. Technical charts very clearly suggest that we would again see some consolidation or minor correction from these levels. Weak IIP data that came out later on Friday would contribute to this. Further we have a truncated week as Wednesday is a trading holiday on account of Bakri Id.
For today, the levels of 6130 would act as major resistance levels for the Markets. The supports come in much lower at 6020 and 5965 levels.
The RSI—Relative Strength Index on the Daily Chart is 65.4167 and it has reached its highest value in last 14-days which is bullish. It does not show any bullish or bearish divergence.  The Daily MACD remains bullish as it trades above its signal line. On the Candles, there are signs again of forming a potential top. On Candles, A hanging man occurred (a hanging man has a very long lower shadow and a small real body).  This pattern can be bullish or bearish, depending on the trend.  If it occurs during an uptrend (which appears to be the case with NIFTY) it is called a hanging man line and signifies a reversal top.
On the Weekly Charts, RSI is 59.3236 and it has reached its highest value in last 14-weeks. The Weekly MACD continues to trade above its signal line.
On the Derivative front,  NIFTY October futures have over 9.71 lakh shares or over 5.76% which is certainly a positive sign.
Given all the reading above, if we read the lead indicators and the F&O data, it surely suggests that the Markets have got the steam left on the upside. However, if we rely on pattern analysis which is equally or even more important, it suggests that the Markets are nearing its major resistance levels and we are all and more likely to see some consolidation or some minor profit taking coming in from these levels.
All and all, it can fairly be concluded that we might see some consolidation taking place. Further, as mentioned, weak IIP numbers are likely to contribute to this. Under such a structure of the Charts and Markets, we would advice to refrain from creating aggressive positions while avoiding shorts. Any profits that exist should continued to be vigilantly protected. Overall, cautiously positive outlook is advised for today.