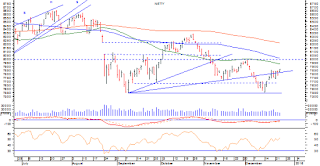 MARKET TREND FOR THURSDAY, DECEMBER 24, 2015
The Markets have advanced yesterday ending near the high point of the day and speaking purely on technical grounds, we can expect a modestly positive opening once again. Markets are expected to open on a modestly positive note and is likely to advance in the initial trade. The most logical target of this continuance of the up move can be the 50-DMA levels, i.e.  7933 levels. However, it remains important for the Markets to defend 7820 levels in event
of any consolidation.

The RSI—Relative Strength Index on the Daily Chart is 53.2270 and it does no tshow any bullish or bearish divergences. However, the RSI has formed its fresh 14-day high and this is bullish. The Daily MACD stays bullish as it trades above its signal line.

On the derivative front, the NIFTY December futures have shed over 13.14 lakh shares or 7.13% in Open Interest. This is a very clear indication of heavy short covering taking place yesterday. The NIFTY PCR stands at 0.83 as against 0.80.

Coming to pattern analysis, as detailed in our yesterday’s edition, the Markets have attempted to confirm the bottom / reversal. It pulled back some 300-odd points from its important pattern support and a 52-week lows and thereafter it oscillated and consolidated in 100-odd points range and attempted to move up once again forming a higher bottom. If it continues to do so and succesfully forms and confirms a immediate bottom, the next logical targets / resistance would be the 7930-7940 range for the  Markets.

All and all, the Markets are likely to open positive, and trade with modest gains in the initial trade. It would be important for the Markets to sustain and continue to buuild up on the expected modest opening that it might get. In event of any consolidation / minor weakness, the 7820 levels would be important to watch out for. Cautiously positive outlook is advised for today. 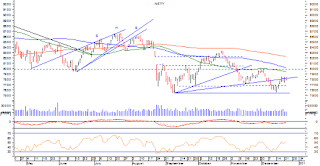 MARKET TREND FOR WEDNESDAY, DECEMBER 23, 2015
Markets are poised at a very critical juncture as it has been resisting to a rising trend line which also acts as a important pattern resistance. Today, we can expect a positive opening for the Markets and it would be of paramount importance that the Markets builds up further post positive opening in order to confirm the reversal / formation of a bottom. The trend line has been rising and so is the resistance level associated with this. The levels of 7820 would be important to watch out for in this context.

The RSI—Relative Strength Index on the Daily Chart is 48.1722 and it remains neutral as it shows no bullish or bearish divergence or any failure swings. The Daily MACD is bullish as it trades above its signal line.

On the derivative front, the NIFTY December futures have shed over 1.08 lakh shares or 0.59% in Open Interest. This figure, once again remains relatively negligible. The NIFTY PCR stands at 0.80 as against 0.81.

Coming to pattern analysis, as mentioned often, the Markets have been attempting to confirm a bottom / reversal after it took support at its 52-week lows and a double bottom. Having said this, it pulled back some 300-odd points from there. It has been oscillating in a capped 100-odd points range and have been resisting to its important pattern resistance level of 7800. It is important to note that this pattern resistance is a rising trend line and therefore with each passing day, the level required to move past this resistance also rises. This makes it difficult for the Markets to give a decisive up move. Today, this important level stands at 7820.

All and all, as mentioned above, the levels of 7820 would be important and it would be critically important for the Markets to move past this level. Until it does so, the Markets will continue to oscillate and will remain of any devoid of any decisive up move. No clear directional bias or confirmation of bottom will take place until this happens. While remaining moderate on overall exposures, selective and cautiously positive outlook is advised for today. 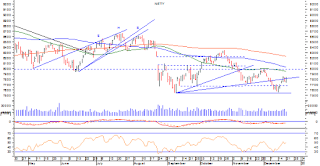 MARKET TREND FOR TUESDAY, DECEMBER 22, 2015
We are likely to see a flat opening today and the Markets are likely to oscillate in a capped range. The Markets have attempted to remain above 7800 levels and today as well, in event of any minor downsides, it would be very important for the Markets to remain above this level in order to just consolidate and avoid any weakness from creeping in. The volumes would continue to remain lower as well.

The RSI—Relative Strength Index on the Daily Charts stands at 51.2887 and it remains neutral as it shows no bullish or bearish divergence or any failure swings. The Daily MACD remains bullish as it trades above its signal line.

On the derivative front, the NIFTY December futures have shed nominal 88,875 shares or 0.48% in Open Interest. This certainly indicates minor short covering in net terms but the change in OI remains negligible. The NIFTY PCR stands at 0.81 as against 0.78.

Coming to pattern analysis, if we take a broader look, the Markets bounced back nearly 300-odd points from its very important pattern support and 52-week low levels of 7540. Having done this, it is now attempting to confirm a bottom. In previous couple of sessions, the Markets have consolidated in a broad range of 100-oddpoints and have so far managed to remain above one of its important pattern resistance levels of 7800. In ideal situation, we can see the Markets consolidating in a ranged manner for some more time and ultimately resuming its up move. In order to confirm its bottom and resume its up move, it would be important for the Markets to stay above 7800 levels.

All and all, the levels of 7800-7810 remain critical to watch out for. Any breach below these levels will delay the confirmation of a bottom and will keep the Markets vulnerable to selling pressures. The volumes would be important but due to the week shortened by holidays, we can expect volumes to be thin. It is advised to continue to adopt very cautious and stock specific outlook on the Markets. 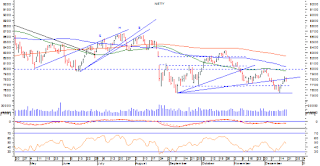 MARKET TREND FOR MONDAY, DECEMBER 25, 2015
Markets have traded very much on analyzed lines on Friday as it tried to defend the levels of 7800 in the morning but later slipped and ended below it. Today, we can fairly expect the Markets to open on a modestly negative note and trade with minor losses in the initial trade. Today, the Markets would again face a resistance at 7800-7810 range and the behavior of the Markets vis-à-vis these levels would be critical to watch out for. Until the Markets moves past these levels, it will not confirm any reversal and would remain susceptible to selling pressures.

The RSI—Relative Strength Index on the Daily Chart is 46.4664 and it is neutral as it shows no bullish or bearish divergence or any failure swings. The Daily MACD remains bullish as it trades above its signal line. On the Weekly Charts, the Weekly RSI is 42.5261 and this too remains neutral without showing any bullish or bearish divergences or any failure swings.
The Weekly MACD remains bearish as well while trading below its signal line.

On the derivative front, the NIFTY December futures have shed over 4.216 lakh shares or 2.24% in Open Interest. This clearly signifies unwinding of long positions in the Markets. The NIFTY PCR stands at 0.78 as against 0.82.

While having a look at pattern analysis, the Markets have continued to resist to 7800 level. Though it defended this level in the first half of the session on Friday, it ultimately slipped below that level and closed well below that. This level was a major pattern resistance that the Markets needed to move past and sustain above that. Therefore, this level will continue to pose resistance for the Markets in the immediate short term. Further, in this situation, even though the Markets have shown good amount of pullback from recent 52-week low and pattern support, it is yet to confirm its bottom and therefore continues to remain susceptible to some more weakness.

All and all, in event of the Markets not confirming its bottom, it becomes necessary that we continue to wear a cautious outlook on the Markets. Until the Markets meaningfully crosses 7800-7810 levels and sustain above that, short term weakness will continue to persist and the Markets will remain vulnerable to selling pressures from higher levels. While remaining highly selective, continuance of cautious stand is advised for today.