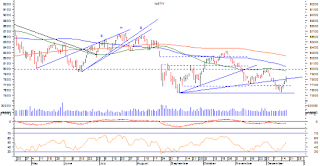 MARKET TREND FOR FRIDAY, DECEMBER 18, 2015
Markets might witness today a bit of consolidation after nearly 300-odd points of a pullback in last couple of sessions. We can expect the Markets to open on a modestly negative note and consolidate in the initial trade. The likely opening level would be around its important pattern resistance of 7800 that it breached on the upside. It is likely that the Markets open around those levels and see some consolidation. Behavior of the Markets vis-à-vis this level would be important to watch out for.

The RSI—Relative Strength Index on the Daily Chart is 51.8876 and it has just reached its highest value in last 14-days which is bullish. Also, the RSI has set a fresh 14-period high but the NIFTY has not yet and this is Bullish Divergence. The Daily MACD has reported a positive crossover and is now bullish as it trades above its signal line.

On the derivative front, the NIFTY December series have shed over 4.50 lakh shares or 2.31% in Open Interest. This is clear indication that the sharp rise that we saw yesterday has come back on short covering. The NIFTY PCR stands unchanged at 0.82.

While coming to pattern analysis, the Markets have managed to move past yet another of its pattern resistance levels of 7800 yesterday after resisting to it in the first half of the session. Technically speaking, this should not act as a support in event of any consolidation. We have mentioned often in our previous editions of Daily Market Trend Guide that though the Markets have pullback after finding support at its 52-week lows, it has not yet confirmed the bottom. Today, we expect a modestly negative opening around the pattern support and ideally speaking, the Markets should consolidate with remaining above this critical support level of 7800, consolidate for a day or so an resume its up move. If this happens, it would amount to confirmation of bottom for a immediate short term.

As mentioned above, the behavior of the Markets vis-à-vis the level of 7800 would be important to watch out for. The Markets will have to remain above 7780-7800 zones in order to just consolidate and avoid any weakness from creeping in. Any breach below these levels will induce some short term minor consolidation in the Markets and delay confirmation of a bottom. It is advised to continue to remain modest and selective on purchases while continuing to protect profits at higher levels. MARKET TREND FOR THURSDAY, DECEMBER 17, 2015
The Federal Reserve, in a much expected move, raised the interest rates by 25 bps and has finally initiated the lift-off. However, the reaction to this would be limited and this would remain more or less a non-event as much of the development was already factored in. The Markets are expected to open with marginal gains and are likely to resist at its pattern resistance levels of 7800. The technical structure would dominate and we will see the Markets attempting to consolidate after the expected positive opening.

The RSI—Relative Strength Index on the Daily Chart is 45.4183 and it remains neutral as it shows no bullish or bearish divergence or any failure swings. The Daily MACD continues to remain bearish as it trades below its signal line.

On the derivative front, the NIFTY December futures have shed over 7.61 lakh shares or 3.76% in Open Interest. This very clearly implies that there has been absolute short covering yesterday and the amount of caution has grown in the Markets. The NIFTY PCR stands at 0.82 as against 0.84 yesterday.

Coming to pattern analysis, as mentioned often in our previous editions of the Daily Market Trend Guide, the Markets have held on to its all important Double Bottom and 52-week low support of 7540 levels. It has managed to pullback nearly 200-odd points from there but bulk of this pullback have come on account of short covering and with lower volumes. It is also important to note that though this pullback has been witnessed, the Markets have not shown any signs of confirming a bottom formation until it consolidates, forms a higher bottom and resumes its up move. Currently it continues to face important pattern resistance once again after a expected positive opening today.

Overall, the Markets are likely to witness a rally but the rally would be less fuelled by Fed Rate hike and more dominated with technical structure of the Charts. The Markets faces a resistance at 7800 levels and it is very much likely that the Markets resists / consolidates at that level. Even some minor profit taking bout cannot be ruled out. It is advised to continue to adopt stock specific approach. Sectoral out performance would be seen. Very selective purchases can be made while protecting profits at higher levels. 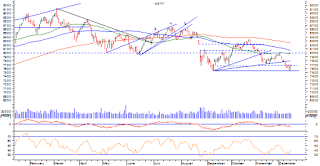 MARKET TREND FOR WEDNESDAY, DECEMBER 16, 2015
Today’s Market session would be important as it braces itself with the possibility of the Fed Rate hike later today and also to the fact that such hike / lift-off of 0.25 bps stands largely discounted in present valuations. Today’s opening is likely to be decently positive and the Markets are expected to continue with its pullback. Though no bottoms have been confirmed as yet, the level of 7540 has stood out as the valid support for the immediate short term.
For today, the levels of 7740 and 7775 will act as immediate resistance levels for the Markets. The supports come in at 7625 and 7590 levels.
The RSI—Relative Strength Index on the Daily Chart is 41.0456 and it remains neutral as it shows no bullish or bearish divergence or any failure swings. The Daily MACD stands bearish as it trades below its signal line.
On the derivative front, the NIFTY December futures have added over 4.34 lakh shares or 2.19% in Open Interest. The NIFTY PCR stands at 0.84 as against 0.81 yesterday.
While having a look at pattern analysis, it is very much evident that the Markets have attempted to find bottoms once again at its all important pattern support of 7540 level. Having said this, it is important to note that though the Markets have witnessed a good amount of bounce back / pull back from that level, it is yet to confirm any bottom. So, in a way, in spite of the pull back, the confirmation for a bottom formation still stands awaited. However, given the expected decent opening, the Markets are likely to continue with its pullback but it may encounter resistance once again some 50-70-odd points from here. Further, most importantly, the reaction to the Markets post Fed Rate hike decision would be of utmost importance.
All and all, the Markets have discounted the Fed Rate hike of 0.25 bps. It is likely to see a relief rally if the Fed hikes the rate on these expected lines. However, it will continue with such pullback only to meet is another pattern resistance. However, in an unlikely event of Fed holding back, it would lead to negative reaction from the Markets. Given the uncertainty, it is advised to strictly refrain from creating shorts as possibilities of rate hike are more and also keep the purchases very limited and moderate and continue to protect existing profits vigilantly at higher levels.
Milan Vaishnav,
Consulting Technical Analyst 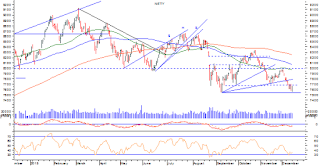 MARKET TREND FOR TUESDAY, DECEMBER 15, 2015
Markets have so far traded very much on expected lines and have attempted to take support near its important pattern support of 7540. Today as well, we can expect a quiet start to the Markets and this level, i.e. 7540 will continue to act as important support to the Markets. The Markets are likely to see some consolidation and some minor technical pullbacks as well but on the upper side, another level of 7680-7700 levels will continue to pose resistance as these are the pattern supports it breached on its way down.

Today, the levels of 7680 and 7700 will act as immediate resistance to the Markets. The supports come in at 7540 levels.

The RSI—Relative Strength Index on the Daily Chart is 36.5648 and this remains neutral as it shows no bullish or bearish divergence or any failure swings. The Daily MACD remains bearish as it trades above its signal line.

On the derivative front, the NIFTY December futures have added over 3.87 lakh shares or 1.99% in Open Interest. The NIFTY PCR stands at 0.81 as against 0.76.

Coming to pattern analysis, the Markets have attempted to take support at one of its very important pattern support and 52-week low of 7540. The Markets rebounded from there on expected lines yesterday but have still remained within a limited range and expects to encounter few more resistances on the way up. There are chances that in event of very less participation, the Markets consolidate and oscillate a bit in a give range and then pare some ground again. However, there will be no serious breach on the downside until the Markets are trading above 7540 levels. However, there are no signs of any clear bottom formation and the Markets continue to remain vulnerable to sell-offs at higher levels.

All and all, as mentioned above, the Markets are not yet out of the woods at all and though we have witnessed a technical pullback on expected lines, it continues to remain vulnerable to selloffs at higher levels. We continue to reiterate cautious outlook on the Markets and advice to keep exposures down to very limited levels until sings of clear bottom formation are seen. 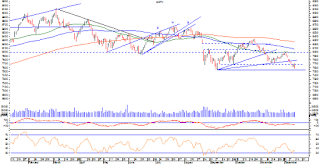 MARKET TREND FOR MONDAY, DECEMBER 14, 2015
The technical structures on the Daily Charts remain weak and following global weakness, we are once again likely to see a negative opening. The opening would be critically crucial because the likely opening levels will see the Markets testing its important pattern support and also the 52-week low levels. The nearly oversold nature of the Markets may attempt to lend some support but the undertone remains bearish ahead of the Fed Rate hike. The NOV WPI data and the YOY inflation data are set to come in but are expected to offer little help to the otherwise weak technicals.

The RSI—Relative Strength Index on the Daily Chart is 32.8756 and it is trading just above its oversold levels. Though it does not show any failure swing, the RSI is yet to make fresh 14-day low whreas the NIFTY has formed a fresh 14-day low and this is Bullish Divergence. The Daily MACD remains bearish as it trades below its signal line. On the Weekly Charts, the Weekly RSI stands at 37.9094 and shows a bullish divergence. However, this may just help Markets show some resilience in near term. The Weekly MACD remains bearish as it continues to trade below its signal line.

On the derivative front, the NIFTY December futures have added 5.79 lakh shares or 3.07% in Open Interest. This is clear indication of fresh short to have been added in the system.

While having a look at pattern analysis, the Markets are slated for lower opening. However, this opening will see the Markets testing its pattern support and also the 52-week lows that it had formed previously. This is important larger double bottom support. Also the expected lower opening might see the Markets getting nearly oversold as well. So these factors combined may attempt to lend support to the Markets in the immediate short term. However, the inherent structure remains bearish and the upsides and pullbacks, if any, shall remain thoroughly limited until a clear indication of bottom formations is seen. It is important to see that any serious breach below the levels of 7540 will see the Markets getting weaker in the immediate short term.

Over all, the current undertone of the Markets continues to remain bearish. Today’s expected lower opening may make the Markets nearly oversold and there are also chances that we continue to see some improvement as the session progresses. However, in any case, with no signs of any bottoms being formed, the undertone remains bearish. This technical structure may keep the Market volatile and any breach below 7540 will take the Markets lower. It is advised to continue to refrain from taking any major positions and adopt heavily cautious outlook on the Markets.