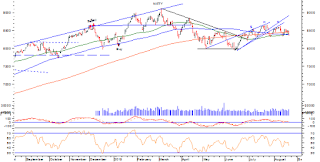 MARKET TREND FOR FRIDAY, AUGUST 21, 2015
Today, we are all likely to see a gap down opening in the Markets today. We have been mentioning potentially bearish Head and Shoulders formation on Daily Charts in couple of our previous editions of Daily Market Trend Guide and we might witness a downward breach today. Unless the Markets recovers post weak opening, we are likely to see the bearish undertone continuing in the Markets today. If the downside persists, it would mean more bearish structure for the Markets for the immediate short term.

The RSI—Relative Strength Index on the Daily Chart is 44.1047 and it remains neutral as it shows no bullish or bearish divergence or failure swings. The Daily MACD remains bearish as it trades below its signal line.

On the derivative front, NIFTY August futures have added over 2.43 lakh shares or 1.69% in Open Interest. This implies that apart from unwinding that we have witnessed, some amount of fresh shorts have been added to the system as well.

Coming to pattern analysis, we have been mentioning about Head and Shoulders pattern, which is always potentially bearish. As of yesterday, the Markets have been maintaining itself along its neckline which is made up of proxy trend lines comprising of 50-DMA and 100-DMA in close vicinity of each other. Having said this, the Markets have not broken down as of yesterday’s close. However, IMPORTANTLY, with the near gap down opening expected today, we will see a downward breach on the Charts down its neckline. This will imply a fresh bearish structure for the Markets for the immediate short term. Today’s it would be fine if the Markets improve as we go ahead in the session but if such weakness persist at Close levels, we will see some more weakness in the immediate short term.

Overall, the Markets are currently with a weak technical structure. With gap down opening today, we will see a downward breach from the potentially bearish Head and Shoulders formation and this may induce some more weakness in the immediate short term. The positive crossovers of the Markets may pose resistance to the downward breach but it would be important for the Markets to improve as we go ahead in the session. Persistence of weakness at Close levels will alter the structure of the Markets for the immediate short term. 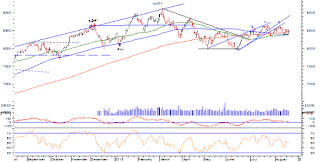 MARKET TREND FOR THURSDAY, AUGUST 20, 2015
The Markets have been giving parallel bars and consolidating on Daily Charts and therefore it continues to keep the analysis once again on similar lines. Today as well, while we keep the overall basis of the analysis same, we can expect somewhat negative opening in the Markets today. The Markets may once again see itself opening somewhere in between 200-DMA and 50-DMA and therefore the behaviour of the Markets post opening would continue to remain of critical importance.

The RSI—Relative Strength Index on the Daily Charts is 51.9445 and it remains neutral as it shows no bullish or bearish divergence or any failure swings. The Daily MACD remains bearish as it continues to trade below its signal line.

On the derivative front, NIFTY August futures have added over 1.60 lakh shares or 1.13% in Open Interest. This signifies that modest longs have been initiated in the system.

Going by the pattern analysis, the Markets have been hanging on to its 200 and 50 DMA at Close levels after forming a potentially bearish Head and Shoulders formation. The neckline has been formed by proxy trend lines in form of 50-DMA and the Markets have so far managed to hold all of them as Supports at Close levels. The behavior of the Markets vis-a-vis these DMAs would be crucial to watch out for in immediate short term. It would of paramount importance for the Markets to hold on to 8380-8420 range in order to avoid any significant weakness in the near term.

Overall, today, with the negative opening expected, intraday trajectory would be critical for the Markets and would dictate the trend for today as well as for immediate short term. It is advised to refrain from taking any significant exposures and more liquidity should be maintained while limiting the purchases. Volatility will continue to remain; however, some improvement as we go ahead in the session can be expected. Cautious outlook is advised for today. 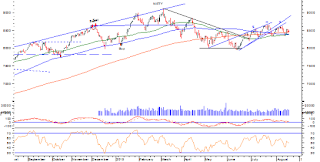 MARKET TREND FOR WEDNESDAY, AUGUST 19, 2015
Analysis for today once again remains on similar lines that of yesterday. The Markets are expected to open on a flat to mildly negative note and look for directions. The Markets have been struggling hard to hang on to its 200-DMA and 50-DMA at Close levels and today as well, the intraday trajectory that the Markets form would be crucial to determine the trend for today as well as for immediate short term.

The RSI—Relative Strength Index on the Daily Charts is 50.0168 and it is neutral as it shows no failure swings or any bullish or bearish divergence. The Daily MACD is bearish as it continues to trade below its signal line.

On the derivative front, NIFTY August futures have continued to shed yet another over 2.41 lakh shares or 1.67% in Open Interest. The NIFTY PCR stands at 0.98.

Coming to pattern analysis, the Markets have been precariously hanging on to the neckline of the fragile head and shoulders formation on the Daily Charts. More so because the neckline represents the proxy support of the DMAs; 50, and 100, and the Markets have so far managed to hold these levels as Close. Today as well, with the kind of opening expected, the Markets will have to manage and remain above the 8450-60 levels in order to prevent any weakness from creeping in. Any weakness, however temporary it may be, will make the Markets test 8400 levels if it breaches the 200-DMA even intraday. However, the patterns exhibit some possibilities of consolidation going on but with a positive bias as the 50-DMA has reported a positive crossover over 100-DMA. In normal course, with such patterns, the Markets may consolidate but usually does not break its bottom.

Overall, as mentioned, the Markets may continue to see consolidation and its behaviour vis-à-vis the levels of 200-DMA would be critically important. It may be noted that despite inherent possibility of buoyancy, the Markets are not completely out of the woods and are susceptible to selling bouts at higher levels. Keeping this is view, we continue to reiterate view of keeping exposures limited until directional bias gets clear. 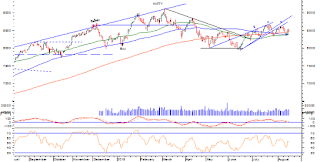 MARKET TREND FOR TUESDAY, AUGUST 18, 2015
Today’s market analysis continues to remain more or less on similar lines that of yesterday. We can expect the Markets to open on a modestly positive note and once again, just like yesterday, the levels of 200-DMA will continue to act as crucial support for the Markets. Markets will have to maintain itself above the 200-DMA levels in order to prevent any weakness from creeping in again. Also, the pattern changes on the Daily Charts are showing chances of inherent buoyancy getting built up once again.

The RSI—Relative Strength Index on the Daily Chart is 50.7270 and it remains neutral showing no bullish or bearish divergence or any failure swings. The Daily MACD remains bearish while trading below its signal line.

On the derivative front, NIFTY August futures have shed over 5.60 lakh shares or 3.72% in Open Interest. This very clearly makes visible that unwinding of positions continued in the futures segment. It would be necessary to see if fresh longs are initiated at these levels.

Coming to pattern analysis, as mentioned often in our previous editions of Daily Market Trend Guide, the Markets have, as of now, survived a scare from a potentially bearish Head and Shoulders formation on the Daily Charts. We had mentioned that this is little vague and not so classical formation and the Markets took support at its DMAs and bounced back. The up move that we saw on Friday, 14th, bought the Markets back into the trading range. Also, the 50-DMA has reported a positive crossover as it has crossed the 100-DMA from below. This indicates chances of upward momentum returning to the Markets in the immediate short term.

Overall, from the pattern analysis and the overall structure of the Charts, we can rely that the Markets have held on to its 200-DMA and 100-DMA as support at Close levels as of now. So long as the Markets maintain itself above these two DMAs, we will see it oscillating in a given range with a upward bias. Weakness will creep in only in event of the Markets breaching these levels. Overall, continuation of cautious approach with modest exposures in advised for today.