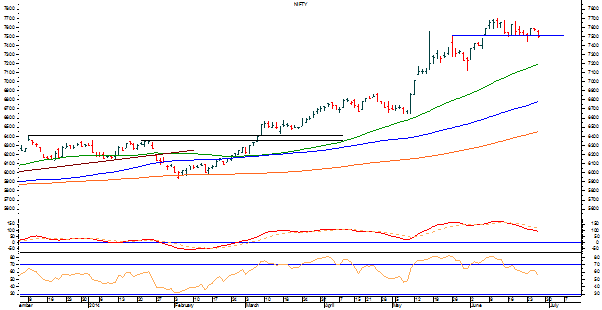 Today, the Markets faces a critical test as the behaviour of the Markets vis-à-vis the levels of 7510 would be critical. The Markets are again expected to open on a flat to mildly positive note but if it fails to move past the 7510 levels, there are chances that the some more weakness in the Markets creeps in. If it sustains above 7510, the consolidation would continue in the Markets.

The lead indicators do not paint a pretty picture. The RSI—Relative Strength Index on the Daily Chart is 54.9443 and it has reached its lowest value in last 14-days which is bearish. It does not show any bullish or bearish divergence. The Daily MACD continues to remain bearish as it trades below its signal line.

On the derivative front, the NIFTY July futures have added over 32.97 lakh shares or 30.20% in Open Interest. Apart from some long unwinding that has happened yesterday some amounts of fresh shorts too have been observed, though with lower quantities.

Going by the pattern analysis, the Markets have again done a miner breach of the short term support line at 7510 levels. We shall continue with consolidation if the Markets manages to trade above this level but if it breaches below this, we can expect some more weakness to creep into the Markets.

All and all, for the Markets to avoid further weakness from creeping in, it would be necessary for it to trade above 7510 levels. However, there are chances that the Markets, even if it opens on a positive note, resist around these levels. It is advised to stay away from high beta stocks, and purchases, if any should be curtailed to defensives only. Overall, continuance of neutral to cautious outlook is advised for today. 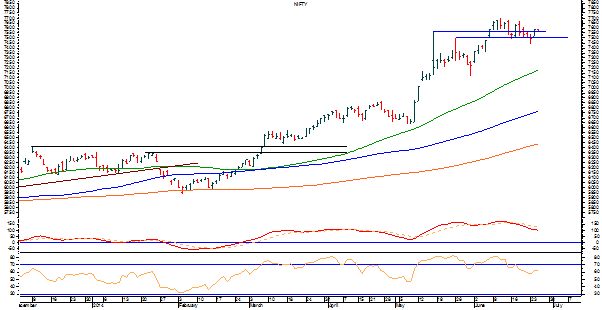 Today we enter the expiry day of the current June series and the session, like yesterday, is likely to remain dominated with rollovers and given some short positions, some intermittent jerks cannot be ruled out. The Markets are again expected to open on a quiet note and look for directions. Though the bias remains negative, sharp short covering, given the rollovers cannot be ruled out. Volatility shall persist.

The RSI—Relative Strength Index on the Daily Chart is 61.7439 and it is neutral as it shows no bullish or bearish divergence or any failure swings. The Daily MACD remains bearish as it continues to trade below its signal line.

Going by the pattern analysis, the Markets have managed to maintain levels above of 7510 and until that happens it is likely to continue to consolidate. In event of any slippage below the levels of 7510, we may see some more weakness creeping in. The Markets are currently in a broad trading range, and also in somewhat no-trade zone given the direction-less trend in the last couple of sessions. However, this can be termed as a capped and range bound consolidation in the Markets.

Given this reading, it is advised to continue to take fresh positions on highly selective basis and mainly on defensives. High beta stocks should be avoided and overall leverage too should be controlled and liquidity should be maintained. With the Markets likely to swing in either direction, more due to expiry and also due to technical indicators, overall low amount of exposure and caution are continued to be advised for today. 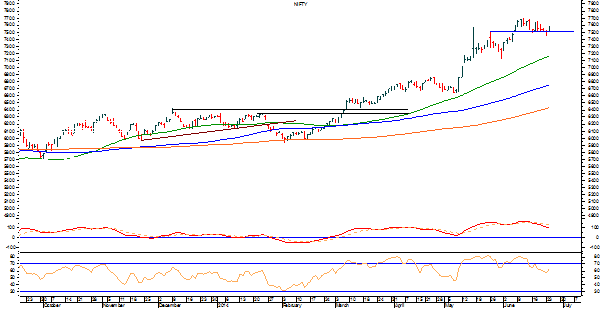 Today, we enter the penultimate day of the expiry of current derivative series and the Markets would continue to remain dominated with rollovers centric activity. The volatility will refuse to go away and shall remain ingrained. Today, we can expect a flat opening for the Markets but as the figures suggest, there are chances that we see some continuation of up move in the initial trade and at the same point, we can also see some volatile swings downward bias in the second half of the session.

The lead indicators continue to point towards mild negative bias. The RSI—Relative Strength Index on the Daily Chart is 62.7827 and it remains neutral as it shows no bullish or bearish divergence or any kind of failure swings. The Daily MACD continues to remain bearish as it trades below its signal line.

Going by the pattern analysis, the Markets have held on to a mild pattern support of 7510 levels. As evident from the Charts, the Markets will have to move past the levels of 7700.05 for a fresh upward breakout and until this happens, we will continue to see the Markets in a consolidation state. However, this consolidation shall remain volatile as we have been seeing as the trading range remains broad. 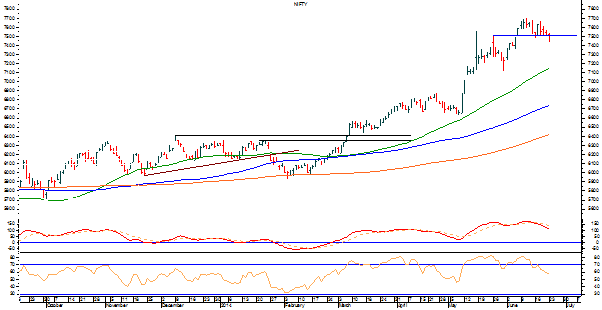 Today as well, expect the Markets to open on a positive note and look for directions. As evident on the Charts, the levels of 7510-7515 would be crucial and any slippage or trading below these levels would induce further weakness in the Markets. With rollovers started, the session would also remain dominated with rollover activities. Given the pattern analysis and the lead indicators, the chances of corrective activities continuing are high.

The lead indicators continue to paint a weak picture on the Daily Charts. The RSI—Relative Strength Index on the Daily Chart is 57.5188 and it has reached its lowest value in last 14-days which is Bearish. Also, the RSI has set a fresh 14-day low whereas NIFTY has not yet and this is continuance of clear Bearish Divergence. The Daily MACD continues to trade below its signal line and remain bearish as well.

Going by pattern analysis, the Markets have minor resistance at 7510-7515 levels and if the Markets do not sustain these levels, some more weakness is likely to creep in. Otherwise, it is likely to consolidate in a broad trading range, though with corrective bias.

All and all, given the technicals, reading of lead indicators and the F&O data, the possibility of corrective action is likely to continue. Also, at the same time, volatility would continue to remain ingrained in the Markets. It is advised to continue to remain stock specific and maintain moderate exposures. Overall, cautious to mildly negative outlook is advised for today.