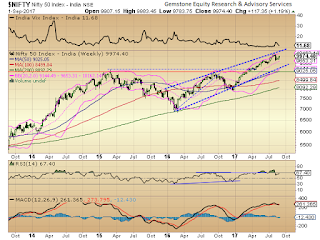 Our previous Weekly note mentioned about the Markets not seeing any major breakdown on the downside. As a matter of fact, the benchmark NIFTY50 performed better and ended with gains of 117.35 points or 1.19% on Weekly basis. The coming week has relatively better set up. Though we not see NIFTY racing beyond its lifetime highs too soon, but we may certainly see it testing its previous highs and making attempts to move past them. In event of any consolidation once again, the downsides are likely to remain defined, ranged and limited.

The Relative Strength Index –RSI on the Weekly Chart is 67.4058 and it is neutral showing no divergences against the price. The Weekly MACD is bearish while it trades below its signal line. A white body occurred on Candles but in the present circumstance; do not show any significant formations.

The pattern analysis of the NIFTY shows it trading in trading comfortably in the 18-month rising channel. Though there is some congestion at the present higher levels, the NIFTY continues to trade comfortably above all of its Moving Averages. 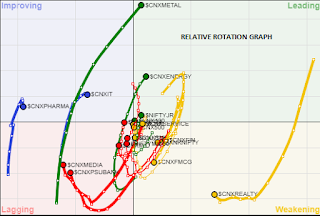 A study of Relative Rotation Graphs – RRG show METAL stocks are likely to provide leadership in event of any up move. They will continue to relatively outperform the NIFTY in coming week and are likely to get company from ENERGY stocks as well. Relative Out performance is also expected from broader Indices like NIFTY JR (NIFTY Next 50) and CNX100. We will see IT and PHARMA continuing to consolidate. No major out-performance is expected from FMCG,  REALTY, and AUTO. REALTY, PSUBANKS and INFRA stocks are expected to improve their relative out-performance and consolidate.

MARKET OUTLOOK FOR FRIDAY, SEP 01, 2017
With limited dosage of volatility the benchmark NIFTY50 oscillated in a 40-odd point capped range on either side on the expiry day of the August series and ended the day higher gaining 33.50 points or 0.34%. In all likelihood, we expect a modestly positive start to the Markets on Friday and expect the up move to continue. A minor positive sign is that the NIFTY has ended the day a notch above the short term 20-DMA and we may see the rally gaining some more strength. In event of any consolidation, the 50-DMA will continue to act as sacrosanct support. 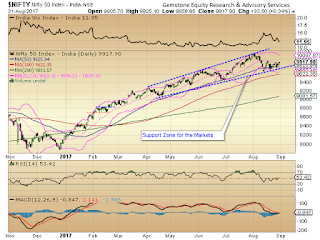 The Relative Strength Index –RSI on the Daily Chart is 53.4153  and it has marked its
highest value in last 14-days which is bullish. The Daily MACD remains bearish trading below its signal line but continues to move towards positive crossover. A long lower shadow has emerged on Candles and this is potentially bullish as it has appeared near immediate support levels.

The pattern analysis shows that the Markets forming a small congestion zone but at the same time it continues to trade comfortably within the upward rising channel. In the process, it has ended a notch above 20-DMA and this can be a short term positive sign for the Markets.

We reiterate and strongly advice to refrain from creating any short positions in the Markets. We believe that the immediate set up in the Markets has a bullish undertone and unless some critical support levels are breached, selective purchases should be made with any available downside. Overall, while maintaining a positively cautious view on the Markets, stock specific action can be expected.

MARKET OUTLOOK FOR THURSDAY, AUG 31, 2017
Markets recouped most of its previous day’s losses as the benchmark NIFTY50 ended the session on Wednesday with net gains of 88.35 points or 0.90%. If some critical assessments of such behavior are to be made, then the NIFTY has re-validated the levels of 50-DMA as its immediate support fourth time. To add further to that, the levels of 50-DMA has almost become a proxy trend line for the Markets as it remains in very close vicinity of the lower end of the rising channel that the Markets trade in. In order to successfully reverse the move, NIFTY will have to move past 9900-mark which is the short term 20-DMA. 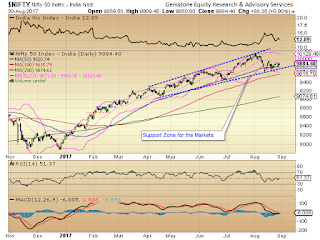 The Relative Strength Index – RSI on the Daily Chart is 51.3676 and it continues to remain neutral showing no divergences. Daily MACD stays bearish while trading below its signal line. No significant formations were observed on Candles.

The pattern analysis shows that the Markets have once again bounced back a bit from the lower support line of the channel that it has been trading in. While doing so, it has also taken support at its 50-DMA once again and has kept that support intact. However, it has continued to resist to its short term 20-DMA.

We enter the expiry day of the current derivative series and therefore, we cannot rule out volatility that may be seen ingrained in the session. Also, we cannot still throw caution wind as the NIFTY still resists at the 20-DMA. We still recommend exercising caution but with positive bias as the Markets have fair chances of moving past its 50-DMA and resume its up move within the range.

MARKET OUTLOOK FOR WEDNESDAY, AUG 30, 2017
The Indian Markets had a thoroughly disappointing session on Tuesday as it opened weak on expected lines taking cues from global markets but got even weaker as the day progressed. It went on to test the 50-DMA and ended a notch below it as the benchmark NIFTY50 ended with net loss of 116.75 points or 1.18%. We now stand at a very critical juncture. The opening levels on Wednesday would be extremely critical and any open below 50-DMA will see the Markets resisting to it. However, in all likelihood, we expect a modestly positive start. 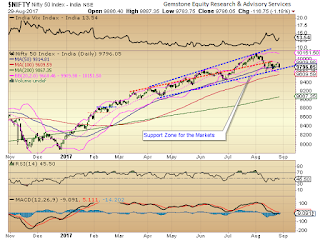 The Relative Strength Index – RSI on the Daily Chart is 45.5010 and it remains neutral showing no divergences against the price. The Daily MACD is bearish while trading below its signal line. On the Candle a black body occurred. It is a large body and holds significance as it occurred near the 20-DMA resistance area. It has reinforced the credibility of this resistance area.

The pattern analysis show that the Markets have so far managed to cling on to the lower end of the multi-month channel that it has been trading in. Any breach below this will bring in more weakness. The previous low of 9685 would be extremely important level to watch for.

On one hand, NIFTY has formed a small congestion area and it has ended a notch below 50-
DMA and therefore, it makes the level of 9685 extremely important. Any weakness from current levels will bring in more weakness. The present structure remains slightly weaker and some chances of a short term downward breach cannot be ruled out. However, on the other hand, NIFTY co-relation analysis with Asian Peers shows that there are very feeble chances of any serious weakness creeping in. While we enter the penultimate day of expiry of current series, we expect a modestly positive start and recommend extremely cautious outlook on the Markets. 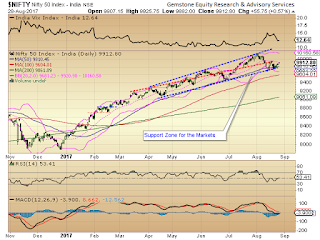 The Markets had a relatively stable session on Monday as the benchmark NIFTY50 opened higher on expected lines but traded in much capped range during the day. Though NIFTY ended the day with net gains of 55.75 points or 0.57%, it has still continued to resist to its short term 20-DMA. We expect a quiet opening on Tuesday and it would be important for the Markets to move past 20-DMA to avoid any short term weakness from creeping. Though Monday was less volatile, we cannot rule out volatility in coming days as we approach the expiry of current derivative series.

The Relative Strength Index – RSI on the Daily Chart is 53.4063 and continues to remain neutral showing no divergences. The Daily MACD too stays bearish while trading below its signal line but it continues to move sharply towards positive crossover. A rising window has emerged on Candles. Though this requires confirmation, it usually implies the continuation of the uptrend on the following trading day.

The pattern analysis continues to show Markets comfortably placed within the upward rising channel as evident on the Charts. It would be important for the Markets to move past the short term 20-DMA which it has resisted in the previous session.

Overall, as of now, there are no signs that point towards any immediate weakness returning on the Charts. The Markets may remain volatile due to rollovers in coming days but we strictly recommend not to initiate any major short positions in the Markets. On the long side, only modest positions may be taken until we see through the expiry. Overall, cautiously positive approach is advised for the day.

MARKET OUTLOOK FOR MONDAY, AUG 28, 2017
Markets ended flat on Thursday after gaining just 4.55 points or 0.05% as the benchmark NIFTY50 remained extremely range bound throughout the day. Markets will open after a long weekend and on Monday; there are all chances that the Markets see a positive opening. NIFTY had under-performed its Asian peers since at least 2 trading days. Friday had seen Asian Markets trading much stronger and there are all chances that we may see NIFTY adjusting its levels. However, key thing to see would be to see  whether nor not we are able to sustain the good opening that we are likely to get. 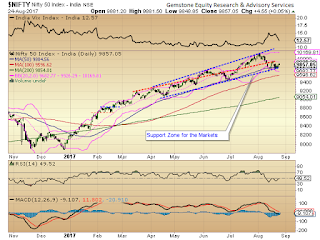 The Relative Strength Index – RSI on the Daily Chart is 49.5173 and it is neutral and shows no divergence against the price. The Daily MACD is still bearish as it trades below its signal line. However, it is sharply moving towards reporting a positive crossover. No significant formations were observed on Candles.

The pattern analysis very clearly show that that NIFTY has managed to stay within the upward rising multi-month channel that it has been trading in as very much evident on the Charts. Further to that, the levels of 50-DMA have been defended so far and the levels of 9685 continue to remain intact as the immediate major pattern support.

Overall, we see a most-likely stronger opening on Monday. However, key would be to sustain it. In most likelihood, we will see the Markets in a capped range and the bias is likely to remain positive. We reiterate to avoid creating any short positions as short traps may occur. In the same breadth, we continue to recommend protecting profits as well with each higher up move. All downsides may be continued to be utilized to make select purchases. Cautious optimism is advised for the day.