As evident from the Daily Chart, the Markets have taken support at its 100-DMA levels and these levels are expected to hold as support in the near term.  Expect the Markets to open on a positive note and register some gains in the initial trade as the global markets are currently off their intraday lows and our domestic charts too show a clear possibility of the Markets showing a technical pullback and the levels of 100-DMA holding out as support in the near term.

The RSI—Relative Strength Index on the Daily Chart is 37.1683 and it has reached its lowest value in last 14-days which is bearish. However, it does not show any bullish or bearish divergence. The Daily MACD remains bearish while trading below its signal line.

On the derivative front, NIFTY October futures have shed over 2.77 lakh shares or 1.89% in Open Interest indicating unwinding of long positions in the Markets.

Returning to pattern analysis, we have often mentioned that the Markets have formed an immediate top of 8180 and this would continue to act as immediate top. Following that formation, the Markets have retraced nearly 432 points NIFTY. It now trades below its 50-DMA and has taken support at its 100-DMA levels and these levels are expected to hold as support levels in the immediate short term.

Overall, there are bright chances that the Markets, that reacted badly to global weakness, attempts to find support at the levels of 100-DMA and attempts a technical pullback. Though caution at any stage cannot be ruled out, bargain hunting and selective purchases can certainly be initiated. Action would remain limited to selective quality stocks and right picking can set to return equally quality gains in the near term. While continuing to remain selective, cautious optimism is advised for the day. 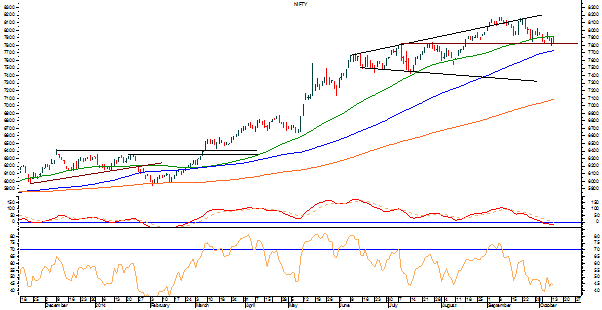 Markets will have a tough day as it will open after a gap of one day due to trading holiday on account of Assembly Elections in Maharashtra. The Markets will struggle between digesting global weakness that existed in the day in between and also positively react to the lower WPI data and possible BJP Victory in the  Maharashtra State Polls. Owning to this, the Markets may see a positive opening and might extend with gains. If any lower opening is registered, it would be knee-jerk reaction to the global weakness and we can certainly see improvement as the day progresses.

The RSI—Relative Strength Index on the Daily Chart is 43.8138 and it remains neutral as it shows no bullish or bearish divergence or any failure swings. The Daily MACD remains bearish as it continues to trade below its signal line.

On the derivative front, NIFTY October futures have shed over 1.07 lakh shares or nominal 0.73% in Open Interest. This shows no major shedding of open interest was observed and the Markets are showing a mixed directional trend.

Referring to trend and pattern analysis the Markets continue to trade below its 50-DMA but above its significant support zone of 7800-20 levels. The Markets will have to trade above these levels in order to avoid any further weakness. Any breach below these levels would take the Markets near its 100-DMA.

Overall, the apart from technical factors and global weakness, the Markets would also react to the positive macro economic data and possible BJP win the State Elections of Maharashtra and Haryana. Owing to these both negative and positive factors we will continue to see volatility ingrained into the session and the Markets are expected to continue to remain volatile in a broad trading range. Highly selective purchases may be made while approaching the Markets with positive caution. 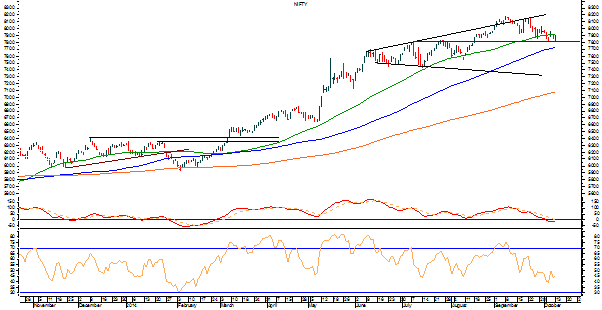 The Markets are expected to open on a mildly positive note and there are chances that it continues with its up move in the initial trade. However, the Markets are not completely out of the woods as though it has taken support near the mentioned levels, it is still trading below its 50-DMA, (though within its filters) and therefore possibilities of the Markets remaining in trading range cannot be ruled out. However, better Inflation data will certainly add fuel to the sentiment and aid recovery.

The RSI—Relative Strength Index on the Daily Chart is 45.1238 and it is neutral as it shows no bullish or bearish divergence or any failure swing. The Daily MACD continues to remain bearish while trading below its signal line.

On the derivative front, the NIFTY October futures have shed over 6.07 lakh shares or 3.94% in Open Interest. This signifies that the rise that we saw was more on account of short covering form lower levels. It remains to be seen if this short covering is further replaced with fresh buying.

Going by the pattern analysis, the Markets are not completely out of the woods. Though it took support at the 7800-20 range, it still trades below its 50-DMA and this may pose some resistance at higher levels. On the lower side, if the Markets tests these levels again then creeping of some more weakness just cannot be ruled out. There is no clear directional bias in the Markets.

Overall, the Markets still demands adequate amount of caution as it trades with no directional bias and structurally it has a bit of downward  / consolidation bias as it still trades below its 50-DMA. Though the chances of the Markets improving are equally good from these levels  because of lower inflation numbers  but until the directional bias gets evident, it is advised to continue the Markets with caution. 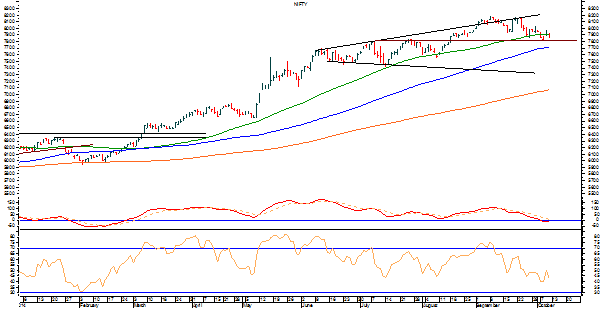 The Markets are likely to see a modestly negative to flat opening and tomorrow’s session is likely to be a sort of acid test for the Markets. The pattern support of 7815-20 levels would be crucial and the Markets will have to sustain above this in order to avoid any weakness. Any dip below this levels would be detrimental to the short term interest of the Markets and it may see some short term weakness creeping in. Little weak IIP data are likely to play its part but sustenance of 7800-7820 range would be extremely crucial.

The RSI—Relative Strength Index on the Daily Chart is 43.2324 and it remains neutral as it shows no bullish or bearish divergences or failure swings. The Daily MACD continues to remain bearish while it trades below its signal line. On the Weekly Charts, the RSI stands at 61.5373 and it has reached its lowest value in last 14-weeks which is bearish. Further, the Weekly RSI has formed a fresh 14-weak low but the NIFTY has not yet and this also leads to Bearish Divergence on Weekly Charts. The Weekly MACD too remains bearish while trading below its signal line.

Taking a look at pattern analysis, a distinct broadening formation continues on the Weekly Charts, more distinct than on the Daily Charts. Taking a simple cue at the trend and the moving averages, the Markets have breached its 50-DMA but has stayed within its filters as yet. However, any breach below the 7800-7820 levels would induce further weakness in the Markets making it prone to testing its 100-DMA levels. However, sustenance of Markets above the levels of 7800-7820 would keep it in range bound consolidation and trading range.

Overall, with the Weekly Charts also weaker, the Markets are unlikely to see any runaway up move unless induced by heavy short covering and other such factors. The Markets, so long as maintains levels above 7820 would remained in a broad trading range with good amount of volatility ingrained in it. It is advised to remain very light on overall exposure while maintaining enough liquidity. Moving ahead with caution is advised even when the stock specific out performance would continue.