It has been our privilege to have been associated with you so far.

While wishing you on the occasion of Independence Day, we wish to notify you of some changes at our end.

SEBI has come out with SEBI(Research Analysts) Regulations, 2014 {RA Regulations}. These Regulations, which covers Technical Analysts as well, required us to apply for Registration by the prescribed deadline with a Trade Name.

Further to this, we have streamlined our certain services as well, more specifically, Managed Trading Accounts and Managed Equity Portfolio services. We invite you to kindly visit www.EquityResearch.asia for details.

We assure you, the change is for the better. We strive to provide more focused service. We attempt to make our services "more personalized, more customized" and establish and maintain one-on-one touch with the Clients. We hope this endeavor will certainly add value to our current offerings.

Assuring you our best of our attention as always, as before.
Milan Vaishnav,
Consulting Technical Analyst 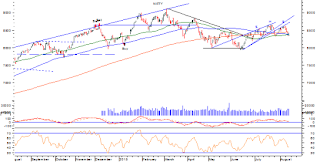 MARKET TREND FOR FRIDAY, AUGUST 14, 2015
Markets continue to hang on precariously at its 50-DMA and 100-DMA and its filters at Close levels. Expect the Markets to open on a flat to modestly positive note and attempt to stabilize and resist weakness creeping in for a potentially bearish formation on the Charts. However, for that the Markets will have to move past and trade as much above 8400-levels and upward to ward off any weakness from creeping in. Any small trigger or weakness and we will see the Markets breaching the neckline.

The RSI—Relative Strength Index on the Daily Chart is 42.1362 and it remains neutral as it shows no bullish or bearish divergence or any failure swings. The Daily MACD continues to remain bearish as it trades below its signal line.

On the derivative front, the NIFTY August futures have shed  over 3.29 lakh shares or 2.05% in Open Interest. This shows some unwinding still continued from higher levels.
Coming to pattern analysis, the Markets continue to trade just above the neckline of the fragile Head and Shoulder formation formed on the Daily Charts. The silver lining being --- this pattern is not so classical and the 50-DMA runs along like a proxy neckline raising the credibility of the chances for the Markets to take support at these levels. It is important to note that we cannot “pre-empt” a negative breach until it actually happens and cannot act in anticipation of a negative break down. It would be imperative and crucially important for the Markets to move past the critical levels of 8450 and trade above that to ward off any potential weakness from creeping in.

Overall, the Markets are still not completely out of the woods and are prone to any downward breach on even or slightest possible trigger. However, it is also resisting any downsides and may open to attempt and trade in positive at least in the initial trade. However, until the Markets move past and trade above 8450, it will be vulnerable to selling bouts from higher levels. We continue to reiterate to maintain cautious outlook on the Markets. 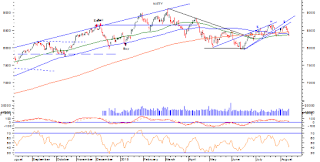 MARKET TREND FOR THURSDAY, AUGUST 13, 2015
Markets are poised today at a extremely critical juncture. It is expected that the Markets may open on a flat and quiet note and look for directions. The levels of 50-DMA today, i.e. 8372 will be crucial to watch out for and it is likely to pose resistance to the Markets. In order to avoid imminent weakness in the Markets, it would be crucially important for the Markets to move past this level. In even of any breach, the Markets will see more downsides induced by not-so-classical fragile potentially bearish Head & Shoulders pattern.

The RSI—Relative Strength Index on the Daily Chart is 41.6191 and it has reached its lowest value in last 14-days which is bearish. Also, the RSI has set a fresh 14-period low while NIFTY has not and this is Bearish Divergence. The Daily MACD remains bearish as it trades below its signal line.

On the derivative front, NIFTY August futures have shed over 5.22 lakh shares or 3.16% in Open Interest. This is bearish as this shows clear unwinding and reduction of positions.

Going by the pattern analysis, after resisting to the upward rising trend line drawn from 8000-levels, the Markets have formed a Head & Shoulders pattern on the Daily Charts. This pattern is a potentially bearish formation and has weakening measuring implications. If the Markets breach its neckline, the breach may take the Markets significantly on the downside. However, such pattern needs confirmation and requires the day’s high below the neckline. Further to this, one has to await confirmation for this. Even further to this, there are chances that the Markets take support at its all important DMAs which happen to be very near to the neckline.

Overall all, given the above mentioned scenario, lots of uncertainties remain in the Markets. Markets will see an acid test today in order to prevent itself from the break down from the neckline. Markets will attempt to reverse taking cues from good IIP data but in any case so long as the Markets trade above 8550 levels, it will remain vulnerable to downside selling bouts. Excessive exposures should be strictly avoided until the directional bias gets clear. 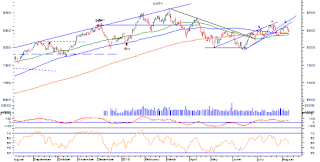 MARKET TREND FOR WEDNESDAY, AUGUST 12, 2015
Markets face a critically important session today. Expect the Markets to open on a negative note today, probably below its 200-DMA levels. These levels would be critical to watch out for. It would be crucially important to see if the Markets attempt to take support at these levels at Close and improve as the session progresses. If it does not happen, then we are probably heading for much weaker days ahead. Reason being, even if we keep aside fundamental development such as devaluation of Yuan, the Markets is anyway getting structurally weaker.

The RSI—Relative Strength Index on the Daily Chart is 48.7573 and it remains neutral as it shows no bullish or bearish divergence or any failure swings. The Daily MACD is bearish as it trades below its signal line after reporting negative crossover yesterday.
On the derivative front, the NIFTY August futures have shed over 36,000 shares in or just 0.22% in Open Interest. This is negligible figure and does not signify any major unwinding of positions.

Coming to pattern analysis, the Markets have not only resisted to the upward rising pattern resistance drawn from 8000-levels, it is also forming a potentially bearish Head and Shoulders formation. This formation is not classical but little vague but it is still valid. However, the silver lining is, that just below the possible neckline, there are three DMAs, i.e. 200-DMA, 100-DMA and 50-DMA respectively. These increase the chances of the Markets to take support at these levels respectively s they appear. However, if the Markets breach the neckline, then the measuring implication of this pattern will make the Markets see some more downsides in coming sessions.

Overall, the Markets are getting technically weaker each passing day. The longer the Markets remain in this structure without any pullback, the weaker it will get. It would be very important for the Markets to saw a sharp pullback in coming days and make the potentially bearish H&S pattern invalid. However, now, with each dip, chances of some more weakness creeping in will increase. Keeping this in view, it is advised to refrain from taking fresh positions and maintain liquidity and strong caution in the Markets. 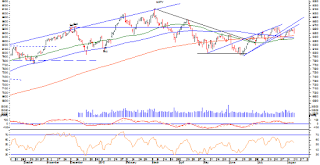 MARKET TREND FOR TUESDAY, AUGUST 11,, 2015
As very clearly evident from the Daily Charts, the Markets are troubled by a classical pattern resistance drawn from the lows of 8000-levels it formed in June. Today as well, we can expect the Markets to open on a modestly positive note but continue to remain in the consolidation zone for some more time. The Markets will grossly depend upon the intraday trajectory that it forms post opening and would continue to resist to the upward rising pattern resistance levels.

The RSI—Relative Strength Index on the Daily Chart is 53.5338 and it remains neutral as it shows no bullish or bearish divergence or failure swings. The Daily MACD has reported a negative crossover and is now bearish as it trades below its signal line.

On the derivative front, the NIFTY August futures have shed over 2.48 lakh shares or 1.47% in Open Interest and this signifies some shedding and unwinding of positions in the NIFTY.

Coming to pattern analysis, the Markets have continued to vehemently resist to the rising trend line of the channel drawn from 8000-levels it formed in June. Following this as we have often mentioned in our previous editions of Daily Market Trend Guide that since the trend line keeps rising, the levels required for the Markets to have a upward breakout too keeps rising. This prevents the Markets from the clear breakout and it continues to resist to the upward rising pattern resistance even if it continues to post gains. Further to this, though the Markets have three major supports on the downsides in form of all three moving averages, it is forming a potential Head and Shoulder formation which is potentially bearish. However, positive speaking, the volume tests required for this is missing and the three major support levels should prevent it from happening.

Overall, the Markets are in a very critical juncture and they are likely to continue to remain volatile and prone to profit taking bouts just like yesterday. Given this scenario, it would also see some good amount of volatility ingrained in it. More emphasis should be laid on protecting profits than taking new positions. With no clear directional bias as of now, cautious approach with enough liquidity should be maintained.