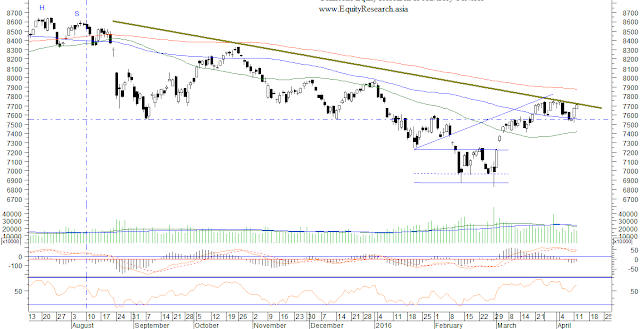 The Markets are likely to open on a decently positive note following stable Global cues. With this, the Markets may attempt to move past the resistance zone of 7700-7730 levels. However, it would be thoroughly important to see that the Markets maintain its expected opening gains and capitalize on it. It is also important to note that we once again have a short week with tomorrow and day-after-tomorrow being holidays on account of Dr. Ambedkar Jayanti and Ram Navmi respectively.

The RSI—Relative Strength Index on the Daily Chart is 58.8997 and it remains neutral as it shows no bullish or bearish divergence or any failure swings. The Daily MACD is still bearish as it trades below its signal line.

On the derivative front, the NIFTY April futures have shed over 5.07 lakh shares or 3.30% in Open Interest. The NIFTY PCR stands at 0.86 as against 0.83 levels.

Coming to pattern analysis, the Markets will attempt to move past the pattern resistance zone of 7700-7730 levels. It will have a minor resistance at 7775 levels. However, apart from all this, the key thing would be the ability of the Markets to capitalize on the expected positive opening. It would be very essential for the Markets to maintain the expected opening gains and continue with the up move. However, the consistently declining Open Interest with every up move certainly raises a question mark on the sustainability of the up moves. 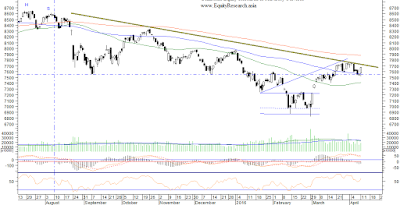 The RSI—Relative Strength Index on the Daily Chart is 56.9579 and it remains neutral as it shows no bullish or bearish divergence or any failure swing. The Daily MACD stays bearish as it trades below its signal line.

On the derivative front, the NIFTY April futures have shed over 3.15 lakh shares or 2.01% in Open Interest. This makes very much evident the amount of short covering that was witnessed from lower levels. The NIFTY PCR stands at 0.83 as against 0.73.

Coming to pattern analysis, the levels of 100—DMA and the pattern support near 7550 have acted as supports for the Markets for the immediate short term. The way the sloping trend line have acted as stiff resistance at levels 7700 and above, the pattern support at 7550 and the 100-DMA have held out as support at Close levels. Having said this, if we presume that the falling trend line continues to pose resistance for the Markets at levels 7700 and above, we will see the Markets consolidating with falling tops and a flat support. This may see a formation of Descending Triangle on the Daily Charts.However, this would be too early to comment. But as of now, the levels of 7700 and upwards will continue to act as stiff pattern resistance to the Markets.

Overall, the Markets will also remain cautious to the IIP and March CPI numbers that would come up later in the day today after the Market hours. The Markets still rules in a range below its pattern resistance. We reiterate that one should not get carried away with yesterday’s rise and use any up move that we witness to book and protected profits rather than creating any fresh positions. Continuance of cautious outlook is advised for today. 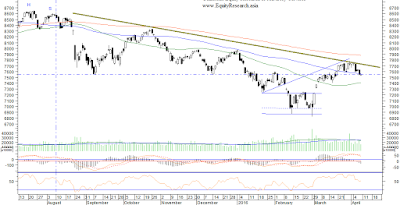 The Markets are expected to open on a quiet note and slightly into negative and look for directions. It has ended slightly below its 100-DMA and is likely to test its important pattern support of 7550 as well and therefore the intraday trajectory that the Markets form would be important to watch out for. Also, the levels of 7550 and the behavior of the Markets vis-à-vis the 100-DMA which is 7566 will be important at Close level as well. There are chances that both of these levels continue to pose resistance to the Markets.

On the derivative front, the NIFTY April futures have shed yet another 43,200 shares or 0.27% in Open Interest. Though this figure may seem insignificant individually, but the Markets have shed significant open interest over last couple of sessions.

Overall, the analysis would remain more or less once again on similar lines like that of entire previous week. The Markets will trade in a range with a downward bias and no significant up move shall occur until they move past 7700 levels. Until that happens will see the Markets attempting to take support around 7550 level. Any breach below this will induce further weakness in the Markets. We continue to reiterate to keep fresh purchases limited and adopt cautious outlook on the Markets for today.