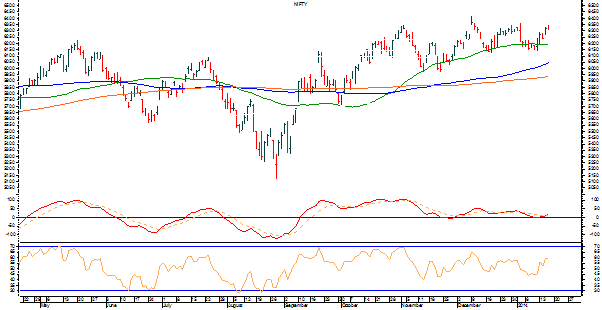 Today, we are again likely to see a quiet opening in the Markets. The Markets have attempted a breakout and to give a sustainable upside, it will have to move past its minor double top formation of 6350 as we had mentioned yesterday. The intraday trajectory would be important after opening today and for any up side to sustain, the Markets will also have to see volumes coming in.

On the derivative front, the NIFTY January futures has added over 8.21 lakh shares or 4.51% in Open Interest and this very clearly shows that there has been lot of addition of short positions in the Markets. In the last session, we have seen overall  premiums contracting as compared to the spot price and this clearly signifies creation of short positions in the system.

Overall, the structure on the Daily Charts remains stable. Going by the pattern analysis, the Markets would encounter resistance near its minor double top formation of 6350. For any up move or a fresh breakout the Markets will have move past those levels with conviction and volumes. However, given the F&O data, the formation is much supportive for a  up side breakout and the bias certainly continues to remain on the upside baring a consolidation of a day or two.

All and all, in the above narrated readings, it is advised to remain light on positions until a directional bias is confirmed. However, given the pattern analysis and the F&O data, shorts should strictly be avoided and any downside should be used for making very selective purchases. Overall, cautious optimism is advised for today. 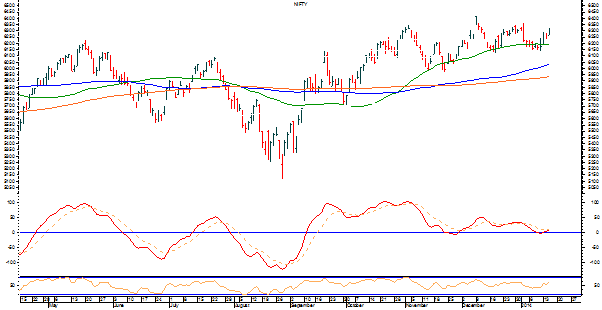 Today, we can expect the Markets to open on a flat to mildly positive note and continue with its up move, at least in the initial trade. The Markets are expected to inch upwards and are likely to test the minor double top formation ahead. The undercurrent continues to remain buoyant and we will see continuation of the up move as such.

The RSI—Relative Strength Index on the Daily Charts is 59.6067 and it has reached its highest value in last 14-days which is bullish. The Daily MACD, as we had reported in our  yesterday’s edition, has reported a positive crossover and it is bullish as it now trades above its signal line.

On the derivative front, NIFTY January futures have added over 4.60 lakh shares or 2.59%  in Open Interest. This signifies that the Markets have continued to see building of fresh positions and no short covering or any kind of unwinding has been witnessed.

The overall structure and the patterns on the Daily Charts continue to remain intact. The Markets have resumed its up move after critically maintaining the supports of its 50-DMA at the close levels. The Markets shall achieve a fresh breakout once again, taking it to newer heights once its moves past the levels of 6360 with volumes and stays above that.

Overall, with the overall structure remaining stable, the undercurrent and tone of the Markets certainly remains stable and buoyant. It is advised to continue to make selective purchases and any downside or any brief consolidation should be used to make purchases while protecting profits at higher levels. Continuance of positive outlook is advised for today. 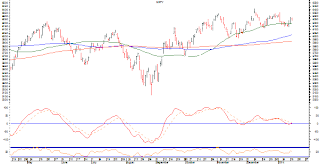 After a consolidating session yesterday, we can expect the Markets to open on a modestly positive note and look for directions. Today, it might attempt to resume its up move but at the same time, it is also likely to react to the WPI and CPI inflation data coming in later today before noon. Any positive outcome, which is likely shall aid the Markets on the upside. In the same breath, it can also give knee jerk reaction if it turns out higher than what is expected.

The RSI—Relative Strength Index on the Daily Chart is 52.7493 and it is neutral as it shows no failure swings or any kind of bearish or bullish divergence. The Daily MACD is bearish as it trades below its signal line but it is moving towards reporting a bullish crossover.

On the derivative front, NIFTY January futures have  added over 1.70 lakh shares or 0.97% in Open Interest. This shows that some shorts have been added in yesterday’s session and no offloading or unwinding has been observed.

Overall, if we look at the pattern analysis, the Markets have survived the 50-DMA and have successfully taken its support at Close levels after maintaining it couple of times. In event of any downside, this level is likely to act as major support. In other words, the Markets shall have no structural breach so long as it maintains the levels above of 6190. However, this would be consolidation and any significant up move shall occur only after it moves past the levels of 6250.

All and all, given the pattern of the lead indicators, it is very much likely that the Markets resumes its upward movement after some consolidation. The favourable WPI and CPI numbers will certainly aid to it. This is what the lead indicators say, at least as of now. Therefore, while continuing to avoid shorts, any downside should be used to make selective purchases. Overall, cautious optimism is advised for today. 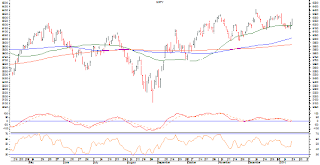 Today, we might again see a subdued opening today as the Markets are expected to open on a flat to mildly quiet note and look for directions again. The Markets have given buoyant indicators after yesterday’s rise and after some consolidation again, the overall undercurrent still remains distinctly bullish.

The RSI—Relative Strength Index on the Daily Chart is 56.2132 and it remains neutral as it shows no bullish or bearish divergence or any failure swings. The Daily MACD, though it still continues to trade below is signal line might attempt positive crossover in coming days.

On the derivative front, the NIFTY January futures have added over 5.28 lakh shares or 3.10% in Open Interest. This is certainly positive as we can clearly interpret that the rise that we saw yesterday is not just on account of short covering. Fresh longs have been seen added across NIFTY and stock futures.

Overall, the Markets have attempted a breakout and after attempting support at its 50-DMA for couple of times in last fortnight. The Markets have managed to successfully hold on to that support and has attempted a reversal  with the yesterday’s up move. Even if the Markets consolidates at these levels, it is certainly likely to keep its head above the critical supports and prepare for further continuation of the up move in coming sessions.

The Markets will give reactions to WPI and CPI inflation data coming tomorrow, which is expected to be better and lower. Overall, given the structure on the Daily Charts, the Markets may again see brief consolidation with a positive bias. In even of some range bound movement, selective purchases may be continued to be made. Overall, positive outlook is advised for today.