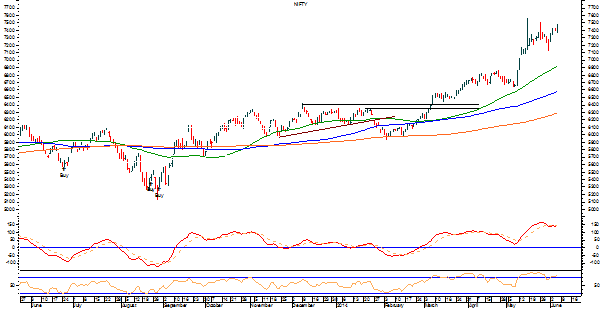 Today as well, expect the Markets to open on a flat to mildly positive note and trade positive at least in the initial trade. By now, the Markets have been trading in “overbought” territory and it has been constantly shedding Open Interest since last several sessions. There are high chances that the Markets opens positive but later pares its gains as we go ahead in the session.

The lead indicators continue to paint a sorry picture on the Daily Charts. The RSI—Relative Strength Index on the Daily Chart is 74.9364 and it does not show any failure swings. However, the NIFTY has set a new 14-day high while RSI has not and this is clear Bearish Divergence. Further, it continues to trade in “Overbought” territory. The MACD has reported a positive crossover and now trades above its signal line. On the Candles, an engulfing bearish line has occurred. If the engulfing bearish occurs during an uptrend which is the case with NIFTY, it may be a last engulfing top which indicates a formation of a potential top. However, this requires confirmation today.

On the derivative front, the NIFTY June futures have shed over 10.73 lakh shares or 7.10% in Open Interest. This very clearly signifies that the Markets have risen on back of short covering yesterday and no clean buying has been reported.

All and all, given the above reading, the Markets are trading at precarious levels and with the lead indicators continuously pointing towards long overdue correction, profits should be protected at higher levels and over leverage should be avoided. While maintaining ultra caution of making new purchases, it should be done on a very selective basis. While maintaining more liquidity, continuance of high degree of caution is advised for today. 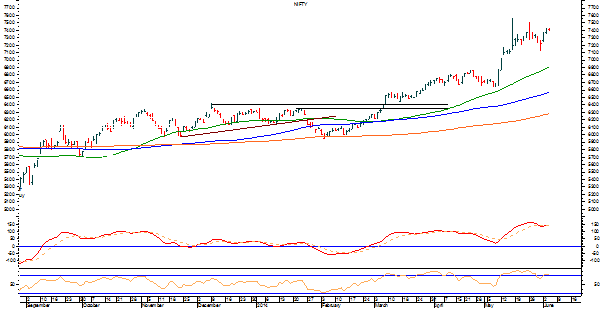 Today, expect the Markets to open on a flat and quiet note again and look for directions. The Markets have been paring serious open interest since last three sessions; it is likely that the Markets continues to consolidate or shows some correction which is imminent and overdue for the Markets to turn healthy. Given this reading, the analysis once again remains more or less on similar lines that of yesterday.

The lead indicators continue to show bias towards either consolidation or downside. The RSI—Relative Strength Index on the Daily Chart is 71.9917. Though it is neutral and does not show any failure swing or bullish or bearish divergences, it continues to trade in “overbought” territory. The Daily MACD too remains bearish as it trades below its signal line.

On the derivative front, the NIFTY June futures have shed over 7.38 lakh shares or 4.66% in Open Interest. This very clearly indicates that offloading has continued in the NIFTY futures.

Going by the pattern analysis, as we had mentioned yesterday, the Markets have attempted to achieve a breakout on the upside on the Close Charts. While it has done so on the Close Charts, it is yet to achieve a breakout on the Daily High Low Charts. While this happens, the Markets have already turned “overbought”.  Under pattern, usually Markets either consolidate or usually corrects from these levels. Any breakout achieved while remaining “overbought” is unhealthy and usually not sustained.

All and all, given the above reading, we reiterate our yesterday’s policy to remain very modestly leveraged in the Markets. Any longs that are taken should be taken very selectively and on the defensive side. While protecting profits at higher levels, continuance of very cautious approach is advised for today. 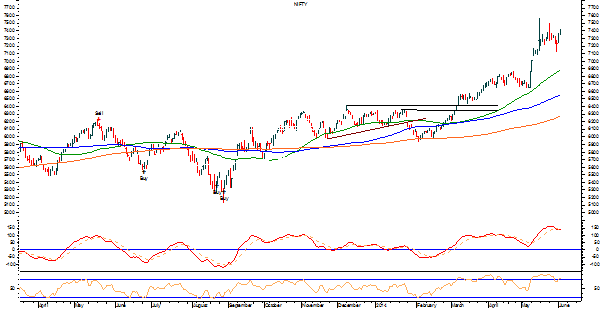 Today’s analysis remains more or less on similar lines that of yesterday. The Markets are likely to open on a flat and quiet note and look for directions. Even if its continues to show some strength, they are now trading “overbought” and there are all chances that the Markets show some corrective actions which are now overdue and imminent given the technicals, pattern analysis and the F&O data as well.

For today, the levels of 7445 and 7470 would act as immediate resistance levels for the Markets. The supports exist much lower at 7340 and 7270 levels.

The lead indicators too continue to show weariness and bias towards impending correction in the Markets. The RSI—Relative Strength Index on the Daily Chart is 73.5097 and it does not show any failure swings. However, the NIFTY has formed a new 14-day high whereas the R SI has not and this is a very clear Bearish Divergence. Further, the RSI now trades in “Overbought” territory. The Daily MACD continues to remain bearish even after two days of robust gains as it trades below its signal line and is bearish.

On the derivative front, NIFTY June futures have shed over 6.54 lakh shares or 3.96% in Open Interest. This very clearly indicates that unwinding of existing positions is done and the rise that we saw yesterday has been clearly on back of heavy short covering.

Going by the pattern analysis, the Markets have attempted to move past the  Double Top Formation of 7381 at Close levels. Though it has moved past this double top at Close levels, they trade much below the Double Top formation on Daily High Low Bar Charts. To add to this, they have now entered the “overbought” condition with continuous reduction of  Open Interest in last two days. This translates into conclusion that the Markets shall not achieve a clear cut straight forwards breakout but would continue to either consolidate OR correct from these levels.

All and all, while continuing on yesterday’s lines, we continue to reiterate to refrain from creating over exposures in the Markets. Fresh purchases should be done on extremely selective basis and should remain highly stock specific and defensive. Over, while maintaining liquidity, continuance of cautious approach is advised for today. 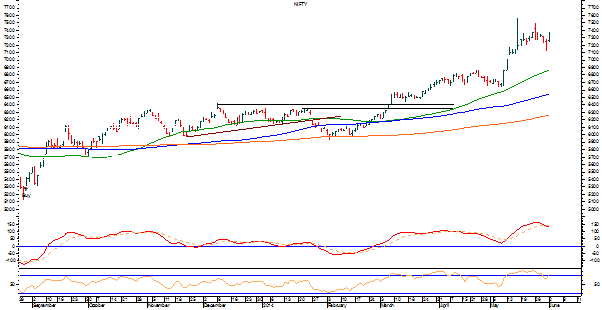 Brushing all technicals aside, the Markets surged yesterday on back of huge short covering. Today as well, expect the Markets to open and trade mildly positive, at least in the initial trade. All possible technical readings suggest the Markets are now overdue for a serious correction but it has been sustaining just on the back of FII inflows and given this reading we now sound a serious voice of caution against taking any blanket positions in the Markets.

All lead indicators suggest otherwise what is happening in the Markets. The RSI—Relative Strength Index on the Daily Chart is 71.3058 and it is neutral as it shows no bullish or bearish divergence or any failure swings. However it trades in ‘overbought’ condition. Further, Daily MACD too continues to trade below its signal line and it is bearish despite yesterday’s upsurge.

Going by the pattern analysis, the Markets have been consolidating after touching 7500 twice and this consolidation has been in a broad 200+ point range. However, even while being in consolidation mode, the Markets are currently “overbought” and any breakout on the upside would make it further overbought. This is not a good technical signs and the Markets would sustain just because of inflows but will be extremely unhealthy and with questionable sustenance.

Overall, at this point, given the technical readings, the overbought condition of the lead indicators, we now sound a voice of serious caution against any blanket buying in the Markets. The Markets would also react to the RBI credit policy later today. The overall consensus is towards no change in the key rates but given the tendency of the Government to keep curbing the autonomy,  the outcome cannot be predicted. Under such circumstances it is strongly advised to stick to defensives while making new purchases and maintain high degree of caution for today.